How to prepare squid, cuttlefish and octopus (cephalopods)

The flesh of cephalopods (such as squid, cuttlefish and octopus) must often be tenderised before cooking. This can be done by:

Overcooking will toughen the flesh. It is best cooked using: 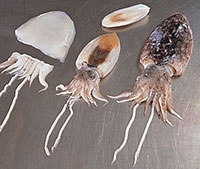 Remove head, guts, arms and tentacles from the body. Grasp the animal with one hand and reach inside the body with your other hand, using your fingers to gently pull away the arms, tentacles, head and guts. 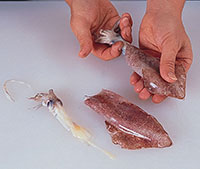 Wash the tube, which will be empty except for a mucous membrane and transparent "pen". Pull the pen and membrane away under cold running water.

Pull the skin off the tube and fins. Do this under cold running water, using your fingers. Discard the skin. 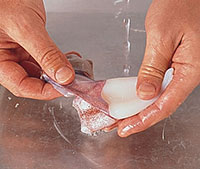 Remove the ink sac. The narrow ink sac is attached to the head, it can be retained and used for sauces. If the sac is broken, the ink can be washed off with cold running water without affecting the quality of the squid or cuttlefish. 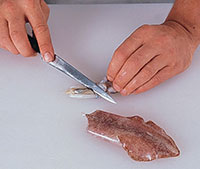 Cut the tentacles and arms from the head. These can be eaten, but the remains of the head which contain the guts and small hard beak are discarded. 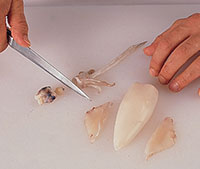 The tube can be left whole and stuffed, or sliced into rings. The flaps can be sliced and the tentacles and arms can be cut into bite-size pieces. The flesh can also be cut into squares and scored in a criss-cross pattern for barbecuing.

Tenderise by using the methods described above.

Octopus can be prepared using either of the method A or method B below. After preparation, tenderise.

This method allows the octopus to remain in one piece. Under running water:

Using a small knife, nick the membrane just inside the base of the head.

Turn the head inside out, through the opening at its base.

Pull away the guts and beak, while washing the inside of the head.

Turn the head back to the right way out.

Use your fingers to remove the skin of the head.

On a clean cutting board:

Cut away the skin of the head and the guts. These can be discarded although the ink sac is edible. The eyes can be cut out and discarded if not needed.

This method is simple and quick.

Cut out the eyes by slicing either side. The eyes can be eaten, but are usually discarded.

Remove the hard beak in the centre of the arms.

Clean out the head by removing the guts, which are discarded, and the ink sac, which can be used for sauces. Wash the head under cold running water.

Optional: using your fingers, peel the skin from the head and, if desired, from the arms. 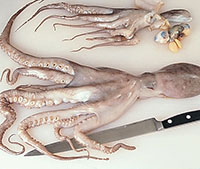 The head can be kept whole and stuffed, or cut into rings. The arms, depending on size, can be left whole or cut into pieces.

The skin can be loosened by blanching the octopus, making peeling easier. This should be done before cooking. If it is not done correctly the octopus can be very tough, especially if large.