How to clean your seafood

For most purposes, finfish are gutted through the stomach. This is a quick and convenient method:

1. slit open the belly from the ventral opening to the gills. 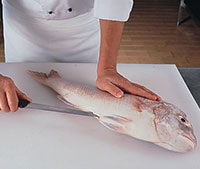 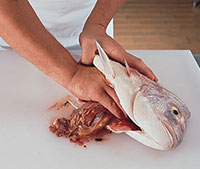 3. rinse out the gut cavity with cold running water. Depending on the species, you may need to use a spoon or knife to scrape along the vertebrae in the gut cavity, to remove the kidney and any remaining blood. Once this is done use the fish as soon as possible to limit bacterial growth.

Gills are best removed because they are bitter tasting and cause the finfish to go "off" more quickly due to their blood content and high level of unwanted bacteria.

1. fan out the gill flap and cut along its top. Repeat on the other gill flap. 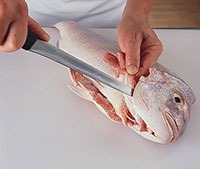 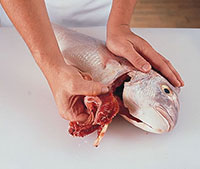 If the finfish is to be skinned scaling is unnecessary as both skin and scales can be removed together. In some cases the scales assist the skinning process by holding the skin together.

1. use short firm strokes with a scaler or the back of a knife, from the tail towards the head (shown here with a yellowfin bream). Repeat on the other side. 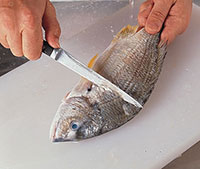 2. wash the finfish in clean, cold running water to remove any loose scales. 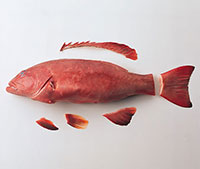 If you are serving finfish whole, the fins and tail can be trimmed to an attractive shape. Trimming is not necessary if you are going to fillet.

To fully trim, use a pair of heavy-duty food scissors and cut the fins and the tail as close as possible to their base. If you wish to leave the tail on, it is best to trim the end so that it keeps its shape, but does not burn and shrivel when cooked. Scoring 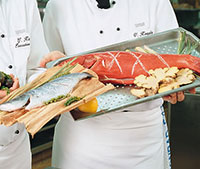 Whole finfish or thick fillets are often scored before being baked, grilled or barbecued:

When to remove the head:

When filleting, do not remove the head.

For most finfish:
Place the knife behind the gill cover and pectoral fin and cut all the way through.

For flathead:
Separate gill cover and body. Insert the knife at 45° to the board and then in one action cut right through the backbone. This will leave the fillet with the bones in and the wing (lug) on. 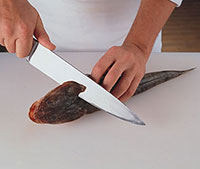 For large heavy-boned finfish, such as emperor, yellowtail kingfish and tuna:

1. opening the gut cavity, cut the first vertebra—just behind the head.

2. holding up the gill cover, cut behind the small bone behind the head. Repeat on the other side. 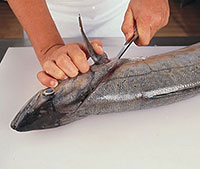 3. pull the head off backwards. 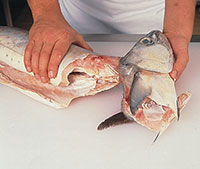 A lot of the flavour and nutrient-rich finfish oils are found just under the skin and are lost if the finfish is skinned. However, oily species such as mackerel and mullet may be better skinned to reduce the strength of the flavour. It is also necessary to skin the few finfish that have very tough or unappetising skin, such as shark.

It is best to skin roundfish after filleting because the skin helps hold the flesh together, the fish is easier to handle and the method is more time-efficient. It is easiest to skin a flatfish while still whole

1. lay the fillet skin side down on a board. Cut vertically through the flesh, to the skin, about 1 cm from the tail end.

2. press a finger on the exposed skin at the tail end. Insert a knife at a shallow angle beneath the flesh. Keeping the blade at a slight angle but almost parallel to the skin, cut away from you with a smooth stroke to separate the fillet and skin. While cutting one way, pull gently on the skin in the opposite direction. 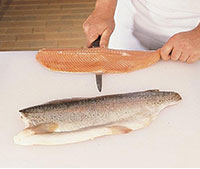 Skinning can be done only if the knife is sharp. Do not saw the flesh, as this could damage it.

2. make a cut through the skin near the base of the tail, to separate the skin from the flesh. Be careful not to cut the flesh. 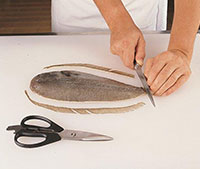 3. pull the skin off towards the head. Place your free hand on the tail, moving your hand up as the flesh is exposed. This helps prevent the flesh from tearing. 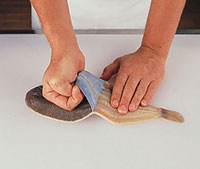 4. repeat on the other side.