How to butterfly fillet your fish

Butterflying is another way of filleting a finfish. Rather than taking the fillets away from the backbone, the bone is taken out. The result is one fillet, not two. Usually the head and tail are left on to hold the finfish together during cooking. If you are boning roundfish, bone through the stomach unless they are to be stuffed, in which case it is better to bone them through the back.

Roundfish — butterflied by boning through the stomach

1. after gutting, gilling and trimming, continue the stomach slit as far as the tail.

2. hold the cavity open to expose the backbone and ribs, which are embedded shallowly in the flesh and covered by membrane. 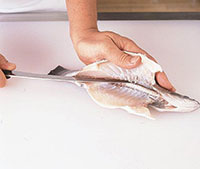 3. working from head to tail, nick the membrane with firm careful strokes, cutting the rib cage free from the backbone.

4. open the finfish as wide as possible without tearing the flesh. Gently run the knife down both sides of the backbone, cutting the bones free and being careful not to cut the skin. 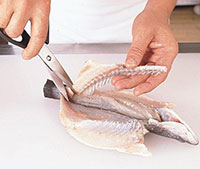 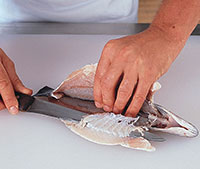 6. remove the ribs by holding the knife parallel to the flesh, cutting just under the rib cage.

Roundfish — butterflied by boning through the back

This method of boning is normally used if you are stuffing the gut cavity.

cut along one side of the upper surface (close to the dorsal fin) from the tail to the head.

lift the top portion of flesh and gently cut the flesh from the bone, working to the belly side, and open up.

turnover and repeat cuts on the opposite side.

use food scissors to cut the backbone at the tail end, and gently remove the backbone with the attached pin bones.

trim the long-based fins and remove the head. The skin is usually removed as well.

on one side, cut into the flesh along the "top" edge of the flatfish. Gently lift the flesh with one hand, and cut it from the bones. Continue to the edge of the rib bones, but do not cut all the way through. Repeat on the opposite side.

use food scissors to snip the backbone at the head and tail.

while holding back the flesh, snip the pin bones and then repeat on the opposite side.

gently lift the backbone at the tail and pull away from the flesh.

A butterfly fillet from a flatfish remains.

Firm thin fillets are particularly suitable for folding, rolling or plaiting. These forms may be used to provide more regular shapes and therefore ensure more even cooking of the finfish. When folding or rolling, a stuffing can be added. This method can be used for such finfish as whiting, ling, trout and coral trout.

When preparing a fillet for plaiting, the fillet can still be kept in one piece.

It is important to fold or roll the skin surface on the inside because the connective tissue on the skin surface will shrink when cooked, keeping the roll tight. This method can also be used for a skinless fillet.