Pairing professional fishing crews with leading Australian chefs has provided the formula for a special television series to showcase the hard work involved in bringing Australia's diverse and high-quality seafood to consumers. The FRDC has partnered with well-known water warrior and recreational fishing host Andrew 'ET' Ettingshausen to develop the six-part pilot series Seafood Escape. From the depths of the ocean to the heights of culinary experience, Seafood Escape takes the viewer along for the ride.

Season One of Seafood Escape aired on Channel 10 and Southern Cross nationally across Australia in January and February 2017. As well as showcasing the action and adventure involved in sourcing sustainable seafood, the show goes an extra step to examine how seafood has been incorporated into our national cuisine. It also highlights the environment, taking viewers to some of the country's most scenic coastal communities.

Over the past decade, the FRDC has invested in activities aimed at raising the profile of Australia's fisheries and its Research, Development and Extension Plan 2015-20 places even greater emphasis on this. It's about letting the Australian community know that our fisheries are well-managed, professional operations.

Season Two aired 2018 and showcases the work that goes into catching fish and how to cook them.

In the manner of Gourmet Farmer and Surfing the Menu, Seafood Escapes gets down and dirty – and wet – working out where our food originally comes from, then follows it all the way to the plate in interesting workaday and trendy restaurant settings. And along the way, it takes viewers to some of the most scenic coastal communities ever seen on television.

Each of the six half-hour episodes is set in a different state of Australia. It sets the scene of the coastal community which is the destination for this week’s seafood escape, then introduces the local fishing skippers and crews – and crucially, a local chef and his or her restaurant – who are the real stars of each show.

This series was proudly sponsored by FRDC. 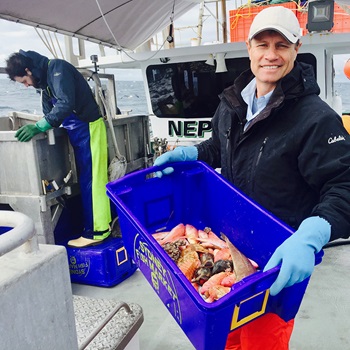 Through its investment in the Appetite for Excellence program, the FRDC was able to identify chefs to participate, asking past finalists of the program to join Andrew Ettinghausen on his quest and experience first-hand where the fish they use in their restaurants comes from. The biggest challenge was fitting in with everyone's busy schedules for filming and then, of course, getting the weather to cooperate. Filming took a tight 16 to 18 weeks from start to finish.

Each of the six half-hour episodes is set in a different part of Australia. The shows then follow a steady format, first setting the scene of whichever coastal community is the destination for that week's Seafood Escape. We then get to meet the local fishing skippers and crews – and, crucially, a local chef and their restaurant. The show combines both observational documentary and contemporary cooking show style.

Western Australian fisher Brendon Watts was keen to be involved and showcase the Mandurah mullet fishery. Despite his initial apprehension about taking out the television crew and Adam Sayles – the head chef at Perth's St Michael 6003 restaurant – he managed to enjoy himself. "We all had a whole lot of fun," he says. "Everything went well, ET was great, chef Adam was great."

Brendan Pratt, head chef at Indiana Cottesloe, who spent the day with the fishers from Fremantle Octopus, is very supportive of the show. "We had a great few days. We spent the day on Friday out with the occy boys learning about what they do and how they do it. I had no idea of the work these boys put in. It was a great few days and not only is Andrew a great bloke, his team were fantastic."

Through its investment in the Appetite for Excellence program, the FRDC was able to identify chefs to participate, asking past finalists of the program to join Andrew Ettingshausen on his quest and experience first-hand where the fish they use in their restaurants comes from.

Life as a TV presenter isn't always glamorous or fun. Andrew Ettingshausen says the Queensland shoot in season one – reef fishing for coral trout with chef Jacob Nicolson – was the most difficult he has done. He became ill the night before the shoot, which started at 3am, but still went ahead, although he spent most of his time on board, curled up on the back deck, drenched and sick.

Jacob Nicolson paid tribute to Andrew's perseverance, noting that after being sick he would feel okay for a short while and join the others, before whatever he had caught brought him back to his knees. He counts it as miraculous that Andrew was again well enough to sample the dish that was cooked back at the restaurant.

One of Sydney's best seafood chefs, Josh Niland, owner of Saint Peter in Paddington, went out with skipper Richard Bagnatto and experienced deep sea trawling. Josh Niland was impressed with the professionalism of Richard and his crew. "It didn't hurt that we had perfect weather and had a good day catching flathead, jackets, gurnard, whiting and other species which I use regularly at Saint Peter," he says.

Seafood Escape has been well received by viewers, the fishing industry and the network. Importantly for the FRDC, there has been strong support from industry, which sees the program as a positive effort to showcase its stories and the sector's place in the community. Many fishers were very keen to be involved and the show could not have been produced without the support of the seafood industry councils and commercial fishers.

The FRDC and Andrew Ettingshausen have now produced a 2nd series, to showcase how more fisheries and aquaculture operations supply great fish to consumers across the country and the globe.