An appetite for change is guiding Australia’s abalone industry into a new era of sustainability, with stakeholders from different zones and states sharing ideas and strategies 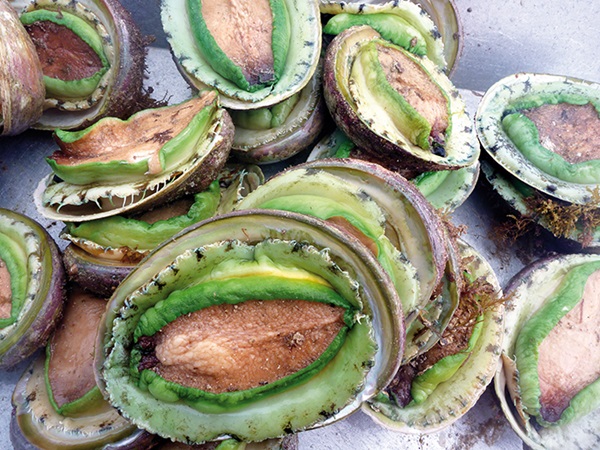 The abalone industry is taking an increasingly collegial approach to managing its stocks, which span five jurisdictions in Australia’s southern waters.

Abalone Council Australia (ACA) chief executive officer Dean Lisson says the strengthening national perspective is not expected to alter the state-based fishery-management system, but it is encouraging stakeholders to head out of their bunkers to share insights, ideas and experiences.

Recent examples of this include short workshops in South Australia and Western Australia, and a two-day abalone fisheries management and assessment workshop in Melbourne. There was also the Australasian Abalone Convention in Hobart, in July 2019 – the pinnacle event for researchers, industry and managers engaged in a wide-ranging discussion about how to achieve sustainability in a changing marine environment.

In FRDC’s latest abalone stocks report, the combined ‘depleting’ and ‘depleted’ abalone stocks outnumber those assessed as ‘sustainable’. While serial depletion from fishing may be part of the problem, some stocks are recovering from specific, severe setbacks.

In 2005-06, an abalone viral ganglioneuritis (AVG) outbreak killed 90 per cent of stocks in Victoria’s western zone. In WA, a warm-water event in 2010-11 caused significant mortalities, as did a similar event in Tasmania in 2016.

Meanwhile, the strengthening southward movement of the East Australian Current brings another threat to Tasmania, in the form of the invasive Centrostephanus rodgersii, the long-spined sea urchin, which eats out abalone kelp habitat, creating denuded underwater rock barrens.

“The current has gotten stronger, and Centrostephanus’ range is extending south from NSW,” Dean Lisson says. “Its footprint is now overlapping abalone habitat in Tasmanian waters and it’s one of the big challenges the industry is facing.” 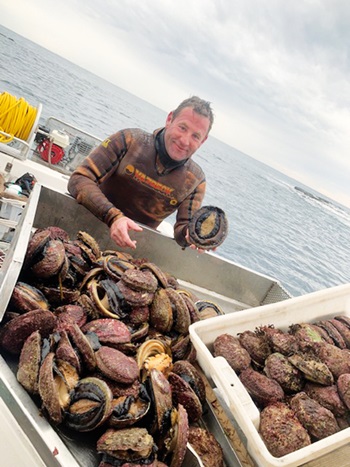 Depending on the location and species, abalone can take up to eight years to reach a harvestable size of 110 to 155 millimetres, meaning they are particularly vulnerable to overfishing.

“Since we first started using it in 2004, it’s given us time, depth and location data about the dive and linked it to fish biomass data that the deckhand collects,” he says. This has improved transparency in the government decision-making process around total allowable commercial catches.

“It allows science to be validated by observation and vice versa. I can get maps that show me the average size of the fish I’m catching, and if it’s dropping by a millimetre or two, I’ll talk to other divers about it, and to the researchers.

“If we need to react, we can do it overnight. Each year our stock numbers are growing and we’re pretty proud of that.”

WADA is also driving a knowledge-exchange project funded by FRDC and ACA, which began in September 2019 and involves divers from all states taking part in dives, culminating with a workshop.

Craig Fox says WADA’s workshops enable the group to share its recovery experience, which started with research into Victoria’s western zone abalone, co-funded by FRDC. The research was completed in 2008 and the research report laid the foundations for information on biomass, modelling and predicted trajectories of recovery. It helped inform industry and government responses to the decline in abalone populations.

Based in Esperance, WA, abalone diver Kerry Rowe also holds abalone licences in Victoria’s western zone, which has allowed him to see firsthand how data can help rebuild stocks. It encouraged him, along with Augusta-based diver Nathan Adams, to initiate WA’s first abalone-recovery workshop in June 2019.

Abalone populations in the Augusta sub-area were hard hit by a warm-water event in 2010-11 and the workshop provided an opportunity for WA divers to connect with those from Victoria’s western zone to discuss recovery strategies.

“We are currently using three-year rolling averages in WA as an indicator for our quotas and we need to be able to react quicker than that,” Kerry Rowe says. “In WA, we’re looking at blocks of 10 square nautical miles and that management area is too big to give us anything more than crude data.”

He says the workshop helped to encourage Augusta’s divers to invest in data-logging technology that will help better monitor changes in fish stocks and in formulating and enacting appropriate management responses.

Also in WA, and with industry and state government endorsement, Steve Beres and his father George Beres are trialling the efficacy of building stocks off Hopetoun, where they have exclusive fishing rights to defined ‘paddocks’. This allows abalone to be shifted to new areas to increase their spawning range. “It’s been going for three years and the results are spectacular,” says Kerry Rowe.

Another initiative in WA is the ‘ranching’ facility Ocean Grown Abalone, developed by the Adams family. Ranching abalone involves growing hatchery-bred juveniles on artificial reefs in the Augusta sub-area. “It’s an interesting production model to look at and weigh up the pros and cons of potentially increasing the future productivity of wild abalone coastline,” Dean Lisson says.

In Tasmania, the merits of larval seeding to produce fertilised spat that are pumped on to the ocean floor are also under investigation. “We can cut quotas and lift size limits, but there may be a case to consider augmentation using stock enhancement,” says Dean Lisson.

Stock rebuilding and fishery productivity is the primary focus of ACA’s research and development investment, through its industry partnership agreement with the FRDC. Dean Lisson says the partnership makes the most of the limited funds available, as it prevents duplication and invests in outcomes that can be applied across all states.

“Diver feedback on conditions of stock is a resource for the industry,” she says. “‘Ab’ divers know their patches well. We all talk regularly and we’re able to do blue-sky thinking about what the industry will look like in five or 10 years. It comes down to leadership from management and industry, and we’ve got industry leaders who are committed to the industry’s long-term sustainability.”

As with most jurisdictions, SA’s commercial quotas are reviewed regularly and independent scientific surveys are coupled with catch data and diver observations to inform the decision-making process.

She says data from surveys, loggers and observations all help to create a picture of stock health and help make any reduction in quota when stocks of “appropriately sized” animals drop.

“Once you see that decline, the question is: how big a cut do you need to take? It can vary from 10 to 70 per cent, and if you understand the fishery, you’re more likely to choose the right figure,” she says.

The Victorian Fisheries Authority (VFA) has fully delegated the abalone stock assessment of the Victorian fishery’s Western Zone. In an Australian first, the Western Abalone Divers Association (WADA) has undertaken the stock assessment for Blacklip and Greenlip Abalone in their zone. This development reflects VFA’s commitment to co-management.