An extension of the acoustic network around the Australian coastline is set to provide new information about tagged fish and other marine species, helping to improve fisheries management 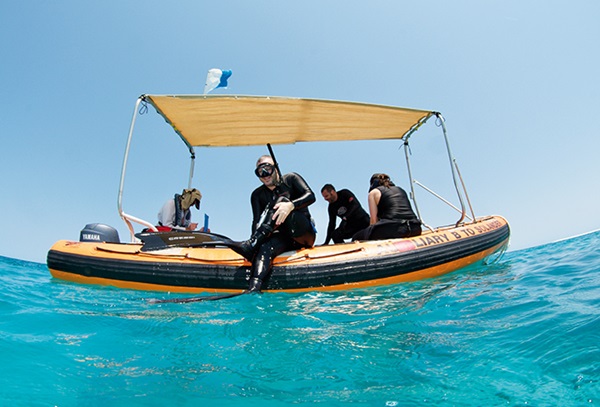 Dotted around Australia’s extensive coastline are hundreds of acoustic marine receivers – listening stations that form part of a national network, tracking the progress of tagged marine animals as they travel to feed, breed and play.

The receivers have also been the focus of a one-year FRDC-funded study designed to optimise their location, encouraging more researchers to tap into the IMOS network and generate information to improve fisheries management.

The project has also taken a new approach to analysing acoustic network data, revealing new information about the movement and connectedness of fish populations.

Acoustic tags attached to marine animals emit pings detected by underwater receivers as the animals swim by. That ping creates a record of travel that is logged with the IMOS Animal Tracking Facility (ATF).

Through the ATF, IMOS provides the backbone for the national marine acoustic telemetry network. This includes a control centre and database in Hobart, 14 fixed major oceanographic recording installations and almost 250 permanent acoustic receivers deployed around the country.

Anchored to the ocean floor, the IMOS receivers are often deployed in lines, some up to 35 units long, creating a gateway that can extend from the shore out to the edge of the continental shelf.

A major strength of the ATF is its ability to exponentially increase its listening capacity through collaborations with the owners and operators of other acoustic receivers.

These operators – universities, public and private research organisations and government agencies – can choose to link their receivers into the ATF by putting their receiver data into the IMOS database.

By contributing their data, these researchers gain access to any records of the animals they are studying on the IMOS receivers, as well as records from other research groups using the database. The combination of researcher and IMOS receiver data effectively amplifies the information available about the movement of animals, especially if they travel long distances.

By tapping into the network, individual researchers can expand the receivers available for a specific research project to the many hundreds operating around the country at the same time their project is running. Some projects run just a year or two; others span decades.

Since the ATF was first established in 2007, there have been almost 10,000 receivers linked into it at some point, recording the movement of 137 species including sharks, rays, fish, rock lobsters and even dugong. 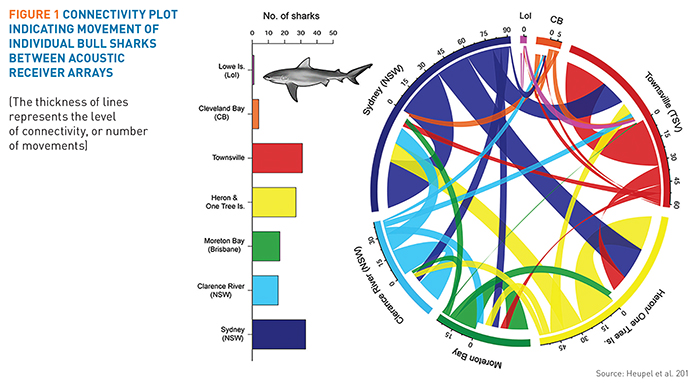 Marine scientist Michelle Heupel has been a long-time supporter and advocate of the ATF and has made extensive use of its network as a researcher with the Australian Institute of Marine Science (AIMS).

She points to a recent Bull Shark (Carcharhinus leucas) tracking project as demonstrating the network’s value. Her research involved tagging and tracking Bull Sharks on the central Great Barrier Reef to study where they went. In an unconnected project, researchers at the New South Wales Department of Primary Industries (NSW DPI) had also been tagging and tracking Bull Shark movements in Sydney Harbour. Both AIMS and NSW DPI had separately deployed acoustic receivers at their selected locations. By linking into the ATF, they were able to use IMOS and other receivers to track sharks tagged in Queensland and Sydney.

They discovered sharks from both locations were travelling long distances, across state boundaries. Sydney Bull Sharks were pinged heading north to the southern and central Great Barrier Reef and back again, while those on the central reef were travelling south, below Brisbane, and sometimes into NSW (Figure 1).

“We knew these sharks were travelling big distances, but we hadn’t realised quite how far,” Michelle Heupel says. “Without the IMOS network, both research projects would have reported just on their own locations, instead of being able to jointly draw on this amazing, bigger picture of shark movements and connectivity.” These results reveal how acoustic telemetry data can identify cross-jurisdictional movements and help inform management of species.

Last year Michelle Heupel was appointed as the new director of IMOS and is now overseeing the final stages of its recently approved $250,000 expansion of the ATF, which is expected to optimise tracking for high-priority fish species.

This reconfiguration and expansion of the network followed from FRDC-funded workshops held with the national Fisheries and Aquaculture Research Providers Network (RPN), a government-level committee that supports national research priorities.

RPN members helped to identify gaps in the ATF’s acoustic tracking capabilities and supported an optimised configuration of the IMOS permanent receivers to best fill those gaps, with target commercial and recreational fish species in mind (see breakout right).

IMOS relies on its collaborating partners to help deploy and maintain receivers and to collect the data they record, which is usually done at six-monthly or yearly intervals. Through its bulk purchasing power, IMOS helps researchers with discounts on receivers and the receiver battery packs. However, individual research projects are responsible for buying the acoustic tags and tagging fish. 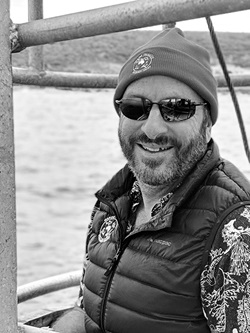 As part of the FRDC project, a network analysis of existing ATF data for high-priority fish species was undertaken. ATF leader Robert Harcourt says the network analysis was a new approach and demonstrated the connectivity of fish stocks – or lack of it – in new ways.

Yellowfin Bream (Acanthopagrus australis) data identified several populations of the species, one larger and highly interconnected with two smaller, apparently independent, populations. The tracking data also confirmed the importance of estuaries along the NSW coast for the bream, which moved in and out of them as they travelled along the coast.

Robert Harcourt says the acoustic tracking is limited by location of receivers; if there are no receivers, then there’s no information. But he sees it as valuable in complementing existing genetic tools.

Genetic data identifies how populations broadly connect over multiple generations, on an evolutionary scale. However, it can be influenced by just a few highly mobile, fecund individuals, rather than being representative of large interactions between populations.

The acoustic data follows the movement of fish populations over a shorter timeframe – an everyday, ecological scale that more closely aligns with fisheries management and fishing cycles.

The acoustic tagging also complements traditional methods of mark–recapture studies, where fishers put a tag on a fish and record where it was released; recapture data is provided when another fisher later catches the same fish. Such methods reveal movement between two locations, but no indication of where the individual fish moved in between these points.

Acoustic tracking can also help explore population-level patterns of habitat use, which are often outside the scope of a single study.

With changing ocean conditions, such as the southward movement of the East Australian Current, long-term tracking data is already revealing changes in the movement patterns of species.

“These studies using acoustic tracking are helping to give us a handle on what fish stocks are actually doing in the oceans, year by year,” Robert Harcourt says.

And as research agencies and fisheries managers invest in further tagging programs for priority species, the IMOS ATF is expected to contribute information that will be crucial in helping to adapt fishing practices and conservation management to the changing ocean environment. 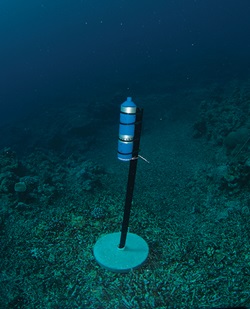 Anchored to the ocean floor, one of the acoustic receivers used extensively in the national network to track fish movements.
Photo: IMOS

The Integrated Marine Observing System (IMOS) uses three types of receivers all anchored to the ocean floor in some way.

The VR2W model is about as big as a one-litre drink bottle and comes at cost of about US$1500. They are quite robust, says Robert Harcourt, leader of the IMOS Animal Tracking Facility Tracking Facility, although Cyclone Yasi did take a few out. The VR2Ws are deployed by divers, who replace the batteries and data packs six-monthly or yearly.

Robert Harcourt says he tries to keep diving to a minimum, particularly in remote locations and where sharks might be a risk.

That is where the second tier of receivers, the VR2ARs, come in. These are attached to a modified sub-surface collar float that sits about 20 metres below the surface of the water, anchored via a chain to the ocean floor. (They occasionally get caught in trawler nets.) From a data-gathering viewpoint, they have an acoustic release system that helps to reduce the amount of diving needed to gather the data, but they cost about US$9000.

The most expensive and robust of all are a new design, the VR4, which sits on the ocean floor. It comes with a modem that allows data to be remotely collected from a boat, without retrieval, for as long as the battery lasts − usually about five years. These Canadian-designed receivers cost US$18,000 and are only used where there are strong currents or other dangerous elements.