Cultural recognition on the agenda

Indigenous philosophies of sustainability and reciprocity could be integrated into the management of Australia’s fisheries as a whole, says Stan Lui, chair of the FRDC’s Indigenous Reference Group 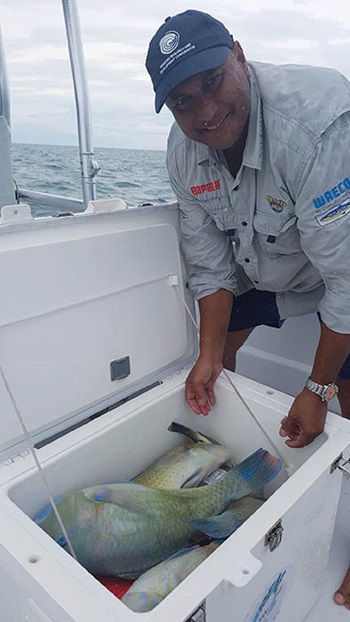 We are starting to see more consideration of Indigenous people and perspectives in the management of fisheries.

Without the political will and ministerial assistance of Richard Colbeck and Anne Ruston [both of whom have held the position of Assistant Minister for Agriculture and Water Resources] the changes to the Act would not have been possible.

This is a good example of things moving in that direction. It would be a good outcome if all the states provided the same kind of representation for Indigenous fisheries.

The next logical step is to include Indigenous wellbeing in the processes that fisheries managers undertake to assess ecologically sustainable development (ESD) and make fisheries decisions.

Indigenous people have always been part of the Australian environment and we continue to practise our culture and traditions in harmony with nature. Optimum utilisation is not our motivating factor.

I would like to see this extended to the ESD and ecological risk management processes that fisheries managers use to set total allowable catches (TACs) and decide on gear and other restrictions as well.

An allocation for cultural catches should be made at the same time that total allowable catches are set for the commercial fishery.

Indigenous bag and size limits, especially in the southern states, are basically the same as they are for recreational fishers. But cultural fishing, or traditional fishing, has a different purpose.

Indigenous fishing is usually based around cultural events and supplying food for gatherings such as funerals. For this kind of fishing, Indigenous people need more than a bag limit would provide, and this should be recognised in cultural allocations.

There would need to be some management procedures put in place.

I see that the recognised traditional owners of a particular area would be the custodians of the cultural allocation and they would need to provide permits and catch-recording documentation to Indigenous people to harvest fish beyond the standard bag limits, as part of that allocation, for a specific event.

Catch recording will be very important to ensure sustainability. It would not be an ad hoc breaking of bag limits. It would be for specific events.

Traditional owners coming from other areas would need to seek local permission to fish the cultural allocation, which would allow fishing to be regulated, but in the traditional way. This includes principles of reciprocation between different groups, and sustainable harvesting – leaving enough to ensure there will be fish for the future – and using traditional methods where that is appropriate.

This would also allow us to strengthen cultural connections; we would be able to take our kids down to the water and teach them the traditional way of harvesting and sharing the stories around
a place, passing on traditional knowledge.

It would be a good thing if legislation and court decisions were not needed in order to recognise Indigenous rights and practices. No one wants to see more cases going to court.

But many discussions have been had over and over again without resolution. Whether or not it is a good thing for Indigenous people, the courts and legislation are proving the only way to provide clarity and security around these issues.

More broadly, looking forward, I see that having Indigenous recognition in the Australian Constitution, and an Indigenous voice advising the Commonwealth Parliament, would help fisheries. We would be able to help make policies and suggest Indigenous amendments to policy and legislation so that it all works together.

Recent policy and legislation changes have been a positive step, but there is still a long way to go.