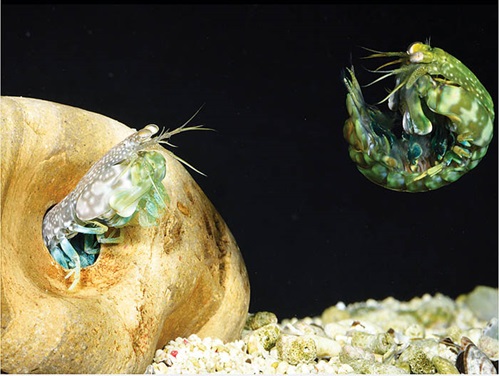 The ability of the mantis shrimp to survive attacks from fellow shrimp without being injured is providing inspiration for the creation of new lightweight protective materials.

The mantis shrimp’s secret is its tail appendage, called a telson, which can withstand blows from the dactyl club appendage of other shrimp – blows that can travel at the speed of a .22 calibre bullet.

Engineers have discovered that the telson, shaped as a territorial shield in ‘smasher’ species of mantis shrimp, prevents impact from reaching the rest of its body.

The telson shield has curved ridges, called carinae, and a helicoidal structure resembling a spiral staircase, which work together to absorb significant energy during a strike without falling apart, and preventing cracks from growing upon impact.

Researchers are continuing to investigate the telson’s properties, including how to manufacture these into new materials.

The research is underway in the US, at the University of California, Riverside, and Purdue University, Indiana, with funding from the Air Force Office of Scientific Research, and has been published in the journal Advanced Functional Materials. 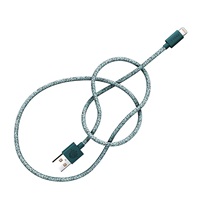 Every year more than 640,000 tonnes of fishing gear is lost or dumped at sea, with potentially fatal results for fish and other marine life that continue to be trapped in these abandoned nets. It may take hundreds of years for nets at sea to degrade naturally, breaking down into microplastics.

Le Cord has also replaced all braiding materials for new cables with nylon made of recycled PET bottle plastics and used recycled metal from illegal guns in the connector shells of the cords.

Based at Murdoch University in Western Australia, forensic entomologist Paola Magni is researching barnacle growth on shoes and clothing to help detectives figure out how long a body has been in the water.

Studying how barnacles settle and grow on different shoe types – trainers or leather shoes – she has found they can be used to provide information vital to an accurate crime scene reconstruction for bodies found in or washed up from the ocean.

She is now working with an honours student on a similar project with clothes. The pair placed different types of fabric – cotton, velvet, silk and neoprene – in the ocean for six months to see which material barnacles attached to and when. “The crustaceans act differently on different fabrics. We can backtrack with more precision the time [a body] spent in the water.”

Earlier this year Paola Magni won the Australian 2019 Australian FameLab title, which is part of an international science communication competition.

The Bureau of Meteorology’s general forecasts of sea conditions have the following specific definitions.

Slight seas will rock buoys and small craft, with waves between 0.5 and 1.25 metres.

Rough seas are deeply furrowed, with waves of 2.5 to 4 metres.

Very rough seas are highly disturbed, with steep fronts on rolling waves of up to six metres.

High seas are likely to cause foreshore damage, with steep fronts on rolling waves of up to nine metres.

Towering seas have waves up to 14 metres, and phenomenal seas, which occur during events such as cyclones, have waves of even greater heights.