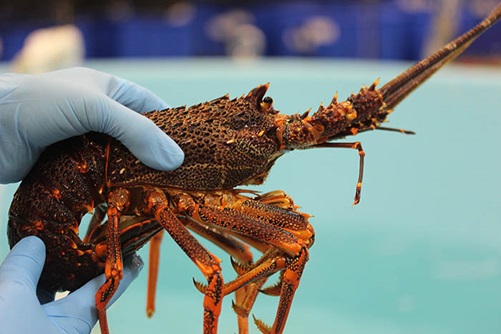 As many as 80 Southern Rock Lobsters were used in a single experiment as part of research into the effects of paralytic shellfish toxins on the species.
Photo: South Australian Research and Development Institute

It was a takeover of sorts, when the team leading a multi-species biotoxin research collaboration moved into the South Australian Aquatic Biosecurity Centre (SAABC) at Roseworthy, north of Adelaide last year.

The work specifically focused on the highly toxic dinoflagellate Alexandrium catenella. When this marine algae occurs in extended blooms, as it does in Tasmania, the toxins can accumulate in seafood species exposed to or eating the algae, or through the food chain – for example, when rock lobsters eat affected mussels. 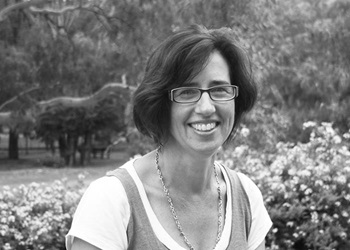 Once the toxins reach beyond a particular threshold in affected species, there is a potential risk that people who eat affected animals could suffer from paralytic shellfish poisoning.

At this point, it becomes a food safety issue, with the potential to jeopardise Australia’s international seafood markets. A. catenella was not a recognised threat before 2012, when Japan first detected paralytic shellfish toxins in a shipment of Tasmanian mussels, which was traced back to an algal bloom.

On discovering the toxin Japan immediately closed its markets to all Australian bivalves and it took more than six months for New South Wales and South Australia to regain access, although neither had been affected by the bloom. It took three years and multiple investigations for Tasmanian shellfish to re-enter the Japanese market. The 2012 bloom led to a temporary fishing closure along the Tasmanian east coast as a safety measure, and led to a direct loss of $8.6 million for the local seafood industry.

The A. catenella toxins are known to affect bivalve shellfish including oysters, mussels, pipis, clams and scallops, and to accumulate in parts of abalone, rock lobsters and giant clams; however, they have not been found at concerning levels in finfish.

Heightened surveillance and new protocols introduced in the years since have helped manage the risk of toxic blooms, which have continued to occur at varying intensities in Tasmania from early winter through spring for up to three months at a time.

These management practices mean that seafood purchased from commercial outlets will be safe to eat.

However, three of Tasmania’s leading seafood sectors – oyster, rock lobster and abalone – have come together in this latest collaborative research project based in SA to learn more about A. catenella and how they can improve their management strategies.

She says while different algae and toxins are found in all Australian marine waters, Tasmania is the jurisdiction worst affected to date, thanks to A. catenella. 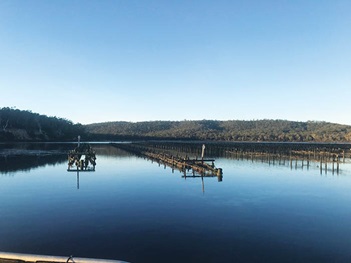 The project brought together research expertise from SARDI, the University of Tasmania (UTAS) and the Cawthron Institute from New Zealand, and has developed new research capabilities that will support the Southern Rock Lobster, Pacific Oyster and abalone industries into the future.

Unspent funds remaining from the Australian Seafood Cooperative Research Centre effectively paid for the hire and operation of space at the Roseworthy biosecurity centre, which is one of the few facilities in the country capable of hosting this type of research.

Industry bodies added their own funds, matched by the FRDC, for specific research within the broader operation of the centre. Contributors included Southern Rocklobster Limited, Abalone Council Australia Limited and the Tasmanian Oyster Research Council, as well as two private oyster producers. All up, the 12 months of research was valued at almost $1 million and is part of a larger, overarching project that includes the New Zealand Rock Lobster Industry Council.

As project lead, Alison Turnbull says it was a challenge to bring together experiments for the three different industry sectors, but all relied on the successful production of large volumes of highly toxic alga, initially sourced from Tasmania. While she took on the rock lobster component, Andreas Seger worked on the alga production and led the abalone experiments, and Navreet Malhi oversaw the oyster experiments.

The research evaluated rock lobster haemolymph, or blood, for testing paralytic shellfish toxin levels, but found this was not a suitable approach. It confirmed that testing the hepatopancreas, the equivalent of the liver, is the only way to accurately assess toxin accumulation, although this process requires dissecting the rock lobster, and five animals are needed for a valid test.

The research found there was no uptake of toxins by rock lobsters from direct exposure to A. catenella cells alone. This finding indicates there is no risk of toxin accumulation from bloom-affected seawater used in holding facilities on land, or in fishing vessels at sea, or where animals are held in sea cages in algae-affected waters, as may happen in New Zealand.

Initial findings on animal health showed the toxin had no observable negative impact on the feeding behaviour of the adult male rock lobsters used in experiments. However, Alison Turnbull says further work is needed to evaluate whether there are any effects on fecundity, or on juvenile rock lobsters.

In the laboratory experiments, rock lobsters fed a diet of highly toxic shellfish accumulated toxins at levels exceeding safety standards within four days. While such highly engineered diets are unlikely to occur in the wild, Alison Turnbull says the speed of accumulation has implications for the risk management strategies for the rock lobster sector. Further fieldwork focusing on rock lobsters will continue for another two years, and this has already found that residual traces of toxin remain in rock lobster viscera long after blooms have passed. While the traces of toxin are very low – well below the levels that might affect people eating the rock lobster –  further research will try to identify what is causing the continued presence of toxins, and how that might affect the accumulation of higher levels of toxins during an A. catenella bloom.

The outcomes for the rock lobster experiments were presented to the Tasmanian and New Zealand industry at the Southern Rock Lobster Trans-Tasman biotoxin risk management workshop earlier this year.

In separate work at UTAS Gustaaf Hallegraeff and Juan Dorantes-Aranda were able to use tissue from the biotoxin project to validate the commercially available Neogen paralytic shellfish toxin rapid test kit for use as a screening tool for Southern Rock Lobster. The kit can indicate within 30 minutes whether the rock lobster hepatopancreas contains toxins at levels high enough to be of concern. 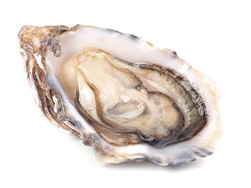 In practice, Neogen kits will allow fishers to sample rock lobsters from specific, potentially at-risk sites, and to wait for an all-clear, or further testing, before continuing to fish. Validation of the test kit also allows for ‘proof of absence’ testing for the Southern Rock Lobster industry as a whole and will underpin market confidence in the safety of the product.

Executive officer for Southern Rocklobster Limited Tom Cosentino says the research is crucial in ensuring Southern Rock Lobsters remain safe for human consumption and has contributed to risk management and response plans for the industry. “In this case we are actively in the game, instead of playing catch-up on biosecurity, thanks to this collaboration,” he says.

Previous research has validated the Neogen kit for use with Pacific Oysters, as a rapid and accurate indication of toxin accumulation. There has already been widespread take-up of the kits by producers in Tasmania.

The latest research has developed bulk samples of toxin-affected oyster tissue that will help producers to calibrate their equipment and testing protocols from year to year. Oysters Tasmania chief executive Sue Grau says these tissue samples could also support the industry’s efforts to have the Neogen tests approved for some regulatory purposes.

In the latest experiments, Pacific Oysters exposed to highly toxic algae exceeded toxin safety limits within only two days. However, a pilot trial has also successfully shown that oysters could potentially depurate toxins within four days. Sue Grau says the potential for oysters to depurate so quickly is a positive outcome for the industry. It could help individual growers remain in the market and for oysters more generally to maintain market share, which is jeopardised when extended blooms affect long-term product supplies.

Managing director of Shellfish Culture Ltd, James Calvert, says the business has worked with SARDI to establish a trial using its wet holding facility at Clifton Beach, in south-east Tasmania.

The off-the-shelf recirculation system has a 15,000-litre capacity and can hold up to 500 kilograms of oysters. It incorporates biofilters, with membrane, charcoal and ultraviolet filtration of water drawn from nearby Pipe Clay Lagoon to eliminate any potential contamination. 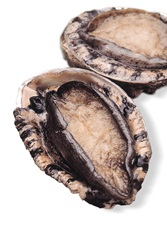 “We’re planning to test biotoxin levels in affected oysters every two days, over three weeks, to see how quickly the toxins are flushed,” says James Calvert. The testing will begin as soon as oysters are affected by the next bloom of A. catenella. He says this could be at the company’s Blackmans Bay lease, which has been closed for up to 11 weeks in previous years as a result of toxic algal blooms. “If a bloom occurs somewhere else though, we’re happy to travel to collect those oysters for the trial,” he says.

Experiments involving Blacklip Abalone identified that A. catenella toxins are accumulated directly from exposure to toxic algae as well as from consumption of toxic feed, and that the toxins accumulate at higher levels in the abalone foot than the viscera.

This finding is the reverse of how abalone accumulates toxins from the less toxic algae Gymnodinium catenatum, also found in southern Tasmania.

“Knowing this means that when sampling for A. catenella toxins, it could be possible to sample only the foot, rather than the foot and the viscera, which will halve the testing and the costs involved,” says Alison Turnbull. “At $500 per test, that’s a significant saving for industry.

“We’ve also identified that processing may be an option, as this involves the scrubbing of the abalone foot, which effectively removes the accumulated toxins in the epipodium tissue on the surface of the foot. It’s not the industry’s preferred option, but it is an option,” she says.

The research finding that toxins accumulate from both feed and direct exposure to toxic algae makes it a potential risk for wild-harvested abalone, abalone aquaculture and live abalone holding facilities that draw water from coastal areas during bloom periods. 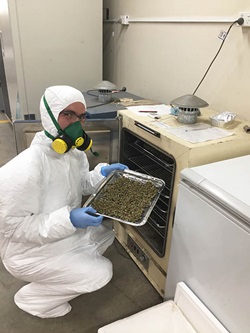 Work is now underway at SARDI to use the toxin-contaminated tissues to validate the Neogen rapid test kit as an indicator test for abalone.

Chief executive of the Abalone Council Australia Ltd, Dean Lisson, says understanding how abalone accumulates and depurates the A. catenella toxins – and the different chemical components that make up the toxin – is essential in refining the industry’s risk management plan.

“Having the joint biotoxin facility meant that we could get this work done much more quickly and effectively than trying to do it on our own.

“When there’s a bloom of A. catenella, we need to know when to close fisheries and for how long. The laboratory experiments have looked at the uptake of the toxins in abalone. Now we are doing further testing of animals from the wild, looking at how long the abalone take to depurate the toxins so that they are safe for human consumption,” he says.

Alison Turnbull says the joint approach to the research has provided a successful model that has allowed different industry participants to address a shared concern and will support risk management for the seafood sector nationally.

“Changing ocean currents and environmental conditions, particularly associated with climate change, and transport of algal cysts via ships’ ballast waters means that no state is immune to future blooms,” she says.

“The knowledge gained can be applied to contingency planning in other states, and the rapid screening processes verified as part of this project, or in related research, are providing effective tools to demonstrate ‘free from’ status, to underpin confidence in the safety of our seafood and retain access to markets.