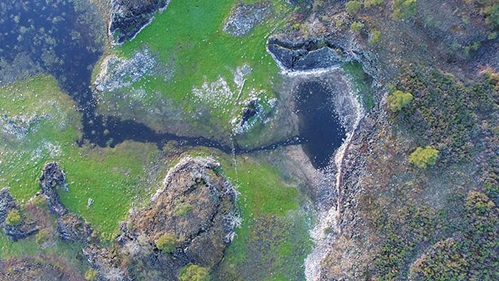 Amillennia-old aquaculture system set within volcanic lava flows and marshes in Victoria’s south-west has joined the Great Barrier Reef, Kakadu National Park and the Sydney Opera House on UNESCO’s World Heritage List of sites of significance to all humanity.

Unlike previous Australian listings, however, the Budj Bim aquaculture network is the first to be recognised exclusively for its Aboriginal cultural values.

Created by the Gunditjmara people, the system uses weirs, dams and stone channels – some hundreds of metres long and dug out of basalt lava flow – to divert water, kooyang (Southern Shortfin Eel, Anguilla australis) and other fish to holding ponds and wetlands.

The sophisticated engineering means eels and other fish can be ranched and then harvested year-round using woven baskets set as fish traps in gaps in the weirs. Traditionally, excess eels were smoked and traded. 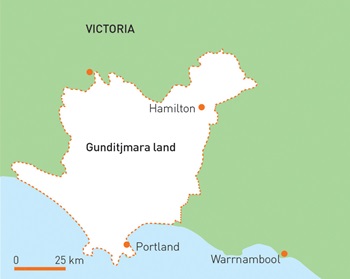 The success of the aquaculture system allowed for permanent settlement, confirmed by the remains of more than 300 round, basalt stone houses also found at the Budj Bim site.

Carbon dating found the settlement and aquaculture enterprise date back an astonishing 6600 years, making it one of the oldest and most extensive aquaculture systems in the world.

The settlement sits within a remarkable landscape that also includes the Budj Bim volcano (Mount Eccles) in the Budj Bim National Park and water flow from Tae Rak (Lake Condah), which are located about 75 kilometres north-west of Port Fairy in Victoria.

Traditional owners of Gunditjmara country were present in Baku, Azerbaijan, when UNESCO made the announcement, adding the Budj Bim Cultural Landscape to the World Heritage List on
6 July this year.

Gunditjmara Elder Denise Lovett said the announcement was a special day in the decades-long quest for recognition.

“This landscape, which we have cared for over thousands of years, is so important to Gunditjmara People,” she said. “The decision also recognises Budj Bim’s significance to all of humanity. We are so proud to now be able to share our achievements and story with the world.”

The FRDC embraces both aquaculture and Indigenous fisheries in its research portfolios and has welcomed the UNESCO announcement.

“This is the first listing for an Indigenous cultural site in Australia and with it comes the precedent-setting recognition of Indigenous connection between land and sustainable land use in the creation of the world’s oldest continuous culture,” he says.

However, he sees many sites across Australia where the observational science of Indigenous fisheries has achieved truly impressive abilities to work with nature to maintain balance over millennia.

In the notion of taking only what you need – and preserving what is needed for the future – he sees a principle that is also at the forefront of the FRDC’s goals.

“While I celebrate for the Gunditjmara People, I also recognise the significance of Budj Bim in highlighting the need to protect many more Indigenous cultural sites across Australia, especially those related to sea and freshwater country.”

The Victorian State Government has invested $13 million to protect the area and develop a world-class tourism destination, with the investment including support for self-determination for the Gunditjmara People via the Gunditj Mirring Traditional Owners Aboriginal Corporation (GMTOAC).