There is a heightened awareness of biosecurity issues in the aquaculture sector, but more information about relevant diseases and reporting channels could accelerate responses to potential threats 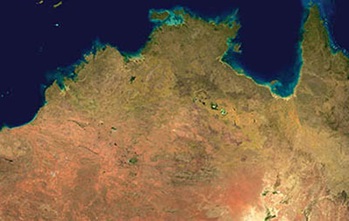 A survey of aquaculture and community stakeholders in northern Australia has identified that two-thirds of aquaculture operators fear a biosecurity outbreak is imminent, and likely to occur within the next 12 months.

More than 70 per cent of operators also believe the Australian Government isn’t tough enough on the biosecurity and quarantine for imported seafood, a view also shared by 50 per cent of other fisheries stakeholders who took part in the recent survey.

The survey was commissioned by Animal Health Australia (AHA) and coordinated by Helen Jenkins, aquatic biosecurity liaison officer for northern Australia. She says the aim of the survey was to identify what aquaculture operators in the north require to improve biosecurity – what the attitudes and barriers were and what AHA could do to address those.

The survey targeted perspectives from both the aquaculture sector and the broader community and was undertaken by the independent research agency Instinct and Reason. In all, there were 103 responses: 39 from aquaculture operations and 64 from non-aquaculture stakeholders.

The survey found that there has been an increasing awareness of biosecurity issues in the aquaculture sector over the past three years, following increased training and major disease outbreaks such as white spot disease. The increased awareness also suggested a positive impact from a biosecurity awareness roadshow conducted in 2018 across northern Australia.

Seventy-nine per cent of operators surveyed said they had a biosecurity plan in place and that it was reviewed at least once a year. Passive surveillance of farmed animals is the most common biosecurity practice, with 75 per cent of farms visually checking stocks at least daily, usually during feeding, conducting mortality checks or water quality testing. Mortality rates are considered the most important trigger for an investigation.

Most farms rely on their own experience when deciding how to act (67 per cent). Just over one-third (36 per cent) contact a laboratory for tests or a health consultant (31 per cent), and 31 per cent check water quality.

However, just over one-quarter (28 per cent) could not cite a notifiable disease in their industry. For those who could, 78  per cent would immediately notify the relevant state or territory department.

Helen Jenkins says the survey identified a number of initiatives that could help increase awareness and reporting of biosecurity issues.

While most operators surveyed (79 per cent) indicated they had biosecurity plans, there was strong interest in the provision of generic biosecurity plans and guidelines, as well as assistance to tailor generic plans for individual business, identify risks and review existing plans.

Helen Jenkins says promoting emergency contacts could be valuable for both the aquaculture industry and broader community, as the reporting of aquatic biosecurity incidents is not necessarily a straightforward process. There are different reporting protocols depending on the type of incident – a fish kill, pest or disease  – and the fisheries jurisdiction where the incident occurs. 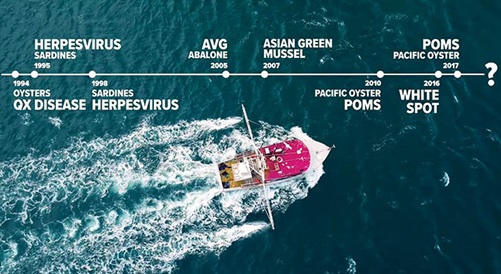 In 2018 the FRDC funded the Queensland Seafood Industry Association to develop three short videos highlighting the importance of aquatic biosecurity for wild fisheries and the significant role of the sector in identifying and reporting potential biosecurity threats.

While national border security is the responsibility of the Australian Government, once a threat has breached the border, biosecurity becomes a responsibility shared by all industry and community members.

The videos highlight the consequences of biosecurity outbreaks, such as the recent outbreak of white spot disease, which affected both prawn farmers and fishers wild-harvesting prawns and other crustaceans. Stock on affected farms in south-east Queensland were killed, with quarantines put in place for locally wild-harvested crustaceans, including prawns. The videos show the important role that wild-harvest fishers and those in the post-harvest sector can play in terms of surveillance. Being out on the water, and constantly handling seafood, people working in the industry are well placed to identify any pests or diseases.

Early detection and notification of biosecurity risks is crucial to initiating the most effective response. If you identify something unusual such as an aquatic pest or disease:

Notify your local biosecurity agency, or call the National Disease Watch hotline: 1800 675 888. Call the national hotline if you suspect a connection with any of the Reportable Diseases of Aquatic Animals.

Reporting in the north

To help aquaculture farmers develop and implement biosecurity plans for their operations, the Department of Agriculture and Water Resources also recently completed a national biosecurity survey involving 122 farm owners and managers from a diverse range of enterprises.

The survey was completed in late 2018, by the independent research company Instinct and Reason, with funding provided by the department, through the FRDC.

The survey was divided into six sections:

Results indicated that all eight sectors wanted help to develop and carry out on-farm biosecurity plans. The types of assistance sought varied according to the individual farms and sectors, however, a number of common key activities and measures for assistance were identified.

Farmers indicated they would like help with writing, improving and reviewing on-farm biosecurity plans specific to their property or business, as well as biosecurity training workshops tailored to their specific sector. Sampling kits and the development of further nationally consistent sector or system-specific biosecurity plan guidelines were also recommended.

Easy-to-read marketing and communication materials detailing sector-specific diseases and government contacts was a further recommendation. The survey showed the majority of farmers would contact the state or territory government if they suspected a notifiable disease on their farm, but the contact information needs to be more readily available.

Funding has been committed to complete follow-up activities for this project, such as developing the sector-specific workshops, support materials and resources.