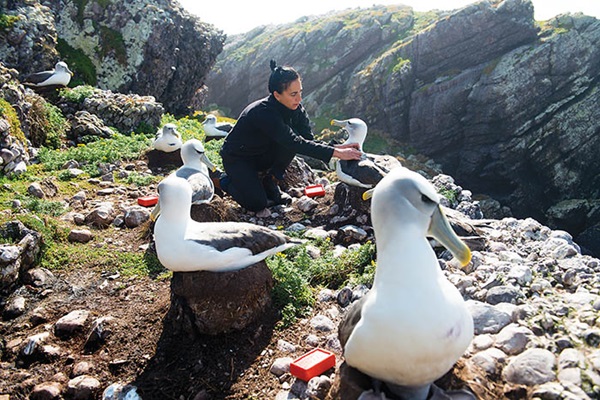 Albatross are the endurance athletes of the bird world. They may be found fishing along windswept coastlines, cruising the remotest of seas or rearing their young on inhospitable rocky outcrops battered by the elements.

For birds with such tenacious lifestyles, it seems incongruous that many of the world’s albatross species are also identified as at risk. Australia’s own shy albatross is listed as ‘vulnerable’ under Australia’s Environment Protection and Conservation Act 1999 and as ‘near threatened’ by the International Union for Conservation of Nature.

This endemic species breeds only on three tiny islands off the coast of Tasmania – Albatross Island in the north-west, and Pedra Branca and Mewstone off the state’s southern coast – with a total of just 15,350 breeding pairs. Over the last century or so, these populations have faced multiple challenges from humans, such as exploitation for eggs and feathers.

Fishers in Australia’s southern waters have introduced bird deterrent devices on vessels, reducing dangerous interactions with trawl gear by 96 per cent in recent years. Despite this, interactions with seabirds, and particularly with shy albatross, are a continuing problem.

A recently completed FRDC project has used DNA collected from shy albatross scat to identify what the birds eat, which in turn is helping to identify the most likely locations for potential interactions with the birds, and possible competition with fishers for food.

In Tasmania, the state’s Marine Conservation Program includes a shy albatross research program, which has been running since the 1980s, through the Department of Primary Industries Parks Water and Environment (DPIPWE). 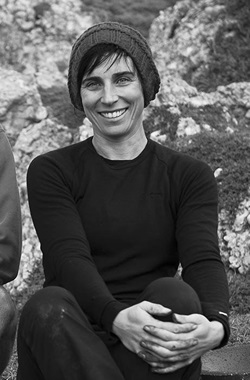 Four times a year, a team of researchers visits Albatross Island, in Bass Strait, to collect data from nesting birds, chicks and the young juveniles who have not yet fledged. They measure eggs, check identification bands and record a variety of indicators to create a snapshot of the health of the population.

The data is also compared to long-term trends.

However, as the shy albatross spends much of its life on the wing, foraging at sea, there is only so much that can be learned by studying breeding populations.

It is a large bird with energy-intensive needs that consumes large amounts of fish and other marine organisms. Time spent foraging at sea can bring birds into contact with fishing vessels, as they are attracted to the presence of fish and discarded offal from vessels. This puts them in danger of striking or becoming entangled in fishing gear.

To find out what is happening to the birds at sea, researchers tag individual birds and track their movements using satellite technology.

The recent FRDC project has added to the researchers’ arsenal, validating a DNA-based technique that has shed light on what the birds eat when they are away from their islands, and the potential source of this food.

Rachael Alderman is the team leader of the DPIPWE Marine Conservation Program and has spent 15 years monitoring the shy albatross population that nests on Albatross Island.

“This project aims to better understand the risk of engagement with fisheries, the nature of these engagements, and to what extent external factors might be changing the albatross’ diets,” she says.

It is 20 years since research last focused on the diet of shy albatross. Historically, researchers had no other option but to induce the birds to vomit up the contents of their stomachs to investigate what they had eaten. This method was problematic ethically, and data tended to be biased because some food, such as squid beaks, takes longer to digest and shows up more frequently in the data than softer bodied organisms, which are digested far more rapidly. 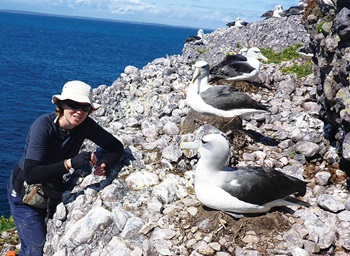 Julie McInnes, a researcher who works with the DPIPWE Marine Conservation Program, says that DNA analysis of scats has been in use in ecological research programs around the world for more than a decade. But it is only recently that improvements have made the technique both affordable and available on a scale large enough to generate suitable datasets for the albatross research.

She says using this process on shy albatross for the first time has involved a lot of groundwork to establish the right parameters to ensure success.

“We had to work out when is the best time to collect the scats, and how fresh they should be so that the DNA we are interested in is extractable or visible to us when we analyse it. Then we can focus on the diet DNA but not the other stuff that might exist in the scat,” she says.

The scats are collected opportunistically across the entire colony ‘as they happen’, while researchers are checking nests for eggs or recording a bird’s identification bands and age, and analysed at a population level. Working in collaboration with the Australian Antarctic Division, researchers extract the DNA from the scat in the lab before analysing it to see what species the birds have eaten and what the proportion of each species is in the diet.

The challenge is to detect only DNA in the scat that has come from a bird’s recent meals. This means separating out the diet DNA from the bird’s own DNA, that of any internal parasites, or anything from the soil on which the scat was deposited.

As part of the project, the research team has compiled a large database of DNA from different fish species in southern Australia that might form part of the albatross diet. Correct identification of a strand of DNA requires a database of DNA against which to match the DNA found in the scat samples.

The database was compiled from three sources: the open access GenBank (an annotated collection of gene sequences freely available), CSIRO’s Australian National Fish Collection, and samples provided by trawl fishers and fisheries observers working with the South East Trawl Fishing Industry Association (SETFIA). New DNA sequences generated during this project have been uploaded to the GenBank database, making them available to researchers around the world.

In order to identify the strand of DNA, scat samples are analysed using different markers. “There are different gene regions that can be used depending on what the DNA you have is like,” Julie McInnes says. “For example there is a gene region that is regularly used for fish identification using flesh samples, but because of the degraded nature of the DNA found in albatross scats we often need to design shorter markers to detect the DNA found in the scats.”

The process starts by using a general identifier or marker that will broadly distinguish all food groups. For instance, analysis might start with using a ‘universal marker’ for the presence of fish, squid and crustaceans.

A second marker is then used to identify all the fish DNA found in the scat, which can be matched to the database to identify individual fish species.

The project analysed 1655 scat samples collected between March 2013 and March 2018. The analysis identified the DNA of 84 different fish species and 11 cephalopods, as well as salps and krill.

Once researchers had analysed the birds’ droppings, they compared what they discovered about the diet of shy albatross with other data, such as the annual occurrence of different fish species in different geographical locations, and satellite tracking data showing the movements of the albatross during the last 20 years.

For the project team, the analysis provides a wealth of insight into the albatross diet at different stages of their breeding cycles.

“We found there is not much difference in the diet between years, but what we find between the different periods of the year varies,” Julie McInnes says.

“I’ve been quite impressed with the high prevalence of Giant Cuttlefish found in the diet during the period when the shy albatross are incubating their eggs. It raises the question of whether that behaviour is opportunistic – because that is when the Giant Cuttlefish are available – or whether there is some other reason such as nutritional requirements of the birds at that time.”

Rachael Alderman says the findings will allow researchers to see if the diet is changing over time and why that might be. “We can learn from what they are eating, whether the nutritional requirements of the food selected and overall energy expenditure varies between breeding stages, and the extent that humans are in competition with albatross for fish.” 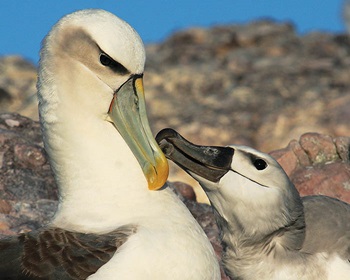 A large chick almost ready to fledge in April, begging for food from its parent.
Photo: DPIPWE

The new information about what albatross were eating, when and from where, was overlaid with Commonwealth fishery data using times, locations and species caught by vessels to give an indication of when bird and vessel activity overlaps both spatially and through the species targeted.

The project found that the majority of the shy albatross food is being sourced naturally by the birds, rather than from fishing vessels. The researchers drew this conclusion in instances where the fish or cephalopod identified was both naturally accessible to shy albatross and not caught by a fishery in the area.

Overall, 83 per cent of shy albatross from Albatross Island consumed natural prey. However, the analysis found that 13 per cent of birds consumed species that were likely to have been sourced from fishery discards. This level of engagement varied between years and between breeding stages, ranging from three to 29 per cent of birds sampled, but researchers are not yet sure what is driving these variations.

Blue Grenadier, ling and warehou are the three species shy albatross are most likely to have sourced from fishing vessels. Of the 84 fish species identified in the albatross’ diet, only eight species have been identified as being targeted by both shy albatross and fishing vessels in south-east Australia. However, these eight species made up more than half of the diet, predominantly Gould’s Squid, Redbait and Jack Mackerel.

The project found that shy albatross overlap spatially, to some extent, with six different Commonwealth fisheries, but overlaps occur regularly with only three. These are the Southern Squid Jig Fishery, during March when chicks are being reared; the scallop fishery, at all stages except chick rearing; and the Southern and Eastern Scalefish and Shark Fishery (SESSF) throughout the year.

Gear types used by the SESSF in areas where birds and vessels overlapped were most commonly bottom otter trawl gear and Danish seine. These overlaps do not necessarily correspond to an interaction between birds and fishing gear, just an increased potential for interaction.

The project has worked with SETFIA, seeking out fishers and fishery observers to compare this data with observations at sea. Simon Boag, SETFIA’s executive officer, says the project has been a great example of cooperation between industry and researchers working towards the conservation of a species.

“Our members have reduced interactions with seabirds by more than 90 per cent. By identifying the remaining risks we have more chance of taking further action that allows our members to continue to supply Australians with local seafood without doing harm to shy albatross populations,” he says.

Rachael Alderman says that one of the key aims of the project is to make this information available for the fishing industry and other researchers, to provide a baseline on what the albatross eat and any associated risks they may face from different food sources.

Future research will focus on understanding more about the impact of climate variability on foraging and breeding success, as well as the changes happening on Albatross Island – such as the effect of warmer temperatures. This project was part of a series of projects coordinated by DPIPWE, addressing how best to advise decision makers on conservation and management issues, directly related to the National recovery plan for threatened albatrosses and giant petrels 2011-2016.