Lessons from across the seas

Cultural pride, leadership and collaboration were highlights of an Australian delegation’s trip to learn more about Māori involvement in New Zealand fisheries 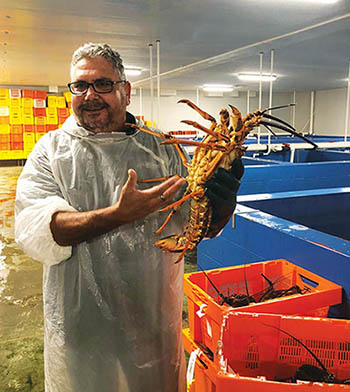 Learning how to harness both economic benefits and cultural wellbeing for Indigenous Australians through involvement in seafood provided the drive for a recent trip to New Zealand by members of the FRDC’s Indigenous Reference Group (IRG) and the Indigenous Land and Sea Corporation (ILSC).

The Australians were guests at the 2019 Māori Fisheries Conference, where they presented and were later honoured to be the first ever non-members to attend the annual general meeting – a collective of Māori fishing groups.

The purpose of the trip was to develop stronger relationships between New Zealand and Australian First Nations peoples, in order to share knowledge and experience related to operating in fisheries and aquaculture. The Australian delegation returned home buoyed by the experience and confident about the promise for Indigenous Australians in Australia’s seafood industry.

“It was empowering to see how strong a voice the Māori people have in the New Zealand fishing industry, being involved at all levels, from fishers and workers right up to CEOs and board members or chairs,” says Ashley Perez from Northern Territories Fisheries.

Chris Calogeras says the trip provided insight into the strategies and policies that have either hindered or assisted the economic and cultural development of First Nations peoples in New Zealand, and how these learnings can assist in Australia.

Now in its eighth consecutive year, the Māori Fisheries Conference was this year held in Auckland in March, with more than 300 people attending. The theme of the 2019 conference was ‘Te hā o Tangaroa kia ora ai tāua’ – ‘the breath of Tangaroa sustains us’. Tangaroa means ‘God of the Sea’, and the theme spoke to the interconnectedness of humanity with the environment, underpinning the purpose of the Māori Fisheries Trust, Te Ohu Kaimoana, and the work it undertakes to protect Māori fishing rights.

The conference explored topics surrounding humanity’s relationship with Tangaroa – from eco-colonialism and Indigenous resilience, to Māori food gathering and traditional practices – and examined how businesses can preserve culture in commercial practices.

Though unable to understand the language, the Australians were impressed by the power of a presentation by Danny Poihipi, speaking in Māori, on Māori food gathering and traditional practices. Educated in the art of gathering food since he was a child, Danny Poihipi is skilled in the arts of net making and seafood processing. He works presenting this knowledge to children in local schools.

The theme of a presentation by Chellie Spiller, of Wayfinding Leadership, was approaching leadership in a culturally grounded way, with an example of leadership development undertaken through a journey on a traditional waka (sailing canoe).

Delahay Miller says he has come back from the trip inspired. “I’m an Aboriginal man, and going to the conference – the most powerful people in the room were First Nations people. It was great to see,” he says. “It empowered me to want to develop as a leader.”

Members of the IRG delivered a presentation on Indigenous fisheries in Australia, with Matt Osborne presenting on the IRG’s Indigenous fisheries research advisory role for the FRDC. Shane Holland gave an overview of native title and access to aquatic resources for Indigenous Australians and Chels Marshall spoke about some of the key research projects that have been funded, such as the identification of values placed on fishing by Indigenous Australians. Their combined presentations ‘What’s happening in Australian fisheries’ can be viewed here.

Conference presentations also demonstrated the increasing level of concern about the impact of climate change on aquatic resourcesin New Zealand, and for the Māori community. In a presentation regarding eco-colonialism and Indigenous resilience, Tina Ngata advocated for the protection of Indigenous rights, but also spoke about science working towards effective environmental stewardship along with traditional peoples.

“This really resonated with me and with my work at the Australian Institute of Marine Sciences (AIMS),” Traceylee Forester says. “I work with AIMS scientists and Traditional Owners of sea country to build partnerships that connect Western science and traditional knowledge. So both Tina and I are working to bridge the divide.”

Another presentation of note was from Rachel Taulelei, named the 2018 Māori Business Leader, who is CEO of family-owned Māori food and beverage producer Kono.

Traceylee Forester says Rachel Taulelei talked about combining Māori lore and law, trying to make a commercial enterprise work with traditional lore as a fundamental basis for the business. “It was about preserving Māori culture in a modern society and thinking that this isn’t a choice but a must. Again this really affected me, as my own people are thinking along this line.”

Traceylee Forester hopes that this will be the first of many opportunities for the First Nations peoples of Australia and New Zealand to learn from one another.

“In terms of moving forward into the future, both the Māori peoples, the Aboriginal peoples and the Torres Strait Islanders have a lot of experience and knowledge that can be shared between the three groups – there should be more opportunities for us to ‘talk’ with one another,” she says. 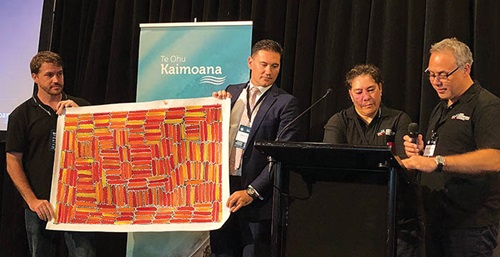 Following the conference, the Australian delegation attended the annual general meeting of Te Ohu Kaimoana. This organisation, which hosted the Māori Fisheries Conference, operates as a Māori fisheries peak body to the New Zealand Government, negotiating policy to advance Māori interests in the marine environment, including fishing rights. It was the first time non-iwi (Māori clan) representatives have ever been allowed to attend this meeting, and the FRDC’s Josh Fielding says the experience was incredibly valuable for the group. “It gave great insights into the organisation and management of fishing rights that the Māori have in order to realise the benefits.”

The following day, on a processing tour of the Port Nicholson Fisheries lobster plant in Auckland, the group also had the opportunity to spend time with Maru Samuals, general manager of the Iwi Collective Partnership, an entity that organises and manages commercial fishing quota on behalf of 14 iwi.

Maru Samuals emphasised how the partnership approach – working together as a collective – has been the hardest component of the journey for Māori people in gaining and accessing their fishing rights. While they are making gains, he said this component remains the hardest part on an ongoing basis.

Shane Holland, Traditional Fisheries Manager at PIRSA and an IRG member, says that the trip has really impressed upon him the need for unity. “I can see a future where Australia will get to where New Zealand is, but we have a way to go,” he says.

“The conference really emphasised the strength of working together and that, although it can be slow, it is far more substantive than moving forward in isolation,” he says.