Senator Bridget McKenzie has been appointed as Minister for Agriculture in the new Australian Government, and is the first woman to serve in this role. Senator McKenzie was first elected to Senate in Victoria in 2010, and is deputy leader of the National Party.

Senator Jonathon Duniam has been appointed as Assistant Minister for Forestry and Fisheries. Senator Duniam was first elected to the Senate in Tasmania in 2016, representing the Liberal Party.

They replace the former Minister for Agriculture David Littleproud and Assistant Minister for Fisheries and Forestry Senator Richard Colbeck. 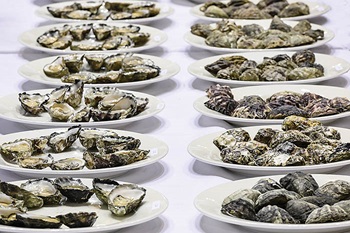 It won the inaugural president’s medal in 2006 and was a finalist for the 2019 president’s medal, which is judged across all fine food categories (and was won by Meredith Dairy with a marinated feta).

Established in 2001, the Sydney Royal Aquaculture Competition judges the best of the best in aquaculture. This year the competition focused on supporting the growth of Australian prawns and oysters.

Australia’s seafood sector is set to benefit from the creation of a new Blue Economy Cooperative Research Centre (CRC) announced in April.

The Australian Government announced $70 million funding for the CRC, which will be based at the University of Tasmania in Launceston.

It is expected to help realise the aims of the National Aquaculture Strategy to double the value of this sector to $2 billion per year by 2027.

The CRC will focus on five key areas of research: offshore engineering and technology, seafood and marine products, offshore renewable energy systems, the environment and ecosystems, and sustainable offshore developments.

The CRC has national and international partners, which will provide over $258 million in financial and in-kind contributions to add to the $70 million grant, which will be paid over 10 years.

Research-based information about the best fish handling practices has been added to the FRDC’s Recfishing Research subprogram website.

The information added includes the best techniques to aid the recovery and survival of a fish after its release, including what to do to prevent barotrauma in fish caught in deep water.

The collection of fish-handling practices is based on FRDC projects and other research, and a number of these information resources are available on the site. Further updates to the website will be made in response to requests from stakeholders.

The Australian Maritime Safety Authority (AMSA) is holding a series of workshops for owners and operators of domestic commercial vessels who have an existing safety management system (SMS) in place and want to improve and build on their current system.

The workshops will focus on applying a practical SMS, as well as building on an existing system so that it continues to keep vessels, crew and the environment safe.

Participants will learn the simple principles for an effective SMS, safety requirements under national law and tips on how to review, revise and continue to improve an SMS. They will also have an opportunity to discuss and ask questions about their own SMS with an AMSA representative. Workshops will commence from July 2019.