Future at your fingertips 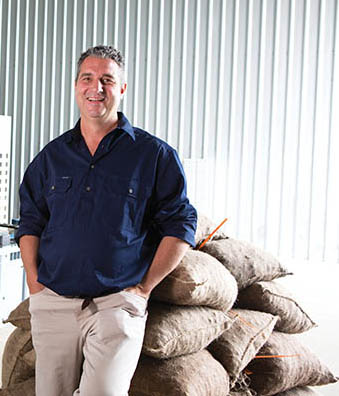 South Australian Pipi fisher Tom Robinson almost self-sabotaged his Nuffield Scholarship application at the last minute, concerned that, on the eve of his 50th birthday, he was too old for the program that generally accepts candidates younger than 45.

As “quite a reclusive person”, he also thought the program, which takes people from primary industries to travel around the world in groups – each investigating the topic of his or her choice – might be a bridge too far for him.

But he says the communal element of the program was one of the highlights. “Going to sleep in double beds with hairy Irish dairy farmers took me completely out of my comfort zone, but the whole thing was a really great experience,” he says.

Strange bedfellows aside, Tom Robinson says travelling with a group provided an insight into the commonalities across different agricultural industries. And this helped to crystallise his ideas around his research topic – how the collection of digital data can empower fishers and enhance fishery management by improving productivity and sustainability to provide a competitive edge.

“Data is going to be so important to how all agriculture will run in the future,” he says. “It was fantastic to learn from people who came from a completely different background, but had the same desire to think differently about their business.”

Tom Robinson already had a vested interest in digital data, having developed the Deckhand app, used by South Australian Pipi and Southern Rock Lobster fishers. It is also about to be rolled out across every fishing sector in New Zealand as part of the country’s move to the electronic reporting of commercial fishing.

The Nuffield Scholarship, he thought, would provide some insight into improving the offering. However, it has ended up doing much more, helping him develop ideas that could transform the collection of fisheries data around Australia.

Deckhand provides a ‘proof of concept’ that fisheries data can be collected in a consistent format and stored safely, but further than that Tom Robinson now envisages the creation of a national databank of fisheries data.

This would become a central repository of digital data, recorded to a common standard and administered by an industry board comprising commercial and recreational fishers, scientists and legal experts with the interests of fishers at heart. Recreational fishers could also report their catch data into the system, he says, enhancing the scope of the information and ultimately improving fishery management.

Technologically, he says, the solution is simple. Multiple examples of the software required already exist, and a data ‘warehouse’ could be established quickly and inexpensively. The difficult part, he says, is getting people across Australia’s multiple jurisdictions and fisheries, who currently collect and store data in different ways, to commit to a common standard and system.

A bank of recreational and commercial data is a powerful tool for the fisheries sector moving forward and not just for improved, nationally consistent fishery management, Tom Robinson says.

Knowledge is power, and with more information about their resource, fishers themselves will be able to take greater control of their businesses and destinies in the broader community and international marketplace.

For example, he says, reliable data is important when it comes to countering scare campaigns and maintaining a social licence to operate. “Industry needs to do a much better job about telling its side of the story, and it can’t do that without the facts illustrated by data,” he says.

Nationally consistent, secure, fine-scale data is also of significant benefit to Australian producers in proving provenance in a crowded international market, Tom Robinson says. “As a producer, I need to tell a story about my Pipis – that they come from clean, cold water and are approved by the Marine Stewardship Council – because I compete against clams grown in Asia [and sold wholesale] for less than $2 a kilo. So unless I can validate my story I’m in a commodity market, not a premium food market,” he says.

And Tom Robinson is not alone in this belief. The Nuffield Scholarship, he says, showed him there was a common agreement across agricultural industries about the need for improved, consistent, trusted data to maximise productivity and build social licence and market advantage.

But it also revealed common hurdles among producers to achieving such a goal. Whether they be dairy farmers using robots to milk cows or broadacre grain growers riding computerised tractors, they were all wary of where their data would be stored and how it could be accessed and used, particularly if it was for purposes for which it was not originally provided.

“Farmers feel like this technology means there are people looking over their shoulder and collecting data about their enterprises that they may not necessarily want to share,” he says.

For fishers, whose catch data is their commercial intellectual property and who “are obviously very sensitive about where that data goes and who uses it and for what purposes”, it’s a concern keenly felt, he says. But Deckhand and his Nuffield experience have shown there are ways to address these concerns both through technological and legal means.

Vision for the future 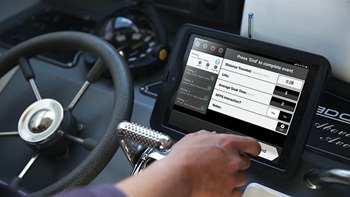 With the data system Tom Robinson has in mind, fishers could record and upload all the information they need to monitor and improve their own businesses and then, with their permission, provide data more broadly for the collective benefit of the industry.

“Fishers need to meet their regulatory requirements but there’s a lot of data that fishers collect that isn’t regulatory. It’s not what the regulator requires but it is helpful to other aspects of their business – around social licence, the environment, sustainability and provenance – and all these things are important to building successful fisheries and maximising the returns from these fisheries,” he says.

Regulatory data would be recorded and provided to authorities as required, but fine-scale data – fishers’ own intellectual property – could also be stored safely to be used as they wish.

“So we need to encourage fishers to recognise how valuable this fine-scale data is … and a key learning for me is we need to stop thinking about data being just a regulatory requirement, [but] as being something critical to the future of the way fisheries are managed moving forward.”

A national approach is required to bring such a concept to life, and Tom Robinson has been consulting with the peak body Seafood Industry Australia as well as attending recent FRDC-funded data workshops to begin to find a solution.

Fishers store and collect data individually in different ways, which makes it difficult to use it to assist discussions about the health of the resource or social licence issues, or provenance.

“Having silos of data is really working against the industry being able to manage itself into the future,” he says. “It needs industry and stakeholders to work in a collaborative way, where the majority sign off and say ‘yes, this is the pathway we want to go down’,” he says. “It’s sort of a ‘build it and they will come’ approach.”

The window for such a national digital approach is open now, he says, because many people are still reporting via paper, and reporting systems and protocols around data collection are inconsistent across jurisdictions and fisheries.

Tom Robinson will present his findings in a paper at the 2019 Nuffield Australia conference in Brisbane in September. He says he would like his work to have an enduring, positive impact. “If we can get industry to see the value of collecting its own data and storing it, that would be a good legacy to leave behind,” he says.

Tom Robinson’s Nuffield Scholarship was sponsored by the FRDC.

Applications for the 2020 Nuffield Scholarship program close on 14 June 2019.