By Gio Braidotti and Catherine Norwood

Aquaculture is the beneficiary of the three most recent research projects to win the FRDC-sponsored Science and Innovation Awards for Young People in Agriculture, Fisheries and Forestry.

The awards are presented at the Australian Bureau of Agricultural and Resource Economics and Sciences (ABARES) annual Outlook conference each March. The research awarded featured the microbiome of oysters, high-value nutritional supplements from algae, and systems to concentrate oxygen in aquaculture ponds.

Combining marine biology and food production, marine biologist Elliot Scanes won this year’s Science and Innovation Awards sponsored by the FRDC. He plans to investigate the microbiome of oysters, an area of research he says has the potential to improve oyster resilience in the face of disease and climate challenges.

The first step will be to assess what organisms make up the microbiota inside oysters, a process made possible by new technology and techniques. He says all animals, be they oysters or people, have microorganisms – bacteria, viruses, fungi and other single-celled animals – that live within them.

“These microorganisms are really important to our health and wellbeing, but we’re really only just discovering how important they can be.” He will then look at how climate change, especially the warming of the oceans, might affect the microbiota inside oysters.

The second part of the research will be to identify whether existing techniques, such as selective breeding, can be used to improve that microbiota.

Elliot Scanes says the immune systems of oysters might not be as strong as that of mammals. This, combined with their exposure to changing environments, leaves them vulnerable to diseases and other pathogens.

“Microorganisms associated with oysters are really important in helping them fight disease, and also to be healthy in general,” he says. “We know that diseases are one of the biggest issues with oyster growing. If we can wind that back a little bit, it’ll be really rewarding to know that we actually helped the industry that way.”

Elliot Scanes is based at the University of Sydney and will partner with the NSW Department of Primary Industries on the research. 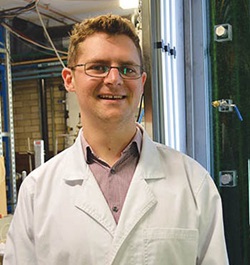 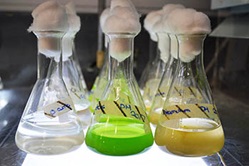 The 2018 award winner, Dale McClure, is part of a University of Sydney initiative, the Centre for Excellence in Advanced Food Enginomics.

He targeted aquaculture wastewater for the production of high-value nutritional supplements for both animals and humans. To date, processes have been developed to produce four high-value nutrients:

The biological ‘engines’ making these compounds are carefully selected microalgae species: single-celled, water-living organisms that can photosynthesise. Fifteen species with the ability to make the targeted compounds were identified in a CSIRO microalgae library.

“Our research shows that the right microalgae grown under the right conditions can remove fish farm by-products, like nitrogen and phosphates, that have harmful environmental effects, while producing compounds humans obtain from fruit and vegetables,” Dale McClure says. “This allows fish farmers to value-add while doing something good for the environment.”

In 2019, operations using Dale McClure’s research began with Sydney-based industry partner Green Camel at its aquaculture facility where it grows Barramundi. Wastewater from the fish farming is also used to produce organically grown herbs for some of Australia’s largest supermarket chains.

Chitralekha Adhinarayanan, Green Camel’s research and development manager, says the prospect of producing nutrient-rich microalgae in the Barramundi wastewater as part of its production loop is very positive, with potential to use the microalgae as a feed supplement to improve fish growth, as well as treating the water.

“Our intention is to investigate the opportunities of using algae that are rich in omega-3 fatty acids to increase the growth rate of our fish,” she says. “They seem to find it more palatable and put on weight faster, so there is a good business case for us.”

The 2017 winner of the FRDC-sponsored ABARES Award was Kevin Rassool, one of five engineers who established the start-up company FREO2 Aqua in Melbourne. They invented and patented a system to concentrate atmospheric air into medical-grade oxygen using only the power of running water. The design also won the 2017 Eureka Prize for Innovative Use of Technology.

Following initial tank trials in Sydney, Kevin Rassool established a partnership with Huon Aquaculture, which has a FREO2 Aqua system installed at an Atlantic Salmon hatchery in Tasmania. It is powered by water being pumped between grow-out ponds, with the resulting oxygen supplied to a spare pond equipped with a sensor array.

“The system has been operating continuously for three months without interruption, proving it can produce oxygen for aquaculture producers,” Kevin Rassool says.

Benefits include reduced operating costs either by eliminating the need to purchase liquid oxygen or bypassing the need to concentrate oxygen on-site using electricity. As such, the system also reduces greenhouse gases, and improves plant profitability and efficiency. The oxygen improves fish survival rates, growth and feed-conversion ratios, and reduces algal growth.

“The benefits can flow on to rural producers who often face unique challenges associated with delivery and electricity costs, enabling them to intensify operations in areas where it has not before been viable,” Kevin Rassool says.

The robust design features also make the system attractive to small-scale fish farmers in developing countries. Development work on these philanthropic applications is underway with in-country partner AQUADAPT in Thailand. There are also medical devices based on the FREO2 Aqua technology being rolled out in Africa by FREO2 Foundation.

The company’s focus is now on identifying manufacturing partners for the modular design used at the Huon hatchery, while work commences on designing a scaled-up version
of the same system.

Dale McClure is investigating the production of high-value nutrients from algae grown in aquaculture wastewater.

Dale McClure is testing 15 species of algae for their ability to produce nutritional compounds.

Kevin Rassool at the Huon aquaculture facility in Tasmania that is running trials with the FREO2 Aqua system.