Australian households spend an average of $14 a month on seafood to cook at home; there is room for improvement 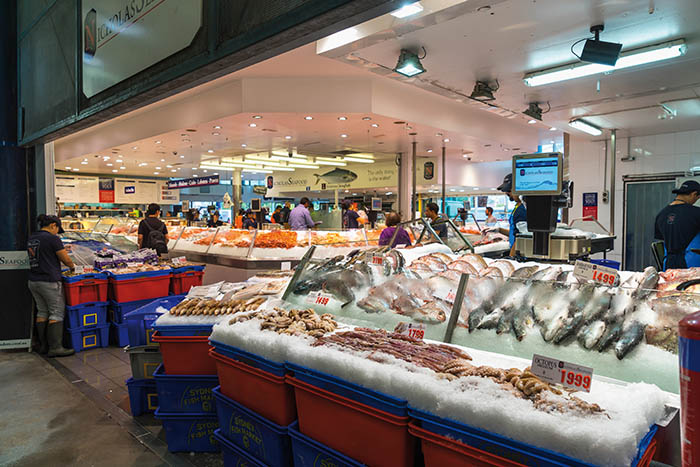 The FRDC has teamed up with international data analytics company Nielsen to provide seafood producers with better understanding of how Australian consumers buy their seafood.

From supermarkets to fishmongers, Nielsen Homescan data captures the grocery purchases of Australians by using a continuous panel of 10,000 households that is geographically and demographically balanced. This information can give seafood producers a better understanding of changes in consumption patterns, while also highlighting future opportunities. 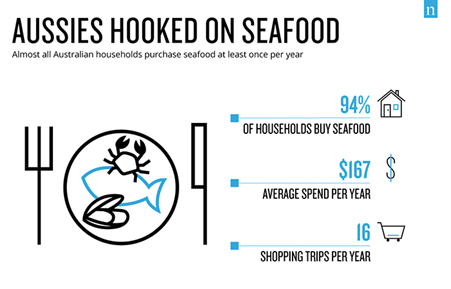 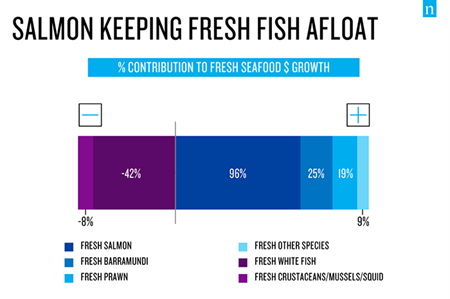 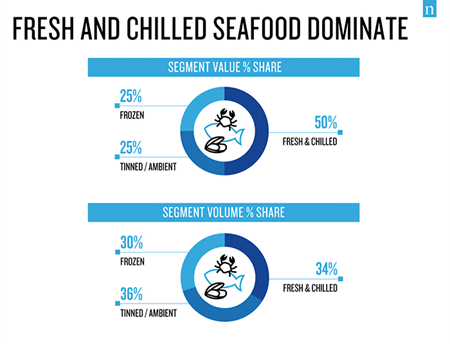 Nielsen Homescan data shows that Australian shoppers are hooked on fish. In the 52 weeks ending 8 September 2018, more than nine in 10 (94 per cent) of Australian households have purchased some type of fish or seafood.

These households spent an average of $167 split across 16 shopping occasions in the past 12 months. Total annual dollar sales for the fish and seafood category grew by 3.6 per cent, largely driven by an increase in the average price per kilogram. In terms of volume, the amount of fresh seafood purchased by consumers in the past year has held steady.

The fish and seafood category has a strong foundation for growth and is well positioned to be a premium protein offer for consumers. The market is split into three distinct segments – fresh, frozen and ambient (tinned or shelf-stable) – and sales performance varies by type. In terms of dollar sales, fresh fish accounted for half of the category in the past year, while frozen and ambient each made up a quarter.

The picture differs in volume terms, with each segment roughly represented by a third of sales. This highlights how important fresh seafood is when it comes to driving up the value of the category overall, although most shoppers buy across all three segments.

Traditionally, fishmongers and markets have been perceived as the stronghold of fresh seafood sales. However, this dynamic is changing. Major supermarkets are driving the growth of fresh fish and seafood, while specialty shops and markets as a retail group are declining. In 2018, 79 per cent of Australians shoppers purchased their fresh fish from the supermarket, compared with 21 per cent who purchased from specialty shops and markets.

Contrary to other proteins such as meat and poultry, frozen fish and seafood is growing faster than both the fresh and ambient segments. Last year, frozen fish grew by 5.3 per cent in dollar sales and 3.3 per cent in volume sales, with some of this increase in volume attributed to shoppers switching from fresh to frozen.

Frozen fish and seafood have a wide range of prepared options and a lower price point that appeals to busy families and also those in a lower-income bracket. Over the past year, the frozen segment was, on average, $10 cheaper per kilogram than fresh fish and seafood. The frozen segment has also had a significant number of new products launched over the past year (particularly in the area of frozen white fish and prawns), contributing more than $10 million to the category.

Ambient category fish – tinned or other shelf-stable varieties – is a consistent performer, featuring in the lunches and dinners of many Australians on a regular basis. Unsurprisingly, most ambient fish is sold through supermarkets, with 90 per cent of the value going through this channel. Salmon, tuna and sardines are the key contributors to growth in this segment. Ambient has the cheapest price per kilo of the segments, which is perhaps one of the reasons why these products have a strong skew towards young, single Australians.

Having the right supply is critical during key seasonal times for seafood producers. While some species, such as Atlantic Salmon, are sold consistently throughout the year, prawns have a seasonal skew with sales peaking at Christmas and Easter.

For many Australians, prawns are viewed as a summer treat and this coincides with a steady increase in sales from September right through to the end of summer. Once the festive season is over and consumers rein in their eating and drinking, the category typically sees a surge in the cheaper ambient and frozen seafood options.

Australia is experiencing a change in the demographic make-up of the population, with an increase in ethnic diversity.

Those with an international heritage are not as fond of Atlantic Salmon as shoppers of Australian heritage, but they do show a marked preference for Barramundi. Fresh fish is also skewed towards couples over 35 who fall into a higher income bracket.

Australians are also showing a much higher engagement with health and wellness trends; fish and seafood are ideally poised to take advantage of these trends. Millennials and high-income households, in particular, have a greater willingness to pay a premium for products that have perceived health benefits or offer superior quality, such as fish and seafood.

Current flat volume trends indicate that fish and seafood sale volumes have not kept up with the Australian Bureau of Statistics’ population growth (1.6 per cent). However, with more than three per cent value growth – driven by the slightly higher cost of fish – Australians are certainly not pulling back on buying fish.

There is room for future growth, particularly if seafood producers are willing to:

Capitalising on the growth of frozen fish and seafood, the popularity of prawns, convenience and seasonality, By George Raw Prawn Tail Off (500 grams) has been a stand-out new product launch.