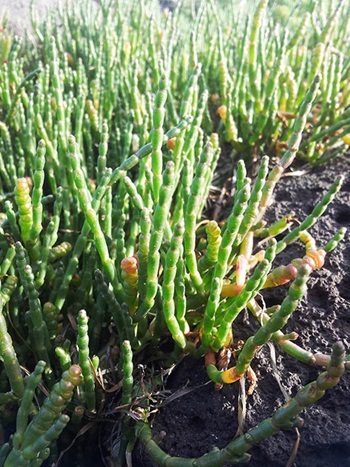 ‘Beaded glasswort’ is one of several common names applied to samphire, which is expected to be included in the proposed Australian Aquatic Plant Names Standards.
Photo: Chris Rockley

Sea asparagus, swamp grass, glasswort, pickleweed and sea beans – these are all common names for an aquatic form of the succulent family known more formally as samphire (Amaranthaceae sp.).

Often found inland on salty flats as well as in coastal areas, samphires are a form of ‘sea green’ gaining  popularity among boutique chefs around the globe.

But there are many different species of samphire, including several native to Australia, some of which are endangered. Confusion over naming and identification is rife.

The proposed Australian Aquatic Plant Names Standard will address this confusion, distinguishing different species by matching scientific names with a single agreed-upon common name, much as the Australian Fish Names Standard has done for marine animals.

Edible algae, microalgae and samphire will be among the first entries. At a workshop in Hobart in October 2018 experts defined what was an aquatic plant and established candidate names for an initial list of 50 plants.

About 250 species proposed were rejected as not being aquatic plants and several new nominations are being considered.

Alan Snow is project manager for the proposed standard, which he says will enhance relationships between buyers and sellers in Australian markets by establishing common ground.

Defining features of plants are likely to help determine names, for example, Mermaid’s Necklace has been proposed for the green seaweed species Chaetomorpha coliformis; Red Sea Lettuce has been suggested for Grateloupia turuturu, the largest red seaweed in the world.

“There is so much variation in the names used for aquatic plants across Australian states. We’re trying to remove the confusion between industries about what to call a certain commercial species, or ones that have the potential of being commercialised in the future,” Alan Snow says.

“Stakeholders are sending in lists of species and the names that they use for them; we are asking the industry for suggestions.

“Where there’s a unanimous agreement, the decision will be non-contentious and will most likely pass,” he says.

“But some species can have four to five names in the marketplace and individual companies may have to give their consent to the proposed changes.”

Alan Snow says worldwide access to knowledge about edible aquatic plants and their common names will be vital in developing and maintaining Australian and international markets into the future.

Establishing a single name for a species will increase the efficiency of trade procedures, including final health certification by quarantine authorities and provide consistency with international naming protocols.

“Once the standard is developed, it will be available on the FRDC website, so it will be open access. Anyone in the world will be able to search it and have knowledge of the Australian Standard and it will assist with communication in the domestic marketplace too.”

The project has received three years of initial funding from the FRDC to develop and maintain the standard in its first phases.

Additions or changes may be subject to an annual review process, giving stakeholders an opportunity to contribute as the market evolves.

The standard is proposed to be finalised by June 2019.