Although it is difficult to estimate the extent of food fraud related to Australian seafood, globally food fraud is estimated to cost the food industry more than $50 billion a year, and seafood is one of the top four sectors involved.

In 2016, a review of priorities by SafeFish (a body funded by the FRDC to provide technical advice to support Australia’s seafood trade and market access) found that fisheries stakeholders were highly concerned about gaps in seafood traceability and authenticity systems.

While traceability and authenticity are separate issues, Stephen Pahl says problems with either have the potential to jeopardise the reputation of individual businesses, seafood species and brands, and the Australian seafood industry as a whole. 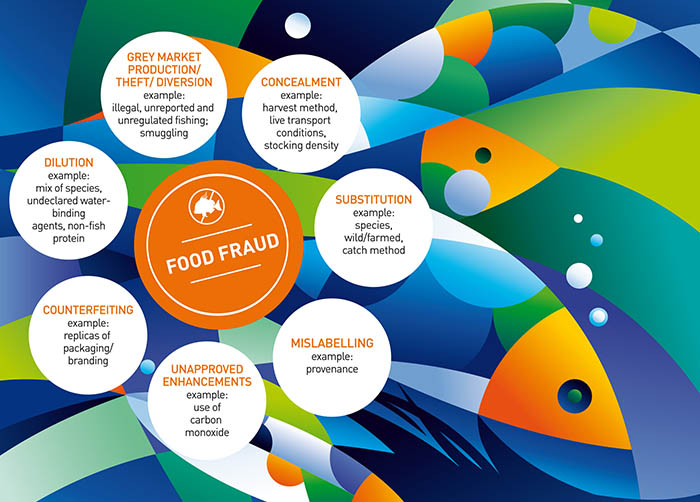 He says mislabelling may be a simple and inadvertent quality-control issue, and relies on having agreed names for species consistently applied across all fisheries jurisdictions. This underlying framework is provided by the Australian Fish Names Database managed by the FRDC.

However, food fraud or counterfeiting is a more deliberate attempt to gain a financial advantage, usually by substituting a less-expensive product for one with a higher value, and there are diverse activities under this umbrella (see Food Fraud diagram).

One of the food safety issues associated with fraud and substitutions is the sale of seafood species susceptible to natural toxins or heavy-metal accumulation, such as shark, as a species that has a lower heavy-metal risk. Other issues include products treated with illegal chemicals to give the appearance of freshness, or repackaging of expired product that may contain harmful bacteria. 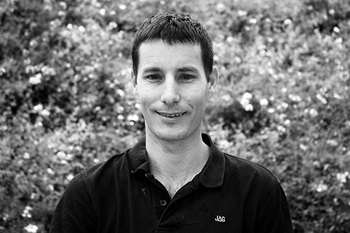 Stephen Pahl says traceability follows a product along the supply chain, and the minimum standard in Australia is being able to track a product at least one step forward and one step back. More comprehensive systems can track a product from a fishing vessel or aquaculture lease through to the consumer (see FISH vol. 23 no. 3 for an in-depth discussion of these systems).

Gaps in traceability make products more vulnerable to substitution and also make it difficult to address food safety issues, in particular to recall a product if an issue is discovered.

Meanwhile, authenticity processes determine whether a product is what it purports to be, based on its inherent characteristics: is it the specific species it is supposed to be, wild or farmed, from a specific location, fresh or thawed?

Stephen Pahl says the ability to detect fraud can act as a deterrent to help prevent these illegal practices and protect the reputation of Australian seafood. In the European Union, more stringent, full-chain traceability requirements are being put in place, which may affect the ability of Australian exporters to access these markets.

Stephen Pahl says businesses will need to evaluate which techniques best meet their specific needs and budgets. The first step is to conduct and document a food fraud vulnerability assessment – what are the risks and where are the potential substitution or weak points in the supply chain?

See the report Authenticity for the Australian Seafood Sector: A Review of Available Tools to Identify Substitution and Mislabelling here.

Barcodes and labels as part of paper-based systems remain the primary traceability systems in operation, tracking products through the supply chain to point of sale. In 2014, GS1 DataBar barcodes were established as the global standard for traceability, facilitating information exchange across international borders and different systems to track harvest and other information.These are not intended for point-of-sale scanning.

Quick Response (QR) codes are two-dimensional computer-generated images printed and added to packaging and are a consumer-focused extension of traditional barcodes. These allow consumers to use smartphones to scan the codes and learn more about a product.

Serialisation is a whole-of-business and supply-chain approach and has been widely adopted in the pharmaceutical industry. It provides unique identifiers for every product and has been used to aid both traceability and authentication. It can be used on packaging and labelling, including on gill tags attached to fish.

Radio-frequency identification tags (RFID) are tiny electronic chips that store data and can be tracked without the need for physical contact or a line of sight (which barcodes need). This system is used as part of the Australian National Livestock Identification System for cattle, sheep and goats and is also being tested on Australian prawn trawlers as part of an FRDC project (2012-702 and 2015-711). The Hong Kong–based Fukui Shell Nucleus Factory is reported to be embedding RFID tags as pearl nuclei in molluscs to enable each pearl to be uniquely identified, track-and-traced and authenticated.

Microbranding is being used to etch unique identification codes or symbols onto microdots, which are then physically applied to a product. Microdot particles are so small that they are generally invisible to the naked eye, providing covert protection. They are frequently used in combination with overt warning systems to provide greater deterrence against fraudulent activity.

NanoTags™ are being used by the Australian Wild Abalone Program to protect product from counterfeiting. The tags, integrated into packaging or attached to abalone shells, include a certification mark and an individual export code. This initiative was developed with assistance from FRDC project 2009-723. In 2007, Australian oyster growers trialled a similar DataDot™ product, but at the time it was found to be too expensive for everyday use. Research is also underway to develop encodable nanomaterials, known as nanobarcodes, which could be added to packed products to aid traceability. These are expected to be highly durable, machine readable and very difficult to counterfeit.

Distributed ledgers such as blockchain provide a back-end technology that securely records information from a primary source in databases hosted on multiple synchronised computers in decentralised locations around the world. This allows information regarding a product, such as origin, transport and processing details, to be securely recorded by each participant in the supply chain as it moves through, with all participants connected to and adding new ‘blocks’ of information using the same electronic ledger system. Whole-of-chain reporting has the potential to track a specific product in minutes, rather than days or weeks. Several seafood-specific trials are already underway, including a World Wildlife Fund project to track tuna. The international blockchain start-up Fishcoin also launched recently.

Visual assessments are the most traditional and low-cost method of assessing authenticity, although it is a process that is highly dependent on the skill of the assessor. It is also much more difficult to do once fish have been processed into flesh and identifying features such as heads, skin, fins and tails have been removed.

DNA techniques are considered the gold standard in authenticating a species. Although costs are coming down as technology improves, the processes involved can be expensive. They also require validated DNA reference materials for comparison. It can take several days for laboratories to deliver DNA results, and while these may authenticate a species they generally will not be able to verify point of origin or other harvest details. DNA can be damaged during canning or cooking; however, CSIRO is developing a technique that will allow it to extract DNA from seafood processed this way.

Mineral element analysis of bones, scales or shells can be used to produce an elemental fingerprint that identifies the geographic region of origin. This process is underway as part of a research project for the Australian prawn industry (FRDC project 2016-261), which is establishing a reference library of trace-element fingerprints to authenticate provenance of both farmed and wild-harvested prawns.

Spectroscopic methods use reflected light and other electromagnetic imaging techniques to identify the inherent characteristics of a product, using everything from near infra-red imaging to nuclear magnetic resonance. These methods are particularly useful in identifying contamination, substitution and adulteration issues. They have also successfully identified fish from different geographic regions, fish that has been thawed, differences in wild and farmed fish, and fish grown in fresh and brackish environments.