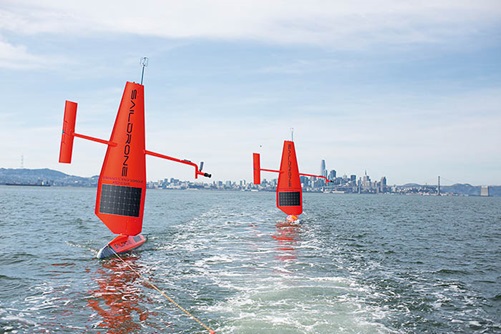 Saildrones are solar and wind powered and can be at sea for up to
12 months without returning to dock.
Photo: Andreas Marouchos

Bobbing on the waters of Bass Strait, between mainland Australia and Tasmania, a bright orange Saildrone attracts the attention of passing vessels, although they are warned to steer well clear rather than draw closer.

This is something far more sophisticated than a navigation buoy. At seven metres long and five metres high, the neon sailboat is what is known as an unmanned surface vessel (USV) – essentially an automated mini laboratory capable of continuously gathering complex ocean and atmospheric data, and even recording vision.

The Saildrone is just one model in an emerging armada of USVs worldwide that are setting out to counter our ignorance of marine environments, initially at least, in the name of science. This particular model comes from ocean technology start-up Saildrone Inc., in San Francisco.

CSIRO has entered a five-year partnership with the company, bringing three of its USVs to Australia earlier this year for use in ongoing research and development. Funding from the CO2 Cooperative

Overseeing the USV deployment is Andreas Marouchos, CSIRO principal engineer of the engineering and technology program and a research group leader at the Oceans and Atmosphere Division.

“Australia has a huge marine domain to monitor and USVs can address our three greatest challenges: the need to cover large marine areas, the need for persistence in observations and the need for greater scale.

“Autonomy is the future of ocean operations for both science and industry,” Andreas Marouchos says.

“It allows us to go where we need to go, to stay as long as we need to stay and to do it cost-effectively, at scale. While we can do some of these with traditional means, it’s really difficult to hit all three.”

Each USV is equipped with powerful sensors to measure ocean chemistry, meteorological data and marine acoustic signals. This data can be supplied to researchers in real time via satellite links or stored on board for retrieval later.

The Saildrones are made of carbon fibre, impervious to salt, and are solar and wind powered. They can remain at sea for up to 12 months without returning to dock, travelling at speeds between three and eight knots, and can be programmed to stay at the same location in a variety of wind and wave conditions. At least one drone has reportedly withstood waves of up to 12 metres in the Bering Sea.

Carbon measurements on board the Saildrone use technology developed by the National Oceanic and Atmospheric Administration’s Pacific Marine Environmental Laboratory in the US. This is a miniaturised version of the equipment used on high seas on research vessels to measure atmospheric and ocean carbon, which is critical for understanding carbon fluxes and carbon uptake in the oceans.

Another customised installation is the scientific echo sounder – a commercial product from Kongsberg Maritime modified and configured specifically for use on USVs by the CSIRO research team.

“We’ve spent a lot of time and effort to understand the noise environment at the surface of the vehicle which might interfere with readings,” Andreas Marouchos says. “There has been extensive acoustic calibrations in San Francisco and in Hobart to ensure we are getting the most accurate scientific data from the acoustic and other systems.”

The echo sounder transmits at the dual frequencies of 200 kilohertz and 38 kilohertz, which helps to monitor the ecosystem and identify the presence of fish to depths of about 700 metres for the 38 kilohertz frequency.

This is an extension of the acoustic systems that CSIRO’s research team led by Rudy Kloser has developed with early support from the FRDC, for use in fish stock assessments for Orange Roughy and Blue Grenadier.

That research led to the development of multi-frequency acoustic optical systems deployed on the headline of trawl nets during trawls, helping to correlate acoustic signals with images of the catch.

The acoustic component of this system is being deployed on Saildrone. Rudy Kloser says it will allow researchers to better characterise the ecosystem and will be able to recognise key species groups such as krill at ranges up to 200 metres. 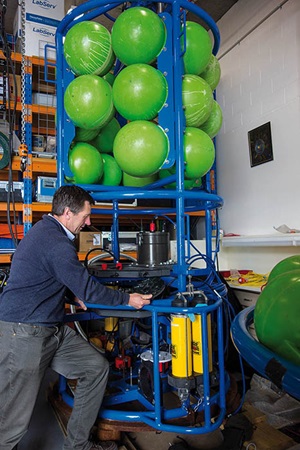 CSIRO is already using the USVs as part of a carbon-capture project and for general research in the relatively remote and unexplored Southern Ocean.

“For ocean operations, a USV is a really important tool for environmental assessments,” Andreas Marouchos says. “It won’t give us the full capabilities of a research vessel – it doesn’t have as much power or equipment – but can still do a lot of the work and we can go where we need to when we need to.

“For fisheries assessments, in the past this involved going to sea with nets and catching things and counting them and using well-informed science and statistics to form estimates about biomass.

“But now we can leverage more sophisticated tools to augment those efforts and to gather more information, and year-round, not just once or twice a year – ongoing monitoring.”

He sees potential applications in several areas, for instance following schools of fish, measuring the extent of marine heatwaves, tracking blooms of algae in remote areas, and being part of a system to monitor carbon capture and storage sites.

Into the twilight zone

The ocean zone between 200 and 1000 metres, or mesopelagic zone, is sometimes referred to as the ‘twilight zone’ by researchers. It is potentially home to large marine biomass, but little is known about the creatures that live there and their role in the ecosystem.

CSIRO’s PLAOS provides a unique combination of acoustic and optical sensors. When used together the multi or broadband-frequency acoustic signals from different species can be matched with their images, helping to develop new acoustic signatures for future reference and research.

Gradually, as data is accumulated, researchers will be able to build a picture of what lives in this mysterious ocean zone.

Rudy Kloser says researchers are keen to know more about this ocean zone, which is where large predators such as sharks feed.

“Globally it’s estimated that there might be between one to 20 gigatonnes of fish and other creatures in this range – that’s a lot of protein,
if we look at it from a food security perspective.

“But we don’t actually know what and how many organisms live in this space, what role these creatures play in the ecosystem and how they might be influenced by fishing or climate change. Internationally some countries are already fishing in this zone and more countries are beginning to look at these mesopelagic species with remote vehicles.”