Game fishers with a real  passion for Southern Bluefin Tuna are being invited to become Tuna Champions – experts able to seamlessly interweave sport, innovation and a duty to care for this iconic species 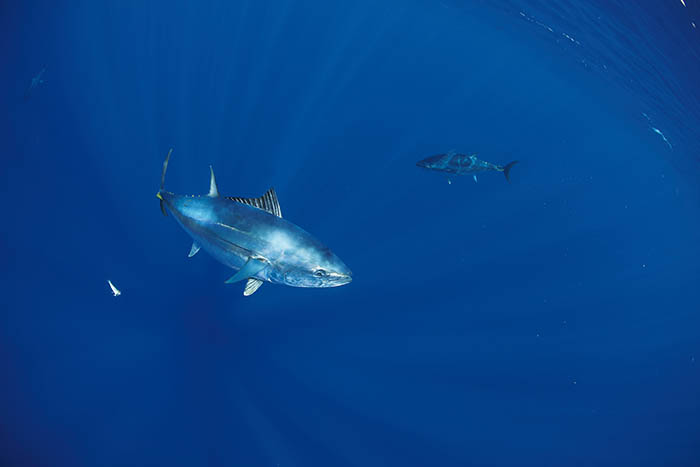 Southern Bluefin Tuna (SBT) populations are rebuilding after falling to as low as five per cent of their original global spawning biomass (those fish capable of reproducing), which is bringing the species back into the orbit of the recreational fishing community.

SBT is a large, migratory pelagic species that has one single global population. It suffered heavily over several decades, up to the 1990s, as a result of high international fishing pressure and a lack of coordinated management.

Since then, Australia’s commercial sector and others around the world have accepted steps to improve SBT management, which has included substantial cuts in catches to allow for a recovery of the stock.

The decline in stocks and contracting migration patterns had meant that SBT were beyond the reach of most recreational fishers. Even passionate fishing enthusiasts such as Al McGlashan – who produces and presents much-loved fishing shows, such as Fish’n with Mates – says he grew up never encountering SBT.

All those seeking to catch SBT, either commercially or recreationally, must continue to do so in a responsible way that ensures the upward trajectory for this species.

At the Australian Fisheries Management Authority (AFMA), Matt Daniels confirms that the species is showing positive signs of recovery internationally, with estimates placing the species at about 13 per cent of virgin spawning biomass and on a trajectory to reach 20 per cent by the mid to late 2020s. 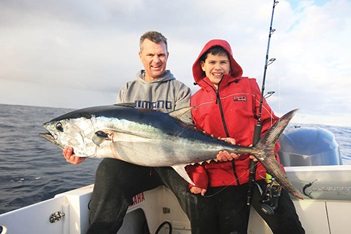 The SBT’s recovery has been warmly welcomed by sport fishers, many of whom are getting their first taste of fishing this superbly athletic species that can reach top speeds of 64 kilometres per hour and dive to 500 metres. The opportunity to encounter these fish, and the potential to catch a fish of 100 kilograms or more, has resulted in a rush to regional coastal towns during the annual SBT migration along Australia’s southern coast, bringing economic benefits to local communities.

Al McGlashan says that the SBT’s return has inspired a sense of wonder so profound that it has affected how he fishes, culminating in an urge to look after these amazing animals.

“I quickly went from catching SBT for sport, to learning how to process the meat for eating to the highest quality, to now just wanting to jump in to swim with them and film them,” he says.

“I feel privileged to have gotten to know this fish.”

A new initiative called Tuna Champions is seeking to capture this spirit of awe and empower recreational fishers to be stewards and leaders in helping to continue the recovery of SBT. Tuna Champions has received the unstinting support of experienced anglers and recreational fishing peak bodies, including the Australian Recreational Fishing Foundation (ARFF).

Tuna Champions works by providing a virtual community to share experiences, access expert advice, watch videos on handling and processing, and basically champion practices that allow fishers to get the most value and enjoyment from this fish – with the least wastage.

Tuna Champions is co-funded by the FRDC and Australian Department of Agriculture and Water Resources (DAWR).

The science behind the Tuna Champions educational resources is supplied by lead investigator Sean Tracey of the Institute for Marine and Antarctic Studies at the University of Tasmania.
Sean Tracey previously led one of the world’s largest SBT post-release survival studies using satellite-tags; the results of that study, funded by the FRDC, underpin some of the newly acquired knowledge available to Tuna Champions. A prime example is an understanding of the relationship between fight time and the physiological stress that affects SBT’s ability to survive being caught.

New educational materials have been designed to flag best-practice catch, handling and processing methods for catch-to-eat and catch-and-release, as well as some specific material on tagging to assist conservation efforts.

“A key focus is to reduce wastage and unnecessary mortality of this amazing species by considering all aspects of the fishing experience from hook to plate,” Sean Tracey says.

Included are tips to improve capture techniques to reduce stress and post-release mortality if the angler chooses to release the fish, through to fish processing methods to ensure the quality of the meat is at its best and as much of each fish as possible is used if the fish is kept for eating.

“We will be sharing tips not only from recreational fishers, but also from the commercial industry and chefs that specialise in making the most of the fine food products they showcase through their cooking and restaurants,” Sean Tracey says. Also central to Tuna Champions is a spirit of community, a willingness to innovate and a desire to blaze a trail for an ethos that seamlessly interlinks sporting enthusiasm with responsible fishing practices – from accomplished experts and influencers through to beginners.

“Tuna Champions is all about getting everyone working together,” Al McGlashan says. “We are not about assigning blame for what happened before people knew about stock management. Times have changed. Now everybody can be part of the solution.”

That is a key message that inspired his latest filming project Southern Bluefin, sponsored by the FRDC, which recounts SBT’s story and encourages recreational fishers to act as stewards of the fishery.

“This film has a powerful message,” Al McGlashan says. “SBT were almost completely smacked. But look at what we have done! We turned it around.”

The film is set for release in early 2019 with possible outlets including commercial Australian television channels, Netflix, the Discovery Channel and National Geographic.

As a signatory to conservation agreements, Australia was recently required to account and report on all sources of SBT mortality. For the first time, this will involve a national harvest estimate for the recreational sector, which the Australian Government is funding.

Sean Tracey is in charge of acquiring the required data. He is applying several survey methods across different states to a sample of SBT recreational fishers, in order to extrapolate the national total.

“We are well aware that people gain social and possibly health benefits from being out on the water fishing and there are proven economic benefits to regional communities from recreational fishing,” Sean Tracey says.

“This survey provides an opportunity to estimate the recreational harvest of SBT, and to better understand the nature and scale of this important recreational fishery.”

Recreational fishers who already do or have an interest in catching SBT are being invited to become Tuna Champions members, subscribe to the champions newsletter, download videos or exchange views, ideas and experiences on social media. As of October 2018, more than 1000 people were already following the Facebook page.