Our national judge lifts the lid on what it’s like to eat fish and chips for every meal, as well as what gave Western Australia’s Hooked on Middleton a winning edge 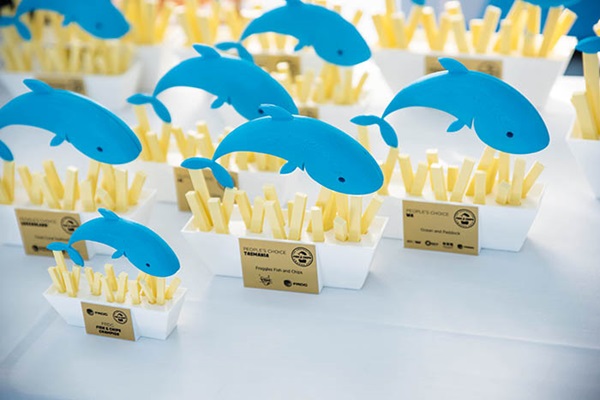 It sounds like a dream job: national fish ’n’ chip judge. In many ways, perhaps it is – especially if you’re fond of a battered deep-blue diet. But as any food critic will tell you, sometimes you have to eat a bag full of bad to find the gloriously golden winners.

The competition was fierce as the FRDC sent nine judges into the fryer to sample the seafood swagger of some 35 national finalists from Queensland, New South Wales, Victoria, Tasmania, South Australia, Western Australia and the Northern Territory, and to whittle the list down to state winners, and of course the national numero uno.

Eating fish ’n’ chips is often a fast affair. Five minutes in the fryer, a quick dash to a perch, then the furious face stuffing begins, before the chips get cold.

Our mission was to sample one grilled, one battered and one crumbed fish – whatever species best suited each application, according to staff at any given venue. We investigated their connection to local seafood suppliers and fishers, and their local community too, the information they supply about species and sustainability and considered cleanliness, freshness and how well it was seasoned, cooked and packaged.

Last year was an eye-opener in regards to some world-class fish ’n’ chippers down under. In 2018 we discovered a whole new kettle of keenly competitive fish ’n’ chippers: enthusiastic, passionate and eager to inform guests of every minor detail if they asked.

What is evident is that fish ’n’ chippers have it tough. Long hours, a high-priced, fragile product and a low average spend means they’re always run by owner-operators with few staff. And yet the best operators were really in their element doing Australian seafood proud.

What surprised us the most were the undiscovered gems – the shops and the passionate staff, including some fabulous young people with such a good attitude and customer service. You just wanted them to win because of their commitment and belief in the product. 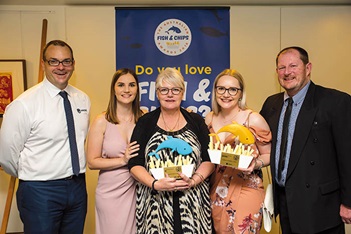 The Vale family, from left, Kelly, Janine, Hayley and Shane, from Hooked on Middleton, collected the award for the nation’s best fish and chips.
Photo: FRDC

It was also exciting to realise how varied good fish ’n’ chips can be, from a hole-in-the-wall with a small menu to a diner-style sit-down affair. Many operators were looking at the bigger picture too: not only great fish ’n’ chips and great local seafood, but supporting local fishers and educating customers about sustainability and the environment, including packaging, using local suppliers, QR codes and doing their own filleting.

We also got to appreciate how well supported some were by the locals. Often without prompting, passers-by or customers would voluntarily offer comments: “This place has the best fish ’n’ chips”;

“You’ve chosen the best place to eat”, or “You know they do the best fish ’n’ chips in the state.”

And for quite a few they were right. The state winners were exceptional, and some very good fish ’n’ chippers missed out on a gong too.

But there can only be one national winner. Western Australia’s Hooked on Middleton trains its staff to share knowledge of all fish on the menu. It is clean, switched on and blurs the lines between seafood restaurant and fish ’n’ chipper without hurting the hip pocket.

The menu changes daily and each day it has new fact sheets to complement it. The battered flathead was crisp on the outside with moist fish inside. Crumbed whiting was butterflied with the tail still attached – so crisp the tail could be eaten too. Bright Redfish was spot on grilled with a subtle lemon pepper and the chips crisp and made from local spuds. It is dining moments like this that confirm national fish ’n’ chip judge as one of the best jobs on the planet.

The 2018 National Fish and Chips A wards are over for another year. The FRDC is inviting your feedback on how they went. Perfecting how the FRDC runs the awards is an ongoing process. The 2018 awards were run with three key changes from the inaugural awards of 2017, based on feedback from fish ’n’ chip shops. These included implementing a consistent timetable across different states and territories to avoid confusion, a process of email verification to ensure all votes were genuine and the inclusion of a nomination option for shops in places with smaller populations. The judging criteria was also changed to merge the information and labelling criterion and introduce points for presentation.

Click here to have your say on the awards

The FRDC started developing the Fish and Chips Awards as part of a longer-term plan to raise awareness around key issues related to seafood (sustainability, labelling, management and use).

Central to the program is engagement with consumers and fish and chip shops across Australia – to have a conversation about these issues. It also aimed to increase traffic to FRDC-curated sources of information – www.Fishfiles.com.au (a central hub for seafood consumers) and www.fish.gov.au (the Status of Australian Fish Stocks reports).

The Fish and Chips Awards have gained a profile via media and word of mouth. The awards website and social media channels have been used to deliver information to consumers, allow for voting and increase traffic to the FRDC’s other sites.

The fish and chips shops are significant partners in the awards because they encourage people to vote, while also being valuable conduits for information. The shops showcase and provide consumers with information directly – either by having clear information present in the store or by directing consumers to sources of information. Throughout the awards the FRDC has supplied information on how shops can improve, which includes improving the information they supply.

During the year the FRDC has worked to grow and build the list of fish and chips stores that registered and participated. In 2018 there was about a 15 per cent increase in the number of shops getting votes.

The Fish and Chips Awards voting process and website were redeveloped in 2018 to increase security and allow for the inclusion of more information and links to content. This information was based on the voting assessment criteria – taste, service, choice (do they sell Australian?), information (labelling) and presentation.

Two additional levels of engagement were trialled in this year’s awards – when a vote was cast the confirmation and thank you emails contained randomised links to information on five areas – sustainability, cooking, industry, management and research. The goal was to get more people to find out about these issues and to assess interest levels in different kinds of information. While large numbers of consumers did not follow up the links directly back to the website, about five per cent did. The breakdown of engagement on different content types shows that information on sustainability is still of interest to fish and chip buyers.