Harry Davey fell in love with freshwater fishing when he moved to Tenterfield in northern NSW for a treechange. But he soon became concerned about the local environment.

Riverbanks had been cleared for farming and degraded over many decades by hoofed animals, robbing fish of much-needed riparian zone habitat that provides shade, a food source and in-river structures while also protecting water quality.

Inspired to make a difference, he attended an Inland Summit organised by OzFish Unlimited in 2016 as part of the FRDC-funded project ‘Empowering recreational fishers as champions of healthy fish habitat’.

There, he says he was “blown away” by being in a roomful of like-minded people “who had habitat, fish passage and the future of fishing as their main agenda,” and by their insights into how to make a change.

The summit included information from scientists on river health issues, fisheries managers on navigating the grants system and other fishers on fundraising. “It spurred me to think ‘maybe we can make a difference’,” he says. “I’m no scientist. I’m just a rec fisher but I branched out, and here we are today.”

Harry Davey leads the Tenterfield OzFish chapter, which he established with a group of fishing mates after the summit. Their first project planted 140 river gums and acacias along 300 metres of the Mole River, returning native habitat to stabilise the riverbank and re-create the natural ecosystem. And Harry Davey says benefits are already evident.

“Fish can get up to 40 per cent of their food from trees, and we are seeing a return of insects; come summer we will have cicadas and all sorts of things dropping into the river,” he says. “And we all really hope we can last another 60 years to see how the trees will grow.”

The ‘Empowering recreational fishers’ project was coordinated by OzFish Unlimited for the Fish Habitat Network between 2016 and 2018.

The FRDC and several state recreational fishing bodies, environmental groups and government agencies co-funded the initiative, which has been responsible for raising knowledge about the importance of habitat and providing recreational fishers with the resources they need to improve it.

“We wanted this project to build capacity to make a difference,” OzFish Unlimited CEO Craig Copeland says. “Rather than just transfer information we wanted to help create a legacy for the future.”

There are now 20 of these recreational fishing chapters across Australia. This has enabled a grassroots movement of recreational fishers to take the lead to support and restore fisheries through organising hands-on habitat activities in their local areas, he says.

The national outdoor retailer BCF has provided funding for multiple habitat initiatives being undertaken by newly empowered recreational fishers, including the restoration of shellfish reefs at Pumicestone Passage near Moreton Bay, Queensland.

BCF is also supporting OzFish as an organisation, helping to spread the word about habitat restoration to its 1.3 million recreational fishing customers.

OzFish is run by fishers and supports the chapters by helping with insurance, administration, project design and grant applications, allowing members to get on with the habitat work they are so keen to do.

“Without these groups, there’s a whole bunch of projects you wouldn’t see. It’s that simple,” Craig Copeland says. “Recreational fishers have created enthusiasm in all these locations for fish habitat projects and the whole idea is for us to make it easier for them to do it.”

While not funding any specific restoration programs itself, the ‘Empowering recreational fishers’ project has helped to build knowledge among fishers and provide a framework from which restoration efforts have spawned.

These efforts are wide ranging and include planting trees for habitat, shade and insects, re-snagging rivers, building shellfish habitat and reefs and even undertaking research projects.

Other initiatives include forums and events, education programs, the creation of information hubs, fishing groups and OzFish chapters, and the promotion of issues through the media. “We needed to have fishers telling stories, and those stories needed to be about habitat,” Craig Copeland says.

Communicating the habitat message really began when the Fish Habitat Network was created in 2009 by the NSW Department of Primary Industries Fisheries Division. The network brought together state-based recreational fishing groups and government agencies and provided the groundwork that made the ‘Empowering recreational fishers’ project possible, Craig Copeland says. In turn, this recent project has also now led more fishers to engage in the creation of the National Fish Habitat Strategy.

Connecting a network of recreational fishers and harnessing their willingness and desire to help could well have been the empowerment project’s greatest achievement, Craig Copeland says.

“They’ve got information that habitat is important, that they can make a difference and they’ve got the structure to allow them to make a contribution.” It is a sentiment Harry Davey wholeheartedly agrees with.

He has forged connections with groups in his area including Landcare, the birdwatching society and the local Aboriginal Land Council, leading to more projects on a “long list” including further rehabilitation works and improving access to fishing for people with disabilities.

“We are trying to get that inter-agency thing happening, and these relationships are now starting to bear fruit,” he says. “As Craig once told me, ‘if you build relationships, the trees will come’.” 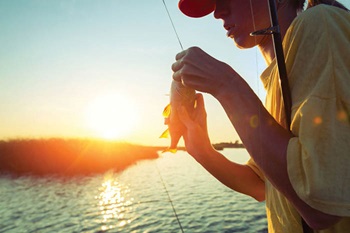 One of the major outcomes of the ‘Empowering recreational fishers as champions of healthy fish habitat’ project is the new National Fish Habitat Strategy.

The strategy was first mooted in 2012 to coordinate and communicate the fish habitat restoration efforts of agencies across Australia. It provides a framework to monitor and manage fish habitat, engaging with fishers to protect, restore and enhance recreational fisheries. It has four objectives.

“There’s probably not a recreational fisher I know who doesn’t want to leave a legacy of a better place than they have found,” he says. “So we are trying to give them the capacity to make that contribution.”