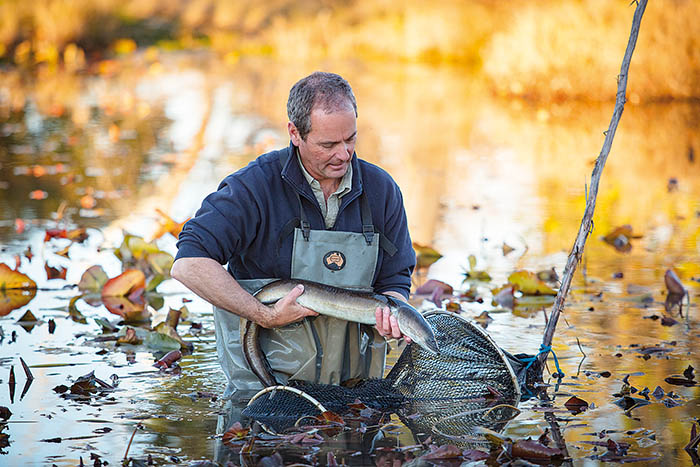 It is a 40-hour trip from Sale, in Victoria’s Gippsland region, to market destinations in Japan, China and South Korea. For exporter Southern Eels Australia, it is an ongoing challenge to ensure that its product arrives alive.

Lachlan McKinnon is a fisheries scientist-turned-fisher who established Southern Eels Australia with business partner Leo Chau two years ago to export Short-finned and Long-finned Eels (Anguilla australis and A. reinhardtii) to Asia. These are the same species found throughout much of Asia. While South Korea and Japan prefer locally farmed eels, wild-harvested eels attract a premium in China.

Establishing Southern Eels Australia has allowed Lachlan McKinnon to transform his expertise in eel biology into something much more hands-on – a move he has discovered is much more to his liking that his former career in fisheries research for the Victorian Government.

He spent more than a decade in research, including projects related to Victoria’s eel fishery. During that time he had seen the eel fishery decline as a result of the Millennium Drought from 2001–09. With less water in the landscape, he says there was simply less habitat for the eels, which spend most of their lives in fresh and estuarine waterways, including irrigation systems, although they migrate to the Coral Sea off north-east Australia to breed at the end of their lives.

Eight years ago Lachlan McKinnon made the leap from research to fishing, leasing three eel licences in Gippsland. With the fishery – and potential markets – now slowly rebuilding, he took the next step last year, buying the eel licences he had been leasing and an accompanying processing facility at Sale.

Southern Eels Australia now employs three fishers, who harvest eels from waterways and inland irrigation sources, and also buys Short-finned Eels from commercial fishers in south-west Victoria and harvests from farm dams. The business has focused on the lucrative, but somewhat challenging live-export market, trading directly with restaurants and caterers in to China, Japan and South Korea through in-country partnerships.

At Sale, eels are classified by size and then chilled to 5°C, which puts them into a sleeping state, allowing them to be packed into oxygenated bags, which are then boxed and transported by road to Melbourne Airport. During transit, temperatures must be held between 5°C and 10°C.

“The biggest risk is at the airport,” Lachlan McKinnon says, “particularly if it’s not a direct flight. We have a good relationship with the freight forwarder at this end and our buyers at the other end to ensure the highest-quality product arrives.”

The business averages 40 tonnes of eel exports a year with potential to increase trade once new processing facilities are completed. This is likely to include frozen eels to Europe, where buyers prefer to smoke their own product and which was a well-established market before the Millennium Drought. It could also include locally smoked eel sold into the domestic market.

The facility purchased in Sale included smoking and freezing equipment badly in need of an upgrade, which is now in the works thanks to a recent $123,000 grant through the Australian Government Regional Jobs and Investment Packages.

In 2017, the Victorian Government revised its Eel Fishery Management Plan for the sustainable commercial harvest of eels. This recognises the potential to increase the harvest up to 300 tonnes a year, and also recognises the importance of eels to Indigenous cultural practices.

Across Victoria there are 18 eel fishery access licences. Each licence has specific waterways allocated to it and allows 50 nets for the fishing of both Short-finned and Long-finned Eels. Specific waters are closed to commercial eel fishing in order to protect the spawning adult population and maintain recruitment to the fishery.