A new generation takes on the challenge of change

Building on the work of the founders, Australia’s women in seafood are undertaking new initiatives, championing their contributions and helping  to transform the seafood sector itself 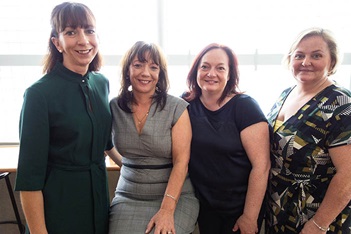 Celebrating its 20th anniversary this year, the Women’s Industry Network Seafood Community (WINSC) has inducted 20 leading contributors to its inaugural roll of honour during a gala dinner in Adelaide in October 2018.

More than 140 guests attended the dinner and unveiling of the honour roll, which recognises some of the industry’s most effective ‘quiet achievers’ who have worked tirelessly to support fishing businesses, their communities and the broader seafood industry.

The rebranding of WINSC as Women In Seafood Australasia (WISA) was also announced during the dinner, following a review of the organisation funded by the FRDC.

Newly elected WISA president Karen Holder says the organisation has focused in particular on raising the profile of women in the industry and recognising their achievements. This has included broadening the recognition and focus from fishers and their families to the wider supply chain, resource management and research.

WISA will also pursue opportunities to build the personal and professional capacity of women to contribute to their industry, reaching out to a new generation of young women. The FRDC provided bursaries that allowed nine young women to attend the workshop from around Australia, bringing valuable new perspectives and skills to the organisation.

Karen Holder says in its new form, WISA will work to expand its activities and to lead some new initiatives. Chief among these is the mental health initiative Project Regard.

WISA director Tanya King has played a pivotal role in this initiative as a social scientist and principal investigator of an FRDC-funded Sustainable Fishing Families project, which included a national survey of fisher health and wellbeing. The survey has identified high rates of psychological distress in the fishing community (see pages 4 and 5).

WISA has responded to this finding with Project Regard, and has developed a video featuring mental health ambassadors around the country – fishers and family members – who have bravely shared stories of their own mental health challenges.

“The video is a tool to start a discussion about mental health in the industry,” Karen Holder says. “It will help to begin recognising and then addressing the issue, encouraging relevant organisations to secure funding for the support services needed.”

Project Regard was launched during a Stronger Seafood Communities workshop in Adelaide in the lead-up to the WINSC 20th anniversary dinner. The FRDC-supported workshop had two key themes: the wellbeing of the fishing community and its members, and managing the environmental impact of human activities on oceans. 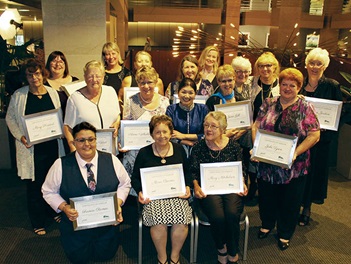 During the workshop participants heard from representatives of the Irish Women in Seafood Fisheries Network, who spoke about their efforts to reduce marine pollution and provide support for their communities in the wake of tragedies at sea.

Siobhan Faulkner outlined the Irish ‘Fishing for Litter’ campaign where trawl fishers retain any litter caught up in the nets and bring it in to shore for disposal. It also encourages fishers to ensure no litter is added to the marine environment during the process of fishing. The campaign includes the collection and recycling of nets to reduce the impact of the industry on the environment.

South Australia’s Claire Webber spoke about the Australian Southern Bluefin Tuna Industry Association’s program to coordinate the efforts of its member businesses in the aquaculture sector around Port Lincoln to clean up 155 kilometres of local coastline.

Trudy McIntyre, also from the Irish Women in Seafood Fisheries Network, provided an overview of the Lost at Sea Tragedies (LAST) initiative. This raises funds to provide financial and emotional support for fishing families when a family member dies at sea.

In a first step towards establishing a similar initiative in Australia, WISA held a raffle during its 20th anniversary dinner, which raised $6000. Karen Holder says considerable discussion is still needed about who would coordinate such a foundation, what support would look like  and whether it would only cater for the commercial seafood sector, as the Irish project does.

In addition to initiatives to support the health and wellbeing of the seafood community, Karen Holder says access to a new training initiative for members will be pursued. “We’d like to provide access to a webinar-based leadership program for members. This is something they could do in their own homes, in their own time to help build confidence and leadership skills.”

She says this is the kind of first-step program that could be a precursor to something like the National Seafood Industry Leadership Program sponsored by the FRDC.

WISA will continue to provide a voice through representation on the National Rural Women’s Council; immediate past WINSC president Leonie Noble is president of this national body.

Add your voice to Women in Seafood Australasia and join the network. You’re eligible to become a member if you are ‘actively engaged in or associated with the Australian seafood industry.’ Membership forms are available at the Women’s Industry Network Seafood Community website under the ‘About’ menu. Financial membership is $66, or join the community on Facebook to stay up-to-date with what’s happening and new opportunities.

The inaugural inductees into the honour roll are: