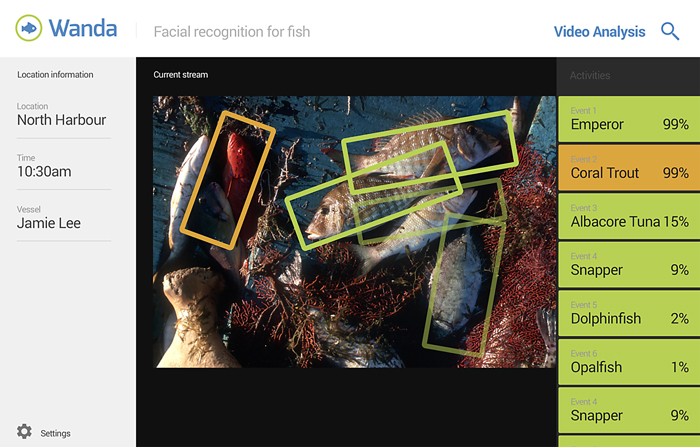 The use of artificial intelligence (AI) is coming to the Australian fisheries sector in the form of new software that can identify which fish are being landed on board a vessel based on video from electronic monitoring.

Called ‘Wanda’, the program uses advanced mathematical and computing techniques such as deep learning – a subset of AI – to automatically detect and identify fish species.

Wanda is the product of a CSIRO research collaboration between its Oceans and Atmosphere and Data61 divisions, with the Australian Fisheries Management Authority (AFMA) providing imagery to train the new software.

CSIRO fisheries scientist Rich Little says the software has so far been trained to recognise several species, including Yellowfin Tuna, with about 85 per cent accuracy. But with access to more images to help train Wanda, he anticipates this will increase to more than 90 per cent accuracy.

The development of Wanda began in 2016 when CSIRO Oceans and Atmosphere fisheries scientists Rich Little, Geoff Tuck and Rob Campbell teamed with CSIRO Data61’s Dadong Wang to explore the potential of a machine-learning product for species identification in fisheries.

Currently, electronic monitoring imagery is reviewed by people who identify different fish species. “But we realised this was a constraint on the current technology, and discovered there was a very large need nationally and internationally for our new program to automatically identify fish species and to remove this human element,” Rich Little says.

“As a commercial product the market is quite small; the most likely customers are typically regulatory agencies and resource managers.”

However, the potential application of the technology continues to expand as more countries introduce on-board electronic monitoring in their fisheries. Wanda sits amongst a cohort of similar initiatives being developed around the world, including those led by the UN’s Food and Agriculture Organization and another led by Queensland’s Department of Agriculture and Fisheries.

Human observers are required to monitor a certain percentage of activity in various fisheries to meet assessment targets and enable effective data analysis. This can vary greatly – anywhere from five to almost 100 per cent of activity, depending on the fishery and what observers are looking for, with an average of about 10 per cent.

There is potential for electronic monitoring to be used in other Australian Commonwealth and state fisheries. It has also recently become mandatory in some New Zealand and Chilean fisheries.

“It’s a growing trend, worldwide,” Rich Little says. “And with the right training, Wanda will be able to assess all of the available video, rather than a small fraction. We think we will be able to help further reduce the costs of monitoring through the automatic identification of species.”

While species identification features will begin with target catch species, it is likely to expand to byproduct and bycatch species as well as threatened, endangered and protected species.

Rich Little says increasing the amount of fishing time actually scrutinised has the potential to significantly increase public confidence in the fisheries sector. From both a management and an industry perspective, it will provide greater evidence of compliance – that fishers are doing the right thing, and are known to be doing so.

From the initial concept, when it came to developing the software Rich Little and Geoff Tuck joined with Dadong Wang at Data61 for expertise in the computer vision and machine learning processes.

Initial video training has used test data from AFMA, but really requires thousands of images all up. But it’s not just a matter of identifying a fish. The program needs to be able to identify where in each frame the fish is – often as it is sliding across the deck of a working fishing boat.

In the early stages of training, this means someone needs to find the fish and graphically put a binding box around it so that Wanda can ‘learn’ where the fish is and what it looks like.

The more images used in training, the more accurate the results. While imaging technology continues to make huge gains, the sophistication required to distinguish certain species is likely to make it impossible for wholesale use.

Recognising the long-term savings available to industry of this technology, AFMA is keen to work with CSIRO to provide access to imagery from its Eastern Tuna and Billfish Fishery (ETBF), which has the longest and most extensive video dataset in Commonwealth fisheries.

“As the ETBF is a longline fishery, it generally brings fish on board one at a time – unlike a trawl fishery – and this will make training and identification easier,” Rich Little says.
Swordish, and Yellowfin, Albacore and Big Eye Tuna are likely to be the focus of the initial AFMA case study designed to demonstrate Wanda’s effectiveness.

A postdoctoral researcher will be employed as part of a three-year project to refine Wanda. But with the new dataset, Rich Little says results with high accuracy could be achievable in six to eight months.

Eyeing a smarter catch in the trawl sector

Significant issues of bycatch, biosecurity and environmental benefits are being addressed through new technology that gives trawl-net fishers ‘eyes in the net’.

While camera technology is becoming an essential part of on-board monitoring for fisheries compliance, it is also being applied to improve the efficiency of trawl fishing.

DigiCatch is the name of a new ‘precision fishing technology’ developed by US company SmartCatch. CEO Mark Dahm presented at last year’s Seafood Directions conference, saying the system has provided a two per cent reduction in bycatch for some users, which could be worth up to $100,000 to a trawl business. It provides ‘eyes in the net’ via real-time, high-definition video that allows fishers to see what they are capturing – at depths of more than 900 metres – before the catch is landed on deck.

Combined with another SmartCatch innovation, SmartNet, fishers can release non-target species from the net underwater through a pre-catch release system. Mark Dahm said it allowed fishers to maximise catches of target species within quota, while avoiding non-target species that could lead to fines or potential fishery closures.

Additional digital sensors also convey information about salinity, depth, location and acidity – information that is vital for biosecurity and traceability, which is becoming increasingly important in seafood markets as consumers demand detail on seafood origin.

Mark Dahm, whose background in technology includes more than 25 years working in Silicon Valley, in the US, said it was his passion for the sea that led him to apply his technology skills to the fishing industry.

The DigiCatch technology was voted the Gold Winner for Innovation in Sustainable Solutions in the 2016 Edison Awards and is being used by some major players in the North American seafood industry fishing in the Bering Sea.

While the technology has initially been expensive, costing about US$40,000 (A$53,7500) a system, Mark Dahm said the price was fast coming down and could be retrofitted to existing gear. Eventually, he said, the system could become cost-neutral as the data recorded by the technology builds and becomes more valuable.

“Data is the oil of our time and we believe the major commercial seafood companies, the government agencies and fishery councils will pay for that data and subsidise these devices on the boats so it becomes standard practice,” he said.

The technology could help sustain the fishing sector as well as fish stocks, helping fishers comply with regulations while providing consumers with the sustainable seafood they sought.

“We start right here with what begins with DigiCatch in the net capturing data at the point of capture ... and ultimately it’s about a great piece of protein on the plate,” he said.
Mark Dahm said Smartcatch delivered on a triple-bottom-line objective to bring economic, ecological and social benefits.

“There is huge economic impact in being able to bring this type of technology to the seafood industry; there is the ecological component of building sustainable ocean technology to save our fish species and make our supply chain more efficient; and then there’s the social and the food security aspect ... and as we know, seafood is really good for us.”