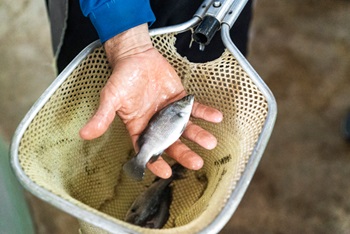 A 12-month international study tour has Dan Richards, from the Northern Territory’s Humpty Doo Barramundi, more confident than ever that Australian Barramundi could become the ‘white fish’ equivalent of Tasmanian farmed Atlantic Salmon.

Dan Richards is his family company’s general manager and has been investigating Australian Barramundi’s potential via a Woolworths-sponsored Nuffield Scholarship.

He says the farmed Barramundi market definitely has the potential to grow in Australia, but the industry needs to address three key issues: genetics, management and disease.

“Disease brought into Australia from uncooked, imported Barramundi products is the biggest threat to the industry,” Dan Richards says.

“Lobbying to push for change to government policy on Barramundi importation regulations must be a priority. Alongside this, a high standard of domestic biosecurity must be a feature.”

Any biosecurity lapse which introduces a disease that affects Barramundi “could wipe out not only the Australian Barramundi farming industry but could also impact on commercial and recreational fishing, tourism and Indigenous uses of the fish”, he says.

Throughout his Nuffield Scholarship he investigated disease prevention, including a visit to Barramundi Asia, a company that farms its fish in Singapore’s southern waters.

“It really opened my eyes to the disease risk that we face from imported fish,” Dan Richards says. “They have been so impacted from disease that they have also developed their own vaccine company. At last count, they vaccinated against seven diseases. The scary thing is they import fish into Australia.”

Barramundi, also known internationally as Asian seabass or Australian seabass, is native to the Indo–West Pacific region of South-East Asia. It is farmed in several countries including Singapore, Malaysia, Indonesia, Vietnam, Israel, Thailand, the US, Poland and the UK.

Global farmed production of Barramundi was estimated to be 72,500 tonnes in 2014, according to the United Nations Food and Agriculture Organization, while Atlantic Salmon production was 2.3 million tonnes.

Domestic Atlantic Salmon production in Australia has also increased, from an estimated 40,000 tonnes in 2014 to about 60,000 in 2017. However, imports of Atlantic Salmon are minimal, being restricted to processed products, which helps to reduce biosecurity risks for the sector and also underpins its position in fresh and frozen markets.

As part of his Nuffield Scholarship Dan Richards investigated genetic and management strategies that could increase production.

He says Barramundi has the genetic potential to develop further as an aquaculture species, with investments being made globally to increase production capacity.

Although there are a few limitations to the species, such as melanisation of the flesh and relatively low fillet yields, these can be improved incrementally over time with genetic selection and breeding programs.

“For the ongoing competitiveness of Australian Barramundi farming, investments into genetic breeding programs are essential,” he says.

The Richards family has been farming Barramundi for 25 years, since Dan’s father, Bob Richards, took over a fledgling local business.

Dan Richards has spent the past 11 years working on the farm (after a decade in environmental management), and says the sector’s potential has not yet been realised.

“When I applied to Nuffield three years ago, I wanted to more thoroughly investigate this question: could Australian Barramundi be the white-fish equivalent of Atlantic Salmon and what conditions were required to make this a reality?”

His final report was published in June 2018, and he believes the answer is definitely “yes”.

“If we work on genetics, management and disease, I do believe Australian Barramundi has the potential to challenge salmon.” 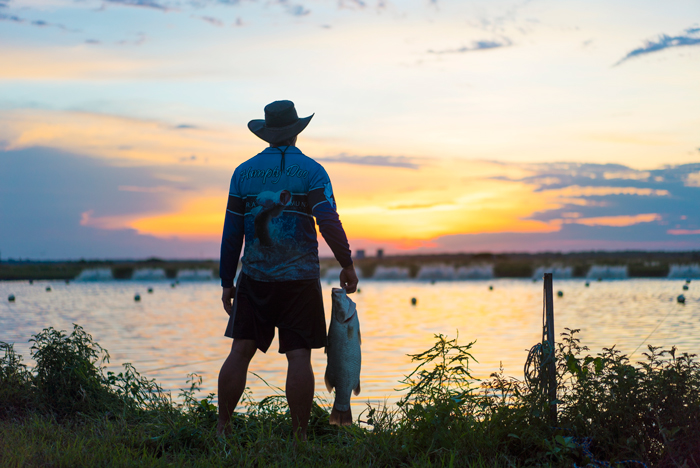 A key stop on Dan Richards’ Nuffield study tour was Norway, the world’s largest Atlantic Salmon producer. He visited various hatcheries and research, technology, farming and processing facilities, and met with the Norway Directorate of Fisheries. He says the development and management of the Norwegian Atlantic Salmon industry provided a useful case study.

“There are some similarities with Australia, such as high cost of labour and dispersed coastal communities. But there were also some marked differences, most notably that Norway has an extraordinary level of access and infrastructure along the coastline compared to the relative isolation of Australia.”

In 2017 Australian Barramundi production reached 6500 tonnes. This is the same level of production achieved by Norway’s Atlantic Salmon industry in 1979.

It has since grown to produce an estimated 1.4 million tonnes in 2016, making up 96 per cent of Norway’s total aquaculture production.

Although Australia shares some of these attributes with Norway, including ample natural resources, and the ability to access technology and high-quality research, he says the Norwegian west coast has extensive areas of sheltered, deep, glacial fjords.

“They provide the perfect conditions for sea-cage aquaculture. In contrast, the north Australian coastline lacks significant areas of coastline sheltered from storm and cyclone activity.

“This is particularly relevant in the tropical zones, where Barramundi can be most efficiently grown outdoors. Three separate Barramundi sea-cage operations in northern Australia have been destroyed by tropical cyclones and flooding.” 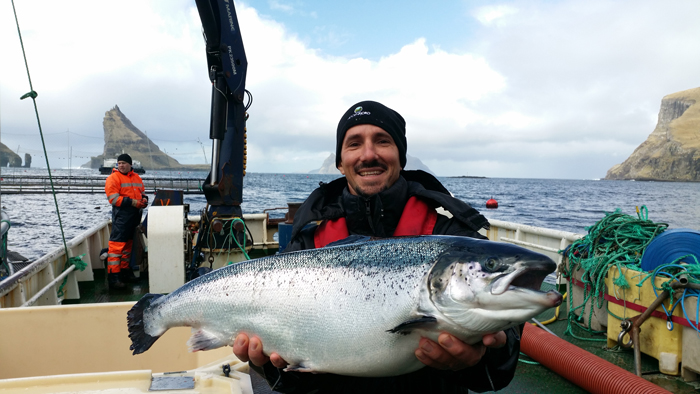 Dan Richards holding an Atlantic Salmon while visiting a farm in the Faroe Islands, an archipelago halfway between Norway and Iceland, 320 kilometres north-west of Scotland.
Photo: Humpty Doo Barramundi

In terms of regulation, the Norwegian Atlantic Salmon industry has a well-developed framework of aquaculture zones, impact monitoring and management.

Dan Richards says this regime has evolved and developed as a national approach over time to keep pace with salmon industry development and is commensurate with its significant production value.

“By contrast, Australian aquaculture regulation is managed at the state level and is fragmented, with a diversity of approaches and levels of commitment from the various state governments.”

However, he says that in recent times a number of state governments have taken the proactive step of identifying and pre-approving aquaculture zones to clear the way for aquaculture development.

“As the scale of the Australian aquaculture industry grows, its value contribution to the Australian economy is likely to increase and government regulatory regimes will further develop and mature.”

With Atlantic Salmon accounting for 96 per cent of Norwegian aquaculture, production there is a clear focus for investment in the country, he says.

“In Australia there are a wide range of aquaculture research priorities, so financial, human and technical resources are naturally spread. The point to be made is that while Australia has a high standard of research and science, there is likely to be fragmentation of R&D funding between a wide range of species until clear industry priority species emerge.”

He says the scholarships are a “fantastic investment in people and the industry. I encourage anyone who is interested in being a leader and ensuring a strong industry for Australia to apply”. 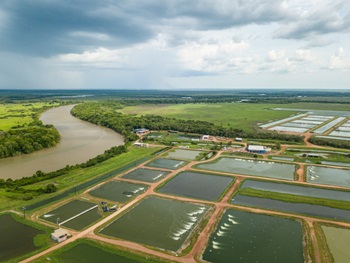 The loan comes from the Australian Government’s Northern Australia Infrastructure Facility (NAIF) and was only the second project to be approved for financing from the NAIF’s $5 billion fund.

The Richards family, which owns Humpty Doo Barramundi, will match the NAIF loan with bank finance of $28.9 million to fund a three-stage expansion, delivered over five years from mid-2018 to 2022.

The $14.4 million first stage of the Humpty Doo project will be co-funded between NAIF and the ANZ bank.

Managing director Bob Richards says he is pleased the farm can now invest in solar power and infrastructure, moving the business towards carbon neutrality while enhancing its position as a leader in sustainable aquaculture.

General manager Dan Richards says environmental milestones – such as carbon neutrality – are very important to the family and the loan is vital to meeting those challenges.

“In the Northern Territory everything is expensive. So while the loan will help us to reduce energy costs, it means more than that to us. Environmental stewardship is very important to us and environmentally we are an award-winning company and we aim to continue improving on that.”

Dan says the loan and family investment will also benefit the wider community, allowing the company to offer aquaculture opportunities to others in the region. “Overall, the opportunity will ensure all Australians and the world have access to Australian-grown seafood every day.”