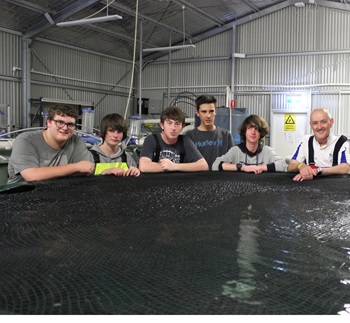 His family background too is firmly entwined with the development of aquaculture in Tasmania. Steve Harrison’s father, Tony Harrison, had been the deputy director of fisheries for Tasmania in the 1980s and was instrumental in establishing the Atlantic Salmon farming industry in the state.

But Steve Harrison was still, as he put it, “thrown in the deep end”. The timeframe was short, he says, and the initial plans were totally inadequate. The facility would be the largest of its kind, but needed to balance production potential with opportunities to learn about different aquaculture and water-treatment systems.

The Huon Valley centre is operated by Huonville High School, which is across the road. It offers a full range of subjects to secondary students from Years 9 to 12, in addition to the vocational training courses. It also offers stand-alone vocational courses for adults run by a range of registered training organisations (RTOs).

Five years after the first intake of students, 34 graduates have gained full-time work, Steve Harrison has won two awards for his innovative approach to teaching, and the Huon Valley Trade Training Centre is planning even stronger links with industry partners.

Each year the centre trains 15 Year 9 and 10 students, and 15 Year 11 and 12 students in Certificates I and II in Aquaculture and Certificate II in Maritime Operations. But it is far from a school environment.

Steve Harrison’s concept from the start was to run a workplace model, blurring the line between the job and the classroom.

“We knew from day one that we couldn’t run it like a school because we have some adults in the courses and we couldn’t expect them to be treated like school kids,” he says.

The training centre has a freshwater Atlantic Salmon hatchery, holding systems for draining tanks or to hold fish prior to harvest, aquaponics systems, a 12,000-litre tank for Atlantic Salmon production and a full commercial fish-farm licence.

There are no school uniforms or detention-style punishment. ‘Toolbox meetings’ replace assembly, and students clock in and out with their own time cards. Work placement with Tassal or Huon Aquaculture is the real deal. It might mean working long shifts or going out in the morning on the water when it’s 2°C.

The approach is proving successful. “The students really lift to expectations,” Steve Harrison says. “We’ve had real success with students who’ve been disengaged from school.”But the course is by no means an outlet for kids who are “good with their hands”, he says. The level of technological change in the Atlantic Salmon industry in Tasmania means students also need to be good thinkers.

Graduating students are equipped to become entry-level farm attendants, and then branch out.

One 18-year-old graduate became a bathing team leader at an Atlantic Salmon farm, overseeing the cleaning of fish with the gill parasite Paramoeba, which can cause a lethal allergic reaction in the fish. Another is now a feed controller with Huon Aquaculture, but she does not go anywhere near the water. She uses computerised monitoring and networks to operate the feed system from her desk in Hobart, 300 kilometres away from the fish pens.

Proud of his students’ successes, Steve Harrison is also proud of centre volunteer Mark Jones. The retired hatchery attendant tends the centre’s fish on weekends and was awarded Volunteer of the Year in both Huon Valley and Tasmanian Department of Education awards.

Steve Harrison’s own work has also been recognised with the awarding of a Churchill Fellowship and a $45,000 Commonwealth Bank Teaching Award.

He says the teaching award is really the result of a team effort by the centre’s 14 staff. The prize money has been combined with funds from other sources to buy a $12,000 remotely operated underwater vehicle as part of a new unit of study. These vehicles are increasingly doing the jobs of divers such as net inspections. 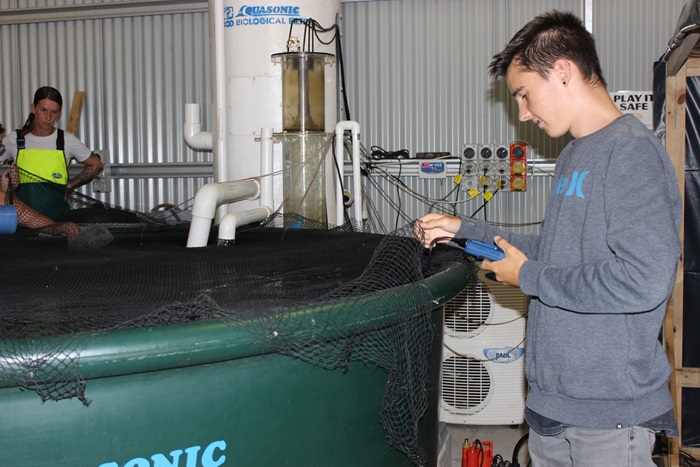 The funds will also develop two new projects. The first involves Tassal employers coming into the centre, training students and taking them back to their workplace. As part of this project, the centre is also negotiating with Tassal to use a sea cage for Atlantic Salmon to diversify training opportunities.

The centre currently keeps its fish in fresh water, harvesting them at 700 grams to sell through its commercial kitchen as hot-smoked salmon. A sea cage would allow the school to harvest the fish at five kilograms, bringing in significantly more revenue and completing the cycle of learning about the industry.

In the second project the centre will trial hatchery production of purple sea urchins (Heliocidaris erythrogramma) for the Japanese market. The urchins are native to Tasmania and also occur in Victoria. 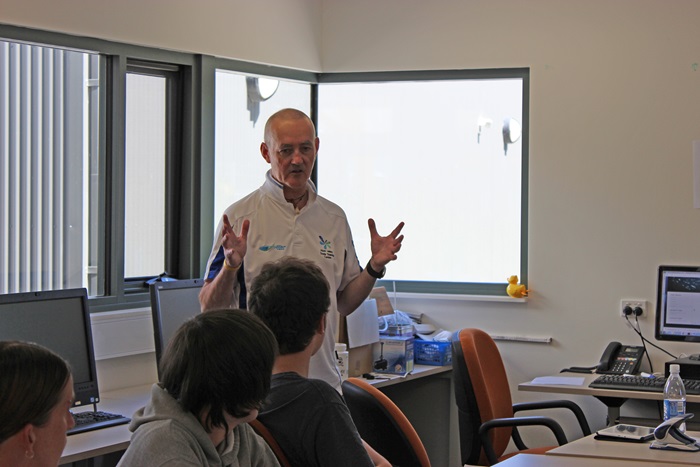 Steve Harrison is using his recent visits to Norway and Scotland investigating school-to-work employment pathways – made as part of his Churchill Fellowship – to establish a more structured and formal approach with industry.

“In Norway all apprenticeship training begins in the last two years of school. There is virtually a seamless pathway from school to work.” He hopes establishing closer, formal partnerships between school and employers will facilitate a similar pathway in Tasmania and add value to the training the centre provides.

He says the centre’s relationship with industry has evolved considerably from the early days when the companies engaged with the students as “good corporate citizens”.

“Employers can see, each year, 15 young people committed to getting employment in the industry, so if industry commits to supporting that training they have input into developing future employees before they actually employ them.”

This is especially the case as technological changes require new employees to be more ‘brain workers’ than ‘brawn workers’.

Steve Harrison outlined the development of the aquaculture training program and his Churchill Fellowship findings at the Primary Industries Education Foundation Australia Conference ‘Food and Fibre – the original STEM’, held in May this year.

He says the outlook for future graduates is bright. With industry experience and transferable aquaculture skills, they are in a prime position to take advantage of the $700 million Atlantic Salmon industry in Tasmania.

The industry has doubled in the past five years and is expected to double again in the next three or four years. With this growth comes a need to attract employees with higher levels of technical and fish husbandry skills, as farm practices continue to evolve.

“The Huon Valley Trade Training Centre course will continue to play a vital role in developing this future workforce,” Steve Harrison says. “Most importantly it gives the young people of the Huon Valley increasing opportunities to remain in the local community, adding to social capital and economic growth.” 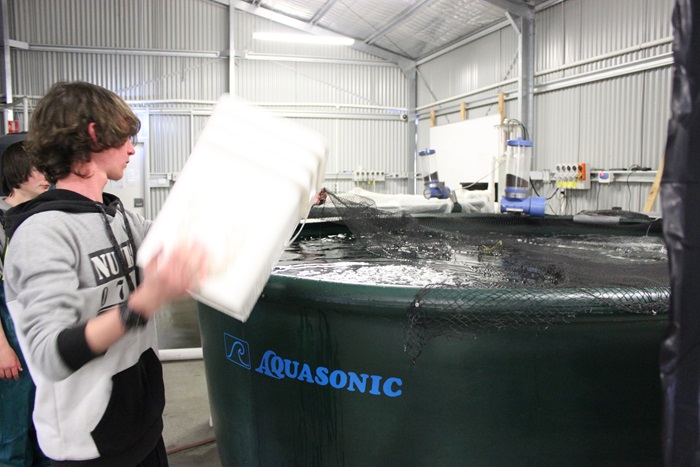