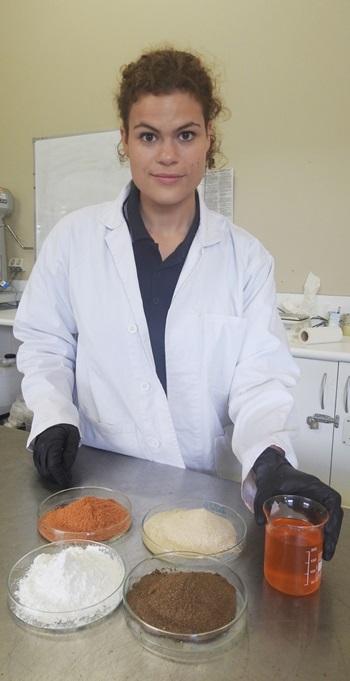 Caroline Candebat’s presentation on feed research won an award at a symposium in Spain.

Australia’s Yellowtail Kingfish industry has made waves at the recent International Symposium on Fish Nutrition and Feeding in Spain, where James Cook University (JCU) PhD candidate Caroline Candebat was one of four students awarded for their oral presentations.

Her presentation was on the interactive effects of the nutrients taurine and methionine in the diet of juvenile Yellowtail Kingfish (Seriola lalandi) at the Port Stephens Fisheries Institute in New South Wales. The research shows that the dietary requirements differ from that of similar species farmed elsewhere.

Yellowtail Kingfish is an aquaculture species prized for its fast growth rates, quality ‘white’ meat and global marketability. It is being farmed in South Australia, NSW and Western Australia. However, at this stage very little is known about its specific amino acid requirements.

Caroline Candebat has investigated the effects of amino acid supplementation on juvenile Yellowtail Kingfish health and performance. Her preliminary studies show that taurine requirements are dependent on the level of methionine in the diet.

Past studies on a closely related species (Seriola quinqueradiata), farmed in Japan, indicated that the fish may not have the metabolic machinery to produce amino sulfonic acids such as taurine, so taurine has been added to their diet.

Researchers thought this would also apply to Australian Yellowtail Kingfish, but Caroline Candebat’s studies have found evidence to the contrary.

“If methionine levels in the diet are sufficient, then it appears taurine supplementation is not as important in terms of achieving normal growth and development in juvenile fish.

“However, we still have much to learn about taurine and how it relates to other amino acids such as methionine and cysteine, or how taurine requirements are affected by environmental factors such as temperature or biological factors such as age.”

Follow-up experiments are investigating the impact of dietary methionine and cysteine levels to complement the taurine research, and to map the metabolic pathways of taurine synthesis in Yellowtail Kingfish.

After completing her practical trials at the Port Stephens Fisheries Institute, Caroline Candebat plans to finalise her research at the JCU Centre for Sustainable Tropical Fisheries and Aquaculture in Townsville.

“I’ve always had an interest in biology, which developed into studies of marine biology and eventually the aquaculture industry. I love collaborating with others in the K4P program to fill the gaps in knowledge about Yellowtail Kingfish – there is so much that we still don’t know about them.”

She says the K4P program, which winds up next year, has provided industry partners with important knowledge about nutrient requirements and how raw materials and feeds affect fish health, ultimately improving the profitability and sustainability of the industry.