Fishers step up to the festival experience 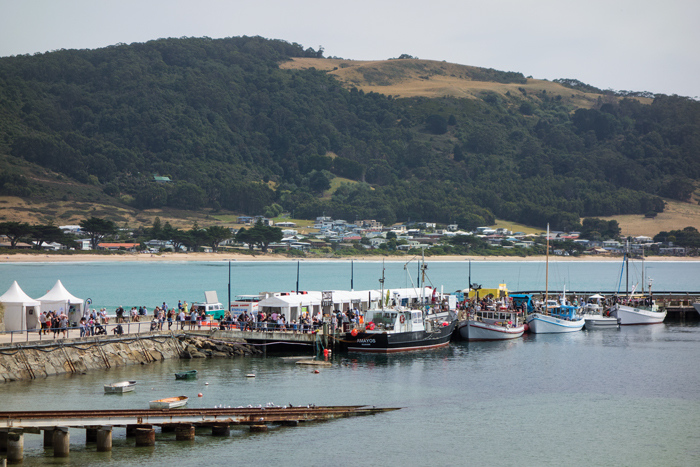 Victorian fisher Tim Harrington is more accustomed to time at sea than among big crowds, but earlier this year he obligingly moored his vessel for the day to share his story with visitors to the Apollo Bay Seafood Festival on the state’s south-west coast.

Thousands of people attended the festival’s main Harbour Day, some heading to the food booths around the Apollo Bay Fishermen’s Co-op, which sits on the hill overlooking the harbour. Fresh oysters, paella and seafood croquettes were just a few of the offerings, matched by craft beers and regional wines.

There were fish-filleting and cooking demonstrations at the co-op, and information booths dotted along the wharf opposite the string of fishing boats brought home for the event.

Many visitors stopped to chat with Tim Harrington, who was happy to share the details of his fishing life: week-long trips setting lines for shark and pots for lobster; the anticipation of the catch; the clean, fresh air and the open sea. He spoke of the challenges of a life on the water – uncertain weather, changing quotas and public misconceptions about what he does – for example, that all sharks are endangered. The Gummy Shark he targets is sustainable (for more information on the sustainability of Gummy Shark go to fish.gov.au). 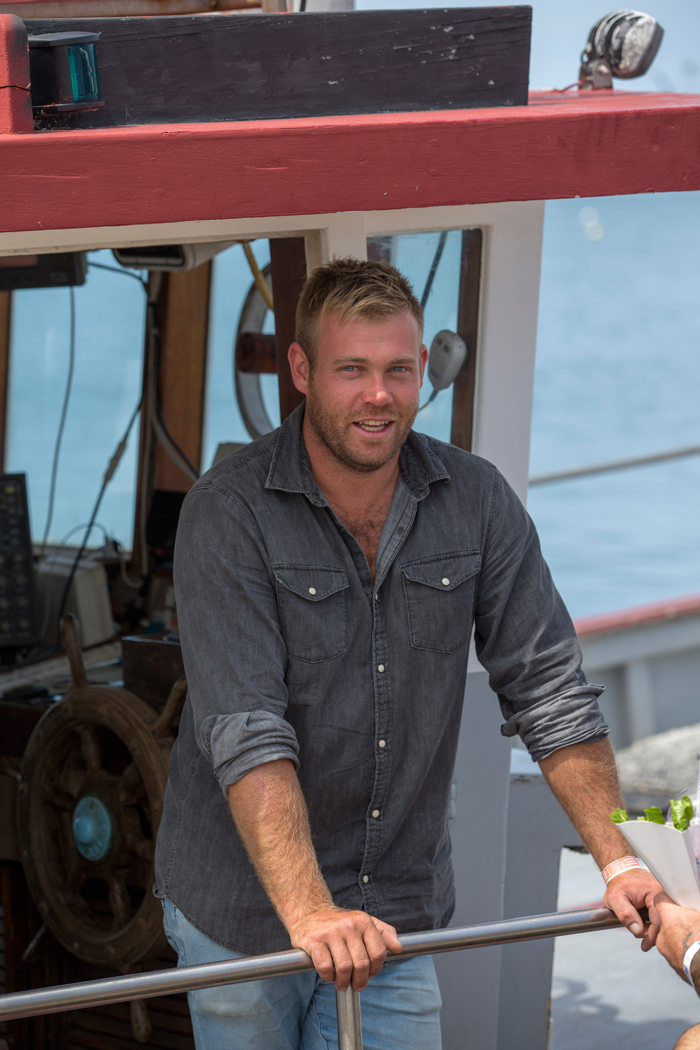 Tim Harrington also shared his best tips for interested seafood punters: buy Australian (you’ll know it’s well managed), buy freshly caught fish (of course) and give something new a go – a species you might not have tasted before – especially if it’s fresh.

It’s this kind of personal interaction with the public that Seafood Industry Victoria (SIV), as the peak body for the state’s professional fishers and the broader seafood sector, is keen to encourage.

Taking part in festivals and other major community events, and asking commercial fishers such as Tim Harrington to take part too, is a key plank in SIV’s five-year strategic focus, launched last year.

SIV chairman Markus Nolle says the organisation has recognised it needs to be more proactive in taking fisheries (including the fishers) to the people. 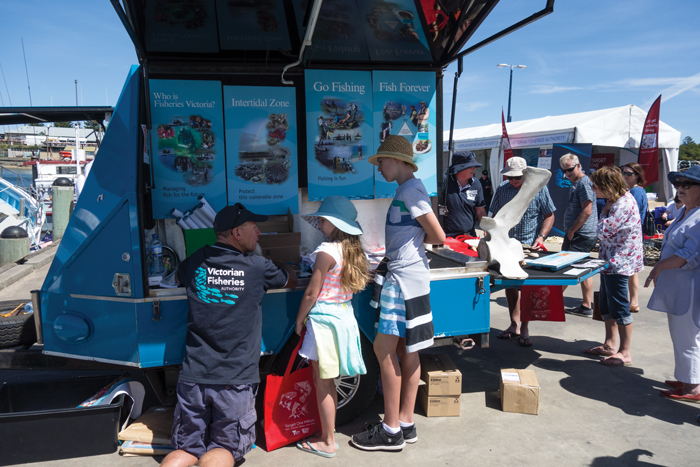 “In the past, we’ve been reactive, caught up in the day-to-day tactical issues of fishers and responding to government policy. Our role needs to extend beyond that, to promote fisheries and the value we deliver, particularly in rural areas,” he says.

The previous status quo was given a major jolt by the Victorian Government’s decision to close Port Phillip Bay to commercial net fishing, a process that began in 2015 and will be finalised by 2022.

This was a key commitment of the Victorian Government’s Target One Million plan for recreational fishing, which aims to grow participation to one million by 2020 and get “more people fishing, more often”.

The policy decision removes the 43 commercial net fishers who operated in Port Phillip Bay, making the bay an exclusively hook and line commercial fishery. The commercial net fishing catch was not large, at up to 700 tonnes, and some of this was used for bait. However, SIV estimates this closure represents more than one million serves of fish, mostly for Victorian consumers, which are no longer available.

The government’s decision to reallocate a large part of the bay’s fisheries resources to recreational users was based on socioeconomic drivers, rather than on concerns about the biological sustainability of commercial fishing. He says other states have seen similar policy decisions made in recent years. An example is Queensland, where recreational fishing has been promoted in conjunction with the closure of net fishing in Cairns, Mackay and Rockhampton.

Markus Nolle attributes the decision in part to the lack of visibility that fishers have in the eyes of the public; you cannot see a boat at sea the way you can see a farm and fence lines. Fishers have also been steadily disappearing from local communities over recent decades as the sector has contracted in the face of environmental, economic and political forces, including pressure from recreational fishing groups. 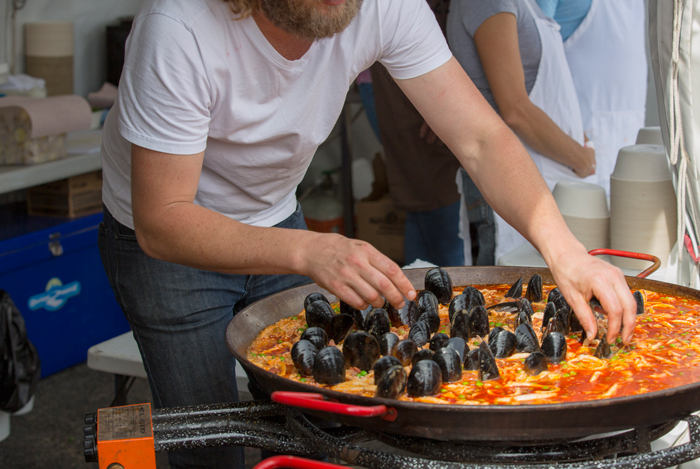 The Apollo Bay Fishermen’s Co-operative, which turned 70 this year, is one of only three fishing co-ops in Victoria with enough members to remain operational. There was once more than a dozen co-ops operating along the Victorian coast, with facilities established as part of a Victorian Government regional development initiative following World War II. The other active co-ops are at Lakes Entrance and San Remo.

Markus Nolle is a member of the Apollo Bay community, where he is a rock lobster fisher, and last year also joined the festival committee.

The festival committee has relocated the festival’s main event from the main street foreshore to the fishermen’s co-op and along the harbour itself.

The expanded three-day program included a sold-out “seafood feast” by chef Frank Camorra, from Melbourne’s MoVida restaurant. There was also a full house for the Sunday speaker program talking about fishing, farming, science and sustainability.

The importance and value of provenance and sustainability was an ongoing theme of the festival, with as much seafood as possible sourced from Victorian waters and all of it from Australian fisheries. Markus Nolle says promoting the importance of provenance is critical. 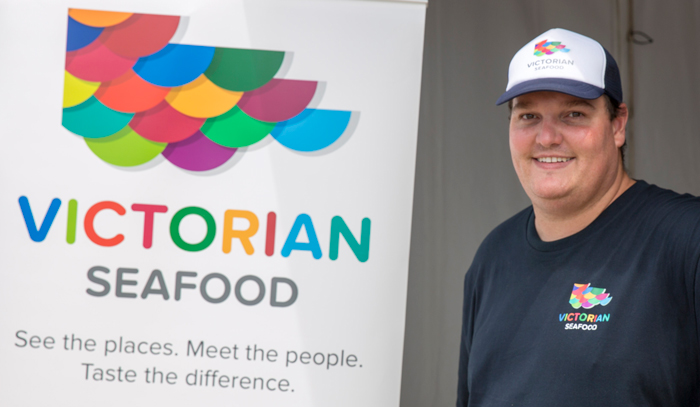 To do this, SIV has also participated in community seafood and fishing events across the state this year. These have included the SeaDays Festival in Port Welshpool, Hooked on Portland, and the Kilcunda Lobster Festival in January, as well as the Hooked on Lakes Entrance event in March. Others are on the calendar, including the San Remo Fishing Festival on Sunday 9 September, and engaging the community in activities on World Fisheries Day, 21 November.

The ‘Hooked on’ events are an initiative of the VFA, beginning in Lakes Entrance in 2017 and this year in Portland, and are designed as “celebrations of what seafood and fishing bring to the community”.

The VFA has also become a major sponsor of the Apollo Bay Seafood Festival and San Remo Fishing Festival this year.

Meanwhile, the FRDC is funding research into the socioeconomic benefits of the Victorian seafood sector, to be finalised next year, in line with similar research in New South Wales and Queensland.

These earlier projects demonstrated positive economic flow-on effects, including the finding that fresh, local seafood was an anticipated part of the experience for people visiting coastal communities.
SIV is confident similar positive benefits will emerge in Victoria, helping to build a tangible value proposition around the people, the produce and the places that make up the state’s seafood sector as something worth protecting and promoting.

In the case of Apollo Bay, a 2010 evaluation of port infrastructure prepared for the state government put the value of direct and indirect benefits from the local harbour at $43 million. The Colac Otway Shire also conducted a financial evaluation following the 2018 Apollo Bay Seafood Festival. This showed the festival had generated $1.8 million worth of economic activity for the town and $1.2 million worth of media coverage.

More importantly for the fishing sector, more than 10,000 people, including many of the 1600 locals, attended at least one of the festival-related activities, building stronger social connections for the community and for the local seafood sector. 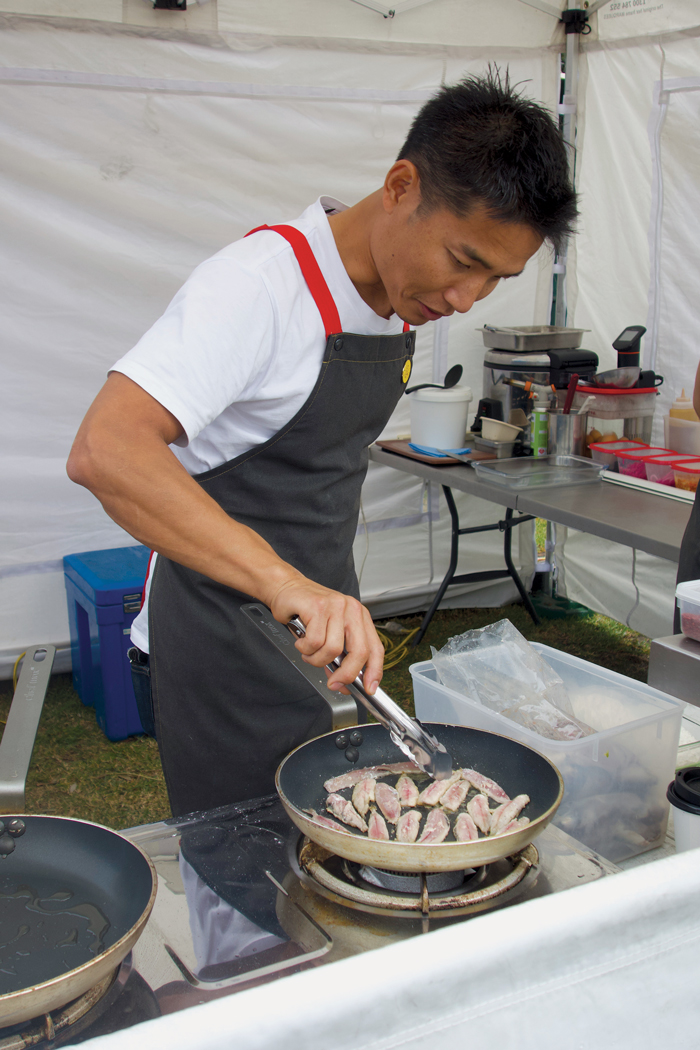 Modelled on the biennial Slow Fish Festival in Genoa, Italy, this Melbourne event was also the first ever held in the southern hemisphere. 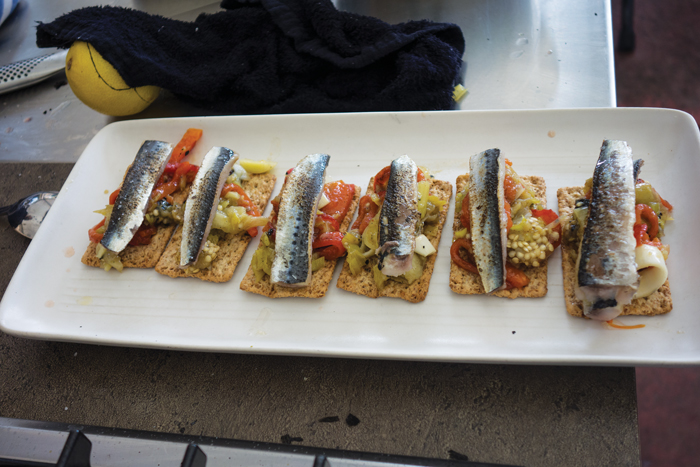 It was coordinated by Slow Food Melbourne, whose president Alison Peake says the slow food movement is about the politics of food and preserving local production.

“The loss of fishing licences in Port Phillip Bay has really brought the issue into focus; access to local seafood is under threat,”
she says.

A particular showcase for the festival, and for Melbourne Slow Food, is the humble sardine. The fish are sustainably harvested from Port Phillip Bay, but the days of local supplies are numbered. 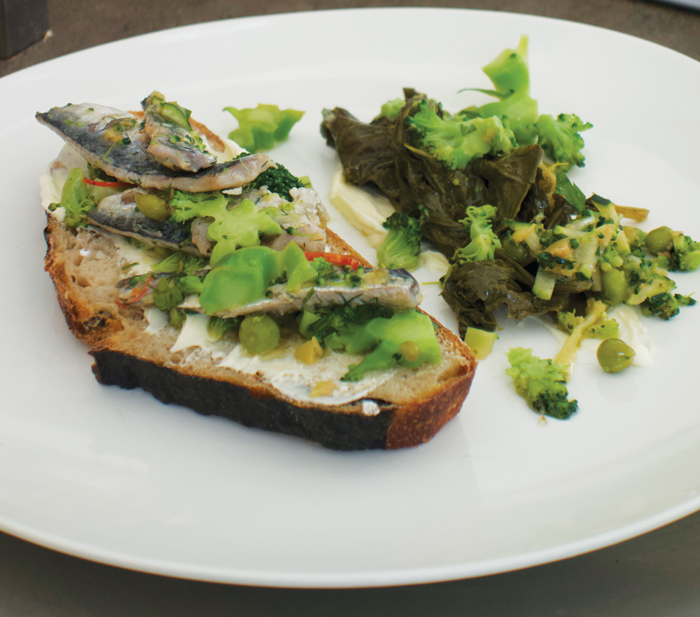 Fisher Phillip McAdam was among the presenters at the festival. He and his family are among the few fishers still fighting for the right to continue harvesting sardines from the bay, which requires the use of purse seine nets. The Victorian Government is committed to removing all net fishing from the bay by 2022, which will close the sardine fishery.

Sardines featured in the food stalls at the Slow Fish Festival at the Spotswood–Kingsville RSL Club in April and were also used in demonstrations provided by chefs from local restaurants that all have an emphasis on fresh, local produce. 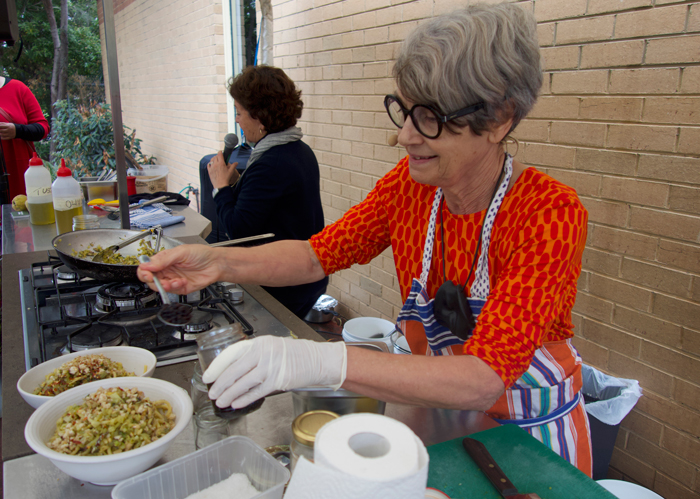 “We were pleased with the engagement on the day, despite bad weather,” Alison Peake says. “Our aim was to get consumers to support our fishers, and to raise the issue of the loss of access to local seafood. When we lose our seafood, we lose the fishers and the community that surrounds them.”

The 2019 Slow Fish Festival will be held on 3 March at Seaworks in Williamstown, Melbourne. 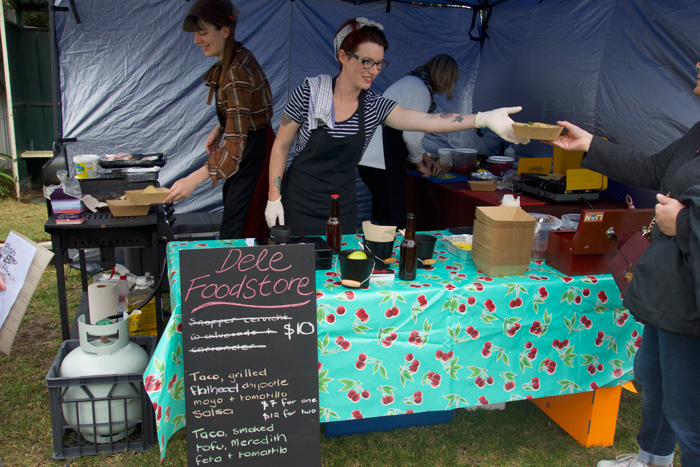