When it comes to fisheries data, Nadia Engstrom is the ‘go-to’ person in Queensland 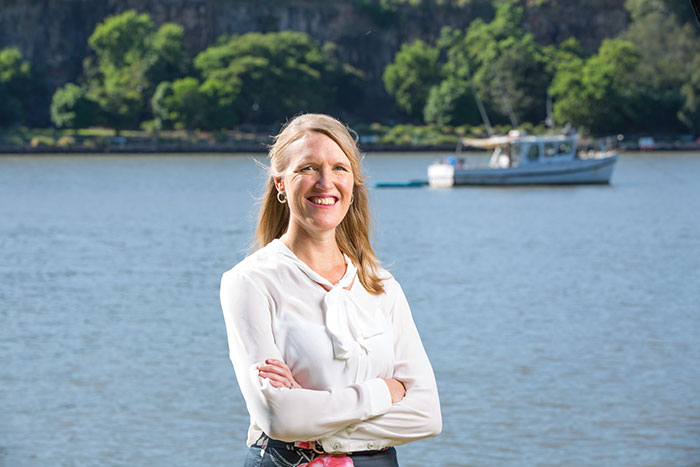 When Nadia Engstrom was young she loved catching prawns in Perth’s Swan River in Western Australia. Now as Queensland’s principal fisheries research officer, based in Brisbane, she spends her time catching outliers in the oceans of fisheries-related data for which she and her team are responsible.

An outlier is an observation in a set of data that sits a long way from the average of the sample. It could come about by human error or as a deliberate misreport. Either way, it can skew the results, she says. It must be queried and corrected if necessary.

But not every outlier is an error, says Nadia Engstrom, who leads the Queensland Department of Agriculture and Fisheries (DAF) teams responsible for collecting, verifying and analysing commercial fishing data. Analysis often reveals the larger story of our dynamic environments and our interactions with them.

One example of this was the 2011 spike in Barramundi catches off the central Queensland coast, she says – an increase in the order of 1500 per cent. Prior to this, the typical annual commercial catch in the region was somewhere between five and 16 tonnes a year. “The story behind the changing catch data was a flood in 2010,” she says.

Barramundi that had been growing in a major freshwater dam suddenly found themselves washed over the dam wall with the floodwater and out into the estuary. As the ‘escapees’ have been caught in the intervening years, the wild Barramundi catches in the region have declined to near-normal levels, without further intervention.

“But the information really tells stories, which fascinates me,” she says. “You can see the effects of different things and how trends emerge over time.”

From zoology to Zimbabwe

Science and the marine environment have been long-held interests for Nadia Engstrom, although it was not until she was 24 that she started her university course, a Bachelor of Science (Zoology) at James Cook University in Cairns, Queensland.

“I’d always known what I wanted to study, but when I finished school I just wasn’t ready,” she says. Growing up, she had moved with her family from Victoria to WA and then across to Queensland. After completing Year 12 she bought a one-way ticket to London, the start of almost a decade of independent travel around the world.

When it came time to return home, Queensland’s lifestyle and marine opportunities proved the drawcard. She had earned her diving certificate on the Whitsunday Islands, and during her travels dived on reefs around Asia, Egypt and the Red Sea. (Now based in Brisbane, her ideal getaway is a weekend on Moreton Island fishing with her husband and son.)

While studying, her interests always steered more to the ocean than the land-based zoology assignments, particularly when it came to data collection and field work. And from there, she quickly found herself drawn more to the process of analysing the information afterwards rather than to the data collection itself.

She joined Queensland DAF in 2006 after a three-month internship with CSIRO studying seagrass and macroalgae, and began teaching herself about data analysis and learning from others.

She was thrilled when a permanent position became available on the department’s data analysis team, which she now leads. “Data is one of the main things feeding into fisheries management decisions; without that information sometimes you’re going in quite blind. It’s so pivotal that people have correct and accurate information to make the right decisions.”

She says providing public access to fisheries data increases transparency in the workings of government. But, more importantly, it allows people to analyse the data themselves and make their own decisions.

The value of independent decision-making guided her solo travels around the globe – from 2 a.m. flights into India to expeditions to the hinterland of Zimbabwe. It remains an important principle in the work she does now.

To that end, she counts the creation of the QFish website as one of her best achievements to date.

QFish presents Queensland’s fisheries resource data in an easily accessible way. It allows anyone to instantly access data about both commercial and recreational fishing, export it for use in their own research or project, and create their own graphs from it. Nadia Engstrom says the QFish shark-control program data section is particularly popular with the media.

Commercial and recreational fishers, researchers, students doing school projects – anyone who is interested – has equal access to the information.

The website took more than two years to develop, and the public access to data and the website’s ease of use have improved the speed of access to data and reduced costs for those seeking information, while also freeing staff time to focus on improving the quality and accuracy of data.

Feedback from users has been good, and other jurisdictions have shown interest in this technology.

Nadia Engstrom also directs Queensland’s data contributions to the Status of Australian Fish Stocks Reports published by the FRDC every two years, which brings together biological, catch and effort information to determine the status of Australia’s key wild-catch fish stocks.

Two key projects in the reforms are the data validation plan and the rollout of vessel tracking on all commercial fishing vessels by 2020, both of which help validate the accuracy of data and provide evidence that fishers are doing the right thing.

Nadia Engstrom is particularly excited about a project as part of the Advance Queensland’s Small Business Innovation Research challenge calling for the development of an innovative, affordable, automated, electronic monitoring system for fishers.

The aim is to use cameras, sensors and machine learning to improve data gathering and make it easier for commercial fishers in commercial trawl, net and crab fishing operations to record information and submit it in real or near-real time to meet their regulatory requirements.

Queensland DAF has also put out a tender for a new commercial fishing app and an upgraded recreational fishing app.

The commercial app will allow fishers to report their catch information and undertake e-business transactions, such as managing their licences or quota. The recreational fishing app will include information on fishing rules, as well as a citizen-science component to improve data on recreational catch and effort.

Queensland DAF’s deputy director-general is a member of the working group, along with counterparts from other state and territory governments.

It aims to ensure that all jurisdictions collect data in a consistent way so it can be used effectively for research and reporting by groups such as the Australian Bureau of Agricultural and Resource Economics and Sciences (ABARES), CSIRO and the FRDC, who all attend the group’s meetings.

“I always walk away from the meetings amazed at how much we learn from each other,” Nadia Engstrom says.

While the working group members may share her love of data, Nadia Engstrom cheerfully acknowledges that not everyone is as enthusiastic, but she is heartened by changing attitudes that allow greater public access to data.

“Particularly in Queensland, it’s a really dynamic time in fisheries,” she says. “We’re trying to progress a lot of different initiatives to better manage fisheries in the future and have better understanding of stock sustainability.”