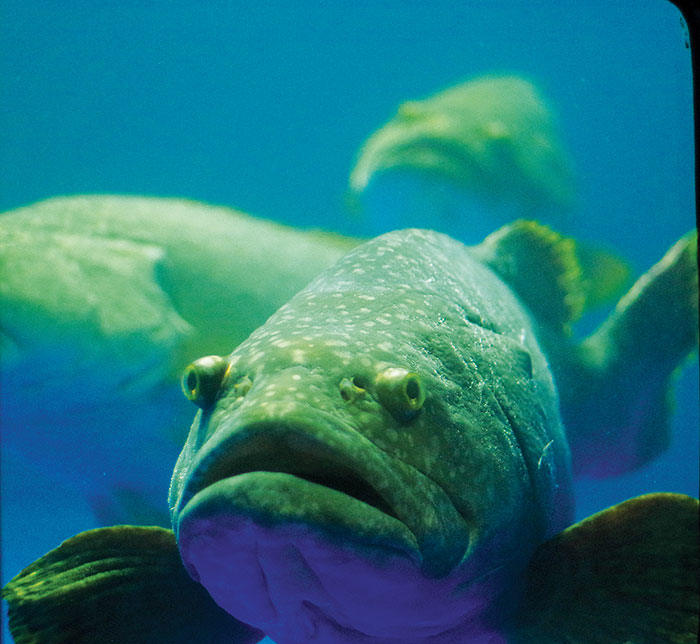 Queensland Groper is being trialled as an alternative aquaculture species
Photo: Richard Knuckey

The rhythms of farming life have returned to Queensland’s Rocky Point Aquaculture after a tumultuous 18 months.

This is despite the continuation of movement restrictions imposed on white spot disease-affected animals including prawns.

Instead of prawns, the Zipf family, owner–operators of Rocky Point Aquaculture, have used their knowledge of aquaculture and its business infrastructure to grow and market two new fish products, Queensland Groper (Epinephelus lanceolatus) and Cobia (Rachycentron canadum).

The change came about fortuitously, aided by FRDC-funded research and sheer determination from the Zipf family. While still reeling from the devastation of white spot disease, Rocky Point Aquaculture was approached by Richard Knuckey about Queensland Groper (also known as Giant Grouper).

He had initially led research into the farming of Queensland Groper as part of a Queensland Government research, development and extension (RD&E) project, but this work has since been taken up by The Company One, a registered Australian company. 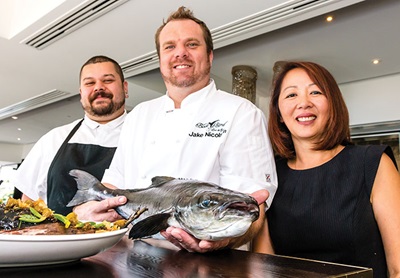 Richard Knuckey is general manager of The Company One and a member of the new FRDC-funded project investigating farming fish in the Logan River. He says the R&D being gathered now could potentially offer other white spot disease-affected prawn farmers a lifeline.

The company has for some time been keen to see an expansion of Queensland Groper production in Australia. “When white spot disease occurred, we had some fish here in Australia and we thought

‘Let’s make them available for free to affected farms’. We wanted to test if Queensland Groper could be an alternative,” he says.

With strict biosecurity measures in place, prawn farmers could not grow prawns or fish in their ponds. The Zipfs, however, were in a unique position – they had a large hatchery and a land-locked saline lake, a leftover from sand mining. Queensland Groper fingerlings are now being grown indoors in the hatchery facility before being moved to the lake.

A local market for the fish has also been found for the initial offerings (see 'Queensland Groper a feature for new venture' below).

As well as Queensland Groper production, the Zipfs decided to try Cobia farming, and approached the Queensland Department of Agriculture and Fisheries’ (DAF) Bribie Island facility.

However, Rocky Point Aquaculture offered Queensland DAF an opportunity – to evaluate Cobia performance in a tank-based system, a valuable addition to its existing Cobia research, which had focused on pond aquaculture. It also fit with the department’s strategic aim of expanding opportunities for Cobia aquaculture in Queensland.

It is too early to assess the viability of Cobia as an alternative for prawn farmers in the Logan region but the research is progressing well, he says. “We knew from earlier work that growth rates would be lower in the Logan, due to lower water temperatures, so a different model of production was needed.

“Working with Queensland DAF, Rocky Point Aquaculture developed a system of holding Cobia indoors in heated tanks for the winter, before growing them outdoors in spring, when water temperatures are increasing.”

The FRDC-funded project is evaluating Cobia and Queensland Groper’s performance within indoor biosecure aquaculture systems and then growing them in ponds. If the project is successful, Cobia and Queensland Groper could be overwintered indoors before being moved to ponds belonging to other affected prawn farms. “Diversification using species which are not carriers of white spot disease could be an alternative for these farms,” he says.

While there are differences between fish farming and prawn farming, Serena Zipf says the essential ‘husbandry’ aspects of animal handling, behaviour, feeding and disease are fundamentally similar.

“You still need to ensure that you cater to the needs of the animals you are growing and anticipate, where possible, what problems may be threatening in the future.

“Animals still need good-quality water and to be fed and checked every day to ensure their wellbeing. Once you develop a feel for what is normal for the species you are working with, the similarities between species become clearer.”

The Company One’s Richard Knuckey says there are some important differences between farming the different species. “Prawns are a reasonably short crop compared to fish.

“Queensland Groper juveniles are more difficult to grow and fingerlings are more expensive. The process requires more monitoring and input. But, that said, they have performed really positively.”

It takes 10 to 12 months to take Queensland Groper from fingerlings to a marketable product, while Cobia take 15 to 18 months.

Serena and Murray Zipf say they are encouraged by initial results but, like any new venture, acknowledge it is a long road to success. “We have suffered setbacks and have lost some fish. For us, it’s an ongoing R&D project – firstly answering ‘Can we grow it?’ and then, ‘Can we sell it?’” Serena Zipf says. “We are still learning.”

The family is investigating the steps required to take both fish operations to the next level.

“We’ve started to build a recirculating aquaculture system. It’s the logical next stage. We’d have total control over the weather, the temperature and biosecurity.”

She says although fish farming is still in its early days, it has helped the family move on from the devastation of white spot disease. “It has really saved us. We have moved back to the rhythm of farming and that has enabled a sense of normality for us and our staff.” 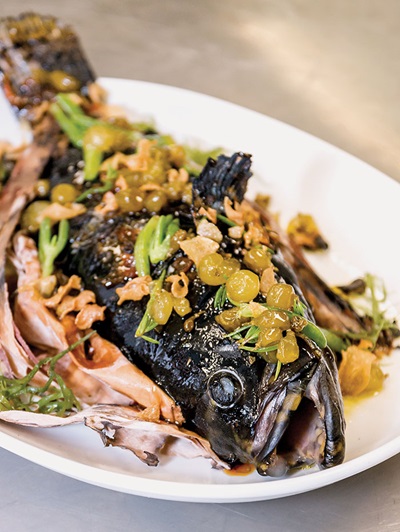 Rocky Point Aquaculture’s Queensland Groper will be a special feature item for new restaurant Donna Chang when it opens its doors in Brisbane’s George Street this July.

Groper will appear on menus and in the fish tanks of the Ghanem Group’s latest venture, a new take on a traditional Chinese restaurant.

Ghanem Group executive chef Jake Nicolson says the fish, with its beautiful bright yellow and black markings, is a wonderful choice for the new restaurant. “It’s a uniquely Queensland product, is sustainable and lends itself beautifully to the flavours of Chinese cuisine.”

The product will be sold live to the restaurant and delivered daily at a size of about one kilogram. Jake Nicolson says the fish, which has a fantastic layer of fat just beneath the skin, will be cooked on a wood-fired, open grill. “We will wrap it in paperbark and flavour it using a blend of Australian desert limes, Chinese black tea, local ginger and soy (pictured above).

“It will be the essential flavours of modern Chinese cuisine, beautifully highlighted by our unique Australian ingredients.”