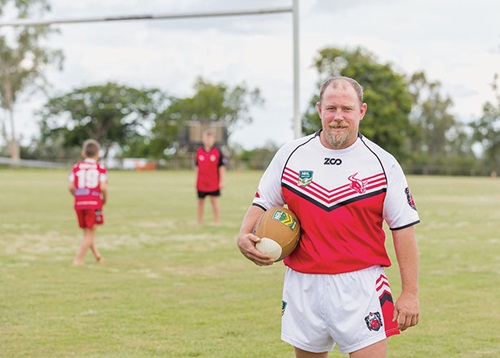 The small town of Dysart has been hit hard in recent times. About 250 kilometres south-west of Mackay, it was built in the 1970s to service nearby mining operations. So when the mining downturn hit, it hurt.

“We’ve had a few hard knocks, with people moving away and the mine closing,” says Melissa Macklin, a photographer and Dysart resident, whose husband Shaun works in the mining sector. “We lost shops and families and the town has been struggling.”

A highlight on the local calendar each year is the National Rugby League Masters Carnival, a chance for old friends and their families – many of whom have been forced to move away for work – to reconnect.

“It’s so important that we can get people together to have a bit of fun,” says Melissa Macklin, also manager of the Dysart Bulls Masters team, which includes her husband, a father and son, two sets of brothers and players aged in their sixties. “I think for some people it’s the highlight of the year.”

Making their participation in the Gold Coast carnival possible, she says, are sponsors, which include Debbie’s Seafood and Blue River Ice. They pay for the team’s registration and uniforms, which are colour-coded according to age. “So if the old fella’s in the gold shorts, no one can tackle him,” she explains.

Seafood vouchers also help with fundraising to pay for food and drinks during the masters carnival. “Without the help of our sponsors we wouldn’t have a team and we wouldn’t be part of it,” she says.

Have fish, will travel