Kicking around ideas with colleagues at the University of Sydney, chemical engineer Dale McClure saw potential for growing microalgae in the nutrient-rich water left over from intensive land-based fish farming. 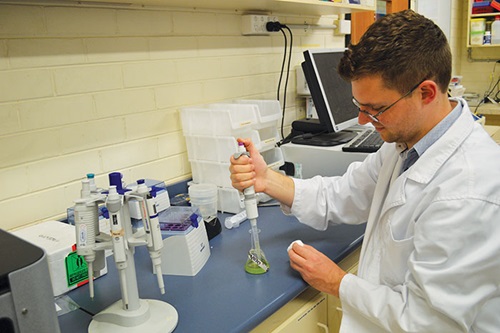 The project that evolved from this brainstorming session has now won him an FRDC-supported science and innovation award, which was presented by the Australian Department of Agriculture and Water Resources in March and includes $22,000 funding for further research. The awards are announced at the ABARES Outlook conference.

Dale McClure’s idea has the potential to provide a lucrative new income stream for fish farmers, using wastewater as the basis for growing algae that produce high-value pharmaceutical or nutraceutical compounds.

“The point is to take something that is a waste product and see if we can do something a bit more valuable with it.”

He says algae company MBD Industries is already using algae to remediate wastewater at prawn farms in northern Queensland, but his idea focuses on the production of high-value compounds.

“We are most interested in making vitamins and higher-value products that can be put into nutraceuticals or foods.” 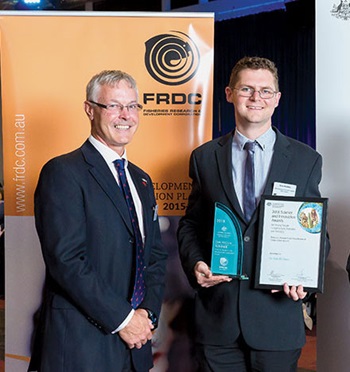 One such product is vitamin K1, which is important for blood clotting and is thought to help with osteoporosis and other bone diseases. This is currently manufactured chemically, but algae can be used to produce a natural source of it.

Vitamin K1 and another target compound, the weight-loss pigment fucoxanthin, are highly sought after by the pharmaceutical and food industries and can be worth more than $10,000 per kilogram.

“In the lab, we have done a bit of work to select the best algae species. We have worked out ways to prepare it so we can go from a little bit in a tube to enough to feed the process. That’s all doable.

“We have a few things running in the laboratory at a 50-litre scale,” he says. “They are going well at the moment, and what we would like to do is take some of them out of the lab and put them into a fish farm or somewhere outside and see how they go.

“We want to see what opportunities there are to commercialise or do something with the technology. We would be interested in chatting to anyone (in aquaculture) who is interested.”

He says it could reduce the costs of treating water, and may allow farmers to operate relatively low-cost and low-maintenance tanks to generate another product and diversify revenue.

Dale McClure is not sure how far away commercial application of the process might be, because the red tape “can be tricky”, but is confident he is ready to start testing on-farm.

Each year the Australian Department of Agriculture and Water Resources and its award partners present the Science and Innovation Awards for Young People in Agriculture, Fisheries and Forestry. The Science and Innovation Awards are a competitive grants program that provides funding for innovative research projects to benefit Australia’s rural industries.