Have fish, will travel

Sharon Petersen reckons she has the best job in the world, bringing seafood to far-flung communities around the Mackay region 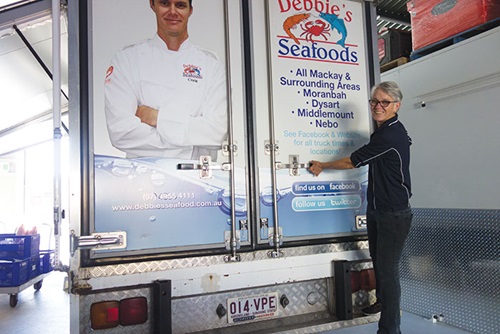 Sharon Petersen packs her truck in preparation for her Mornabah run.

While Debbie and Mark Ahern’s car was effectively Debbie’s Seafood’s first mobile retail vehicle 16 years ago, the fleet has grown over time with demand, travelling more than 750 kilometres to service clients every week.

Other seafood supply businesses also operate travelling retail trucks out of Mackay, although the Debbie’s Seafood fleet is the largest.

As one of the drivers, Sharon Petersen leaves Mackay at 6 a.m. each Thursday (barring cyclones) for the two-and-a-half-hour drive to Moranbah – a mining community 200 kilometres inland and home to a sizeable customer base. Without fail, she says, she is greeted by customers waiting for her. “No matter what time I arrive.”

Families and mine workers plan their menus around the fish she delivers, clearing her out of the 50 to 60 kilograms of fresh fish, plus 50 kilograms of prawns, she stocks. “The regulars come every week and you have a chat and it’s really nice,” she says. “It’s really worthwhile going.”

It is important, Debbie Ahern says, for people to have access to great produce no matter where they live.

Sharon Petersen, who has done the Moranbah run for Debbie’s Seafood since 2011, keeps her truck shop open until 6 p.m., allowing people to visit after they finish work. It means she does not return to Mackay until 9 p.m., but she would not have it any other way.

“I love it,” she says. “And the customers appreciate it. They support me every week.”