Voyage to an electric future 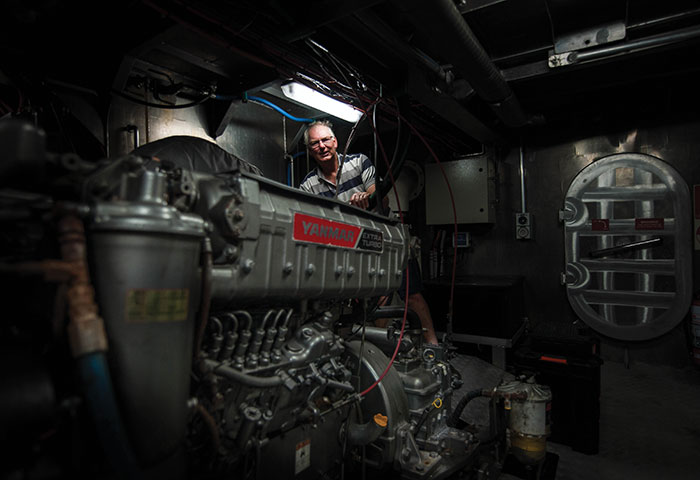 Dennis Holder is a career fisher, a 31-year veteran of fishing for Blue Swimmer Crab off the South Australian coast. In that time he has owned 11 boats, two of which he built and project managed, progressively modernising and innovating to keep in step with changing environmental, regulatory and consumer influences.

But with each progression there has remained a seemingly unresolvable issue: the high cost of running diesel motors, and also more recently his awareness of their hefty carbon footprint. The issue came to a head in 2010 when he built his latest boat, Silver Spectre, a state-of-the-art 24-metre vessel able to harvest about 250 tonnes of Blue Swimmer Crab a year.

“We’d built this fantastic boat, incorporating all the experience-based improvements we had made through the succession of boats we have operated, but were still handicapped by the motors. We agonised for months on what motors to install and even after this deliberation, the two engines we eventually selected were still going to cost us $10 an hour just in repairs and maintenance,” Dennis Holder explains.

“Because of the long periods of idling when pulling crab pots we knew we would be burning out injectors about every 1500 hours … so we came to the inevitable question: what else can propel a boat?”

That simple musing launched Dennis Holder onto an extraordinary journey of discovery that has brought him to the point he is at today: building Australia’s first commercial diesel–electric fishing vessel. It has also caused him to reflect deeply on the industry’s standing in society and the role that technology could play in reviving its reputation and morale.

His initial search for alternative engines was on the internet, where he found numerous pleasure boats running on electric motors and then finally a diesel–electric trawler built in Holland as part of a European Union investigation into ‘greening’ fishing fleets.

“I applied in 2015, not thinking I would be successful because at 52 I was over the age cut, but I was accepted as an FRDC scholar. It started a journey of inquiry into diesel–electric fishing vessels, but it has brought me to a far broader industry awareness.” 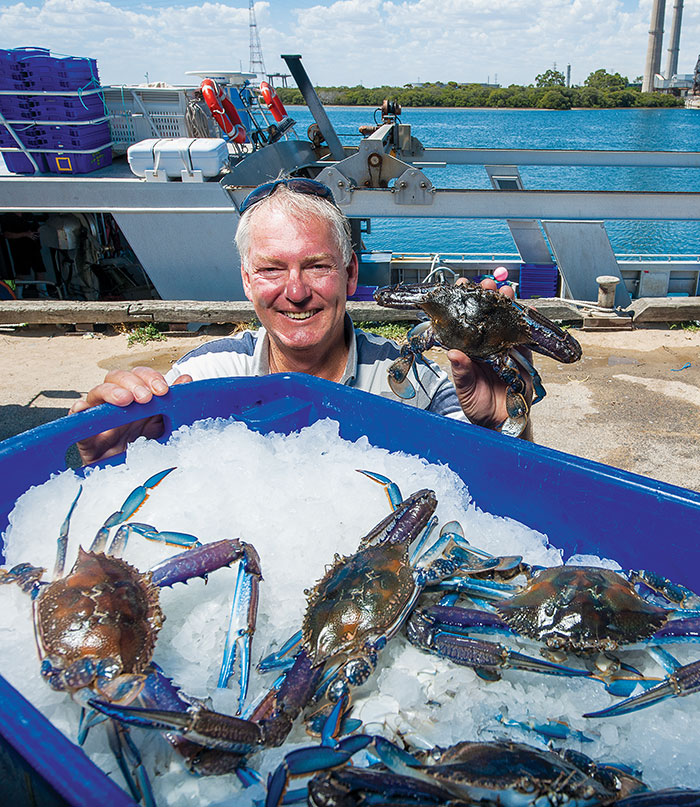 Dennis Holder travelled to Florida, The Netherlands, Norway, Iceland, Ireland and the UK, studying work being done on batteries, electric motors and power propulsion electrics. In his examination of the data he came across an unexpected, significant side benefit – a reduction in human fatigue.

“Take away the constant noise and vibration and the whole working environment is changed. I spent six hours on an electric-powered fishing boat in Norway (the first diesel–electric battery commercial fishing vessel in the world) and the operator said the reduced fatigue was allowing them to spend 20 per cent more time fishing. Their cod season is three months with no catch limits so this extra fishing time during that fixed period considerably increases his catch.”

But this was only one aspect of Dennis Holder’s journey: “My Nuffield project was titled ‘Old men, older boats, electric drive power storage, and power generation in commercial fishing vessels’. And it was the first part of this description that began to worry me more and more – the age of fishers and the age of their boats … translating to a lack of innovation and ‘get up and go’.

“I felt it was clearly connected to the overt negativity towards the industry from the community and governments over the past 30 years and the increasingly tough regulatory environment in the name of sustainability. “In other words for the past 30 or so years our industry, in Australia and internationally, has constantly been hammered by people telling us how bad we are. So it’s no surprise that we are not attracting young people or the new investment needed to stop the ageing process.

“It was actually heartbreaking to drill down through what started as a technical exploration and come to this realisation about a much more fundamental status affecting industry investment and innovation. Yes, there have been advances in equipment and fishing practices, but when it comes to our prime piece of equipment we, as an industry, are continuing to pour money into old boats.”

So for Dennis Holder, modernising boats gradually became a much bigger objective than electric motors; it was about embracing technologies that would once more make the industry respected and valued – particularly when considering the world’s population still relies on it for 30 to 40 per cent of its food protein needs.

He describes his Nuffield journey as opening his eyes to this wider challenge, and also to opportunities. He became president of the peak industry group in South Australia, Wildcatch Fisheries SA, and joined the newly established national peak body Seafood Industry Australia as a director, where he says he has found like-minded visionaries. 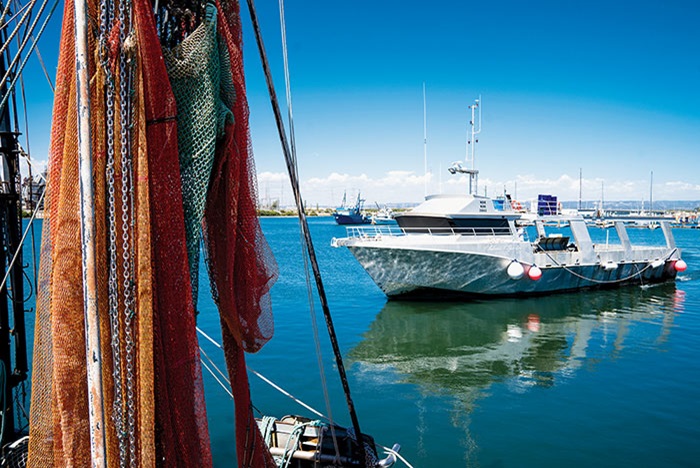 In the meantime, he continued to pursue alternatives to diesel motors and became involved with FRDC’s entrepreneurial program, Fish-X: “That really clarified the way we needed to proceed. We interviewed a lot of fishers, looking at barriers to people changing or upgrading their vessels with technology such as hybrid propulsion and the common feedback was, ‘sounds good, but I can’t risk being the first to try’.

“It became apparent that we needed a boat in the water proving, for all to see, what was possible and what could be achieved.

“This was the main lesson to come out of Fish-X … that we needed to show, not tell.”

Dennis Holder started working with Oceantech Design in Adelaide to begin building a sister ship to Silver Spectre, but with one clear difference. It will be diesel–electric. The plan is to have two similarly equipped working boats so that anyone in Australia will be able to look at the costs of the conventional diesel boat and the costs of the diesel–electric and judge accordingly.

In his own business, based on what he has already observed, Dennis Holder is anticipating the diesel–electric will eliminate 80 per cent of his diesel consumption and about 80 per cent of repair and maintenance costs – a substantial amount of money.

For the sister ship to match the Silver Spectre’s 880 kilowatts of power in the propeller he is looking at a 360-kilowatt diesel–electric set-up plus 600 kilowatt-hours of battery storage. The batteries would provide enough power for 10 operating hours pulling crab pots.

“Basically you head out in the morning, charging the batteries. Once you are on your fishing gear the diesel generator will be shut down and you’ll be operating on batteries only, although we plan to supplement this with solar generation on the boat’s roof.

“Our initial calculations suggest we can generate about 15 per cent of power needs on the boat, and the rest to come from the batteries, however the final battery and generating set-up
will be determined once we’ve calculated all of the power requirements for machinery, refrigeration, lights, and the boat’s electronics.”

The budget for the prototype vessel is $3.5 million, for which Dennis Holder will seek funding from his bank, NAB Agribusiness, through its Greening Fund. He says the bank has been quite open in its enthusiasm to finance the first such commercial fishing vessel in Australia.

In an article in The Guardian newspaper reporting on Dennis Holder’s time on the Norwegian electric-powered fishing vessel, NAB’s Head of Agribusiness South Australia and Western Australia, Matt O’Dea, described Dennis and Karen Holder as pioneers in sustainability.

He expressed the bank’s support for “the courageous ideas” that will create a more sustainable industry.

The diesel-electric sister ship will cost about 30 per cent more to build than a conventional diesel-powered boat, but Dennis Holder says he is working with an electrical design engineer on ways to reduce this differential because overlaying all of this is his burning ambition to showcase a modern, sophisticated industry that is embracing new technology, including technologies that reduce its environmental footprint.

Dennis Holder says he is optimistic because he senses the industry has already turned a corner. “There is a building optimism, partially driven by the television food culture which has driven home the message about knowing where your food comes from, and partially by an awareness that the recreational fishing sector must be accountable for its effort and catch rather than only having leisure activity as a benefit.

“When these two influences are combined, more and more commercial fishers can see a light at the end of the tunnel and are now worrying less and less that it’s an oncoming train.

“I think we are on the way back to again being a respected group as fishers in society, doing what we love to do – providing a high-quality protein to consumers – which remains a service the world will always need.