Gloria Jones and her daughter Christine Jackson are at the forefront of environmental and industry advances, and paving the way for women in fishing Australia-wide to be heard 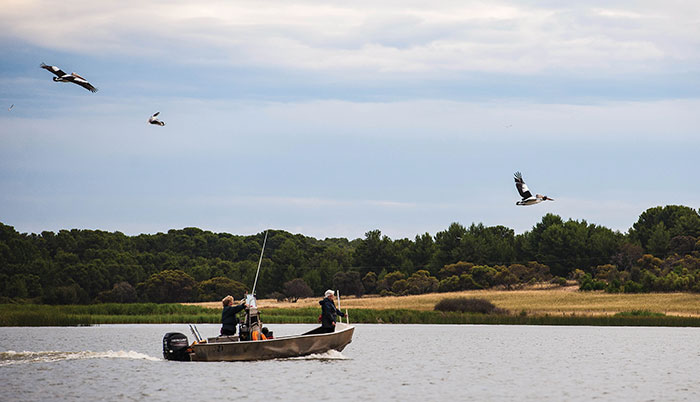 Gloria Jones was 19 years old when she moved with her fourth-generation fisher husband, Henry, to a remote outpost on the banks of South Australia’s Lake Alexandrina at the Murray River mouth. Clayton Bay was home to only one other couple at that time and “a bloke in a cave”.

It was 1962 and the only access to their home was a dirt road that bogged cars with sand in summer and mud in winter. There was also no power or telephone. But a lack of services did not stop the newlyweds from wholeheartedly embracing their new roles as owner–operators in the Lakes and Coorong Fishery.

There was never any doubt, Gloria Jones says, that she would join her husband on the water despite having no fishing experience. She was more than just a companion, thriving as a fisher, working the nets and gutting and packing fish every day. “Henry was the love of my life so wherever he went I went,” she says.

It was not until their third child was born that she rested her sea legs. And even with young children at her heels, Gloria Jones remained hands-on in business: running a retail fish shop they built alongside their house, expanding it into a bustling mixed business and then a popular restaurant, Yabby City. It featured their own produce and there were queues down the street, despite the location at the end of an unmade road.

“There was yabby soup, yabby cocktail, garlic yabbies, curried yabbies and people just loved them,” says Gloria Jones, who combined her career as a fisher, restaurateur and retailer with a school bus run and as an activist for the environment and women’s representation in the industry.

In 2011 her efforts were recognised when she became the first woman inducted into the National Seafood Industry Hall of Fame.

But life was not easy for the young couple in their first few years in the Lakes and Coorong. They would rise before 3 am, working under the glow of kerosene lamps to pack wooden boxes of fish insulated with ice and newspaper. Boxes were nailed shut before being loaded onto the back of their truck for the bumpy 15-kilometre journey to the Finniss station to meet the 8.30am train.

“The roads were extremely bad and we had to take shovels and bits of wood in case we got bogged on the way,” Gloria Jones says.

But despite the trying conditions, she says the pristine environment of her beautiful new hometown captivated her. “When we pushed off from the shore each morning we travelled into a wilderness of birds and fish and animals and a very healthy aquatic system,” she says.

This early experience is behind the Jones family’s efforts to protect the environmental sustainability and credentials of the fishery.

“We believed it wasn’t right that children who had not experienced this Lakes and Coorong wonderland were going to accept dying ecosystems as the norm,” Gloria Jones says. “And that is the reason we would fight so hard for the Murray–Darling system.”

Through the 2000s, Gloria and Henry Jones (who died in 2014) took their fight to Canberra, and were instrumental forces in protecting the health of the Murray River along its entirety through the development of the historic Murray–Darling Basin Plan. Their work helped to secure adequate water flows to sustain the Lower Lakes and Coorong against competing interests.

Gloria and Henry Jones’s dedication and passion has inspired their daughter Christine Jackson to continue the fight for water through the Murray–Darling Basin system with her mother, who says water allocation remains the most critical issue for the fishery’s future.

The campaigning is sometimes exhausting, Christine Jackson says, but well worth it to sustain flows down to the river mouth.

The flows issue first hit home when she returned to the Clayton Bay area in 2005, after five years away, and witnessed the system’s degradation at the height of the Millennium drought. “We couldn’t even get the boats into the water at that stage,” she says. “There was no water where we were.”

She says living through the drought highlighted the importance of ensuring that strong environmental policy around the fishery was in place to ensure its long-term viability – especially once the water returned.

This is one of the reasons the 38 families of the fishery, led by Gloria and Henry Jones among others, worked to get Marine Stewardship Council certification; in 2008 it became the world’s first multi-species multi-method fishery to receive the coveted certificate.

While there were several administrative hoops to jump through, including an ongoing annual audit, Gloria Jones says certification proved “a natural progression” thanks to the practices already in place under an environmental management plan established at Henry’s suggestion and backed by other fishers and scientists as far back as 1996.

“We really haven’t had to make any changes to our operations – we’ve just had to get better at doing the paperwork,” she says.

And paperwork, she says, is what many women in the fishing industry are best at. In fact, if it was not for female partners managing the accounts many fishing businesses would not survive, she says.

Gloria Jones realised that while women were often half of a fishing team, cleaning and mending gear, taking orders, doing book work and generally keeping the business going, they were seldom involved in policy or decision-making. It is what led her efforts, along with those of June Gill and Charmain Wait, to establish the Women’s Industry Network in South Australia in 1996.

The idea to unearth talent and hone skills through media and leadership workshops and networking was a great success, and two years later, with funding and support from the FRDC, it went national with the Women’s Industry Network Seafood Community (WINSC).

This year, WINSC turns 20 and Gloria Jones, who has served as both its secretary and president, says it has transformed the role of women in Australia’s fishing industry.

“We wanted women to be able to speak on behalf of their fisheries to the media and politicians and now there are many women making policy and decisions for our industry,” she says. “And many friendships have also been formed through our group.”

As well as figuring in fishery policy and businesses, women play a vital role in the survival of fisheries by providing the social licence that supports a fishery’s existence, Christine Jackson says.  “A fisher is not just a bloke with a beanie and a boat,” she says. “They have a family and communities know the value of fishing families in their area, keeping schools and hospitals and activities such as ballet and football going,” she says.

Christine Jackson now runs the family’s fishing business in Lake Alexandrina and Lake Albert, the Coorong and three nautical miles offshore. Her own two grown daughters work in the area teaching swimming and in the local school, while one of her nephews works alongside her on the water. Her husband, who flies in and out of the Pilbara, Western Australia, for his job is also “put to work” when he is home. “Anyone who is standing around gets a job,” she says. Gloria Jones, who has just turned 75, also cannot keep away from the business, still packing fish and overseeing a raft of changes, from the new facilities to state-of-the-art equipment and systems, which have cut costs, saved time and provide optimum-quality fish to customers.

“I’ve made lots of lovely friends, we’ve had lots of fun and I’ve loved every minute of it,” Gloria Jones says of her lifetime in the fishing industry. “It was a hard slog, but I can tell you, what a ride!”