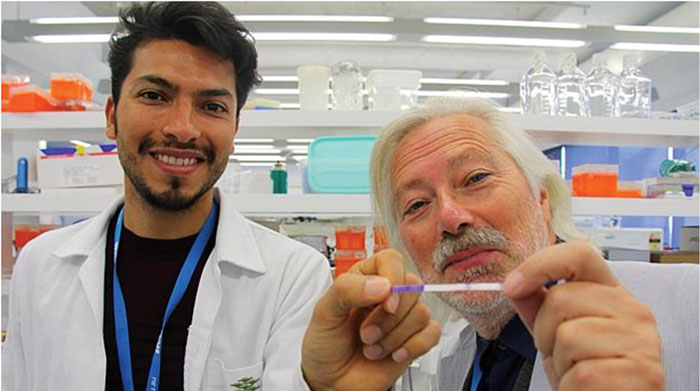 An internationally validated test kit that can identify the presence of paralytic shellfish toxins (PSTs) in seafood will be a crucial tool in helping Australia’s aquaculture and wild-harvest operators manage the risk of toxic algal blooms.

The kit is just one tool in a suite of new monitoring and management strategies designed to protect food safety and the reputation of Australian seafood.

Algal blooms that produce the potentially deadly PSTs have affected most Australian states intermittently over the years. However, the toxic Alexandrium tamarense (Group 1) has appeared repeatedly in Tasmania since 2012, when the state experienced its first major bloom of the species on the east coast.

Farmed bivalve shellfish including mussels and Pacific Oysters, as well as wild populations of rock lobsters and abalone, have all been found to accumulate the PSTs. After ingesting the algae, each species eliminates the accompanying toxins at varying rates. As filter feeders, shellfish quickly accumulate the toxins and quickly eliminate them once blooms have passed. Other species are slower in their responses.

The more recent emergence in Tasmania of a strain of A. tamarense that produces highly concentrated toxins has added further impetus to the development of new monitoring and management strategies.

Last year, Tasmanian testing recorded the highest ever level of toxins in shellfish generated by blooms of the new A. tamarense strain, in conjunction with high algal counts.

Blooms occurred along the east coast, persisting in the south-east in particular for several months through spring and into early summer at specific sites. This caused some waters to be closed for shellfish harvesting for up to 17 weeks during what is historically the busiest time for industry, until the bloom abated and the shellfish flesh from the area was declared clear of toxins by official laboratory testing.

The manager of Australia’s SafeFish program, Alison Turnbull, says PSTs are a massive business and reputational risk for the Australian seafood sector and have already caused many domestic and international product recalls in the past five years.

Funded by the FRDC, SafeFish conducts and coordinates food safety and trade-related research for the seafood industry, based at the South Australian Research and Development Institute (SARDI).
Alison Turnbull says weekly water sampling and analysis for algal cell counts were previously the first line of defence and the main trigger for further testing of PST levels in shellfish flesh.

“With our previous toxic species it would take 5000 to 50,000 cells per litre in water samples before we would get toxins in the shellfish. But with this species we’re getting toxins in the shellfish with cell counts of only 2000 to 3000 cells per litre. We’re only just starting to detect the algae, and we’re already over the toxin limit,” she says.

This shift has led to a new focus on proactive and more frequent sampling of seafood itself.

In 2015, the FRDC funded Gustaaf Hallegraeff, Juan Dorantes-Aranda and Sarah Ugalde of the Institute for Marine and Antarctic Studies (IMAS) at the University of Tasmania to research which of the four commercially available PST kits was most reliable in identifying the PSTs produced by algae in Australian waters.

The Neogen™ PST kit was found to be highly accurate for Pacific Oysters, providing positive results for target toxins in oyster meat at 50 to 100 per cent of the regulatory level. It also identifies PSTs in mussels at much lower levels, potentially triggering formal testing and harvest concerns even when PSTs are well below the regulatory limit. This sensitivity could limit its use for this species as a potential pre-emptive decision-making tool for growers.

The Neogen™ test kit unpacked and ready for use.

Following this work, SafeFish obtained a grant from the Australian Department of Agriculture and Water Resources (DAWR) Package Assisting Small Exporters that has allowed SARDI and IMAS to validate the Neogen™ kit internationally – an important step in improving confidence in testing protocols for trade partners.

A second SafeFish–DAWR grant is also funding workshops for oyster growers, the first of which was held in January 2018, providing training and accreditation in the use of the Neogen™ kit.

Among those at the workshop was Hayden Dyke, who operates Oyster Bay Oysters at Little Swanport on the Tasmanian east coast.

He has been using the Neogen™ kit since 2015, when it was first introduced to industry. He admits to some early errors with the kits, and says the testing process is very time critical – down to the second – which is why the January workshop to standardise protocols has been essential.

“It’s an incredibly useful tool in conjunction with all the other data to gauge the level of risk. Without something like this you’re flying blind,” he says. “It allows me to make decisions about whether I will continue to harvest, particularly as a bloom is beginning or starting to decline.”

He combines the PST testing of oyster meat with algal cell counts, algal species and toxin identification, and water temperature monitoring. A. tamarense is a cold-water, winter-blooming species, so when ocean temperatures reach 14ºC to 15ºC it is too warm for the algae to survive.

“The regulatory environment is changing quickly to respond, and new testing methodologies are being developed in the laboratory, all of which gives me confidence that we can continue to operate and ensure food safety,” Hayden Dyke says.

Although other states have not been as affected by PST algal blooms as Tasmania has, as a member of the Australian Shellfish Quality Assurance Program, Hayden Dyke says there has been increase in awareness of and surveillance for algae and their toxins in shellfish around the country.

The potential human health effects of ingesting the toxins are significant, ranging from slight nausea through to death. The secondary financial and reputational effects are also significant for specific growers or producers affected, given the time and costs involved in a recall process.

There is also the potential for further long-term damage to the brand of the producer, the state and national brand, and for the image of seafood as a whole.

Oysters Tasmania executive officer Sue Grau says the organisation is now working with government to incorporate the kit as part of the official regulatory testing regime.

“Waters that have been closed to harvesting require two ‘compliant’ PST results a week apart to allow harvesting to resume. Currently, these are both laboratory tests. But it may be possible to use the Neogen™ tests for one of these ‘compliant’ results, with a laboratory test providing follow-up confirmation a week later.”

It is a discussion in progress, Sue Grau says. Meanwhile, growers are already using the kits to make management decisions, which include the potential to suspend harvest even before waters are officially closed. Often one grower in each harvest area does the sampling, providing all other growers in that area with advice about the results.

The Tasmanian Government’s recent $1.2 million upgrade of the Analytical Services Tasmania laboratory in Hobart, which was officially opened in December 2017, has already begun to improve the timeliness of formal testing.

It provides results in two days, rather than the four or five days it takes when samples are sent to Sydney. As this allows testing twice a week, the shellfish industry has benefited by having closure times reduced in some instances. The initial focus is on oysters and mussels, but testing is also expected to benefit other potentially affected industries, including rock lobster, Abalone, Scallop and clams, as well as recreational fishing for these species.

As executive officer of the Tasmanian Rock Lobster Fisherman’s Association (TRLFA), John Sansom has already made use of the new Hobart capabilities, sending off mussel meat for testing in early January.

The TRLFA uses mussels as a sentinel species to detect toxic algae in areas where there is no regular water sampling by mussel or oyster growers. There are eight sentinel sites along the Tasmanian east coast, maintained by the TRLFA as part of the industry’s Biotoxin Management Plan, established in 2014 in the wake of the first major PST algal outbreak.

John Sansom says Southern Rock Lobsters are slower to take in the PSTs than shellfish, and the toxins accumulate in the hepatopancreas (the equivalent of a liver). They are also slower to depurate themselves of the toxins.

While the rock lobster flesh is not affected, another FRDC research project found that 15 to 20 per cent of recreational fishers and a similar proportion of Chinese consumers eat the hepatopancreas of rock lobsters, putting them at risk.

John Sansom says rock lobster fishers are often better placed than shellfish growers when a bloom does occur, in that they “have boat, will travel”.

“But we need to be conservative in closing waters, as much as that might make it difficult for some fishers. We have to look after our product, we cannot take the risk of putting rock lobsters onto the market that are not safe to eat.”

He says a PST test kit for rock lobsters, similar to the one being used for oysters, would go a long way to helping fishers actively monitor and manage this risk.

Alison Turnbull says there is still more to learn about the algae itself. “We know it forms cysts (enclosing itself in a membrane) when it dies, but we are not sure if the blooms are recurring because of the cysts sinking and getting trapped, or whether it is coming in again on the ocean currents.

“Last year was also the first year we’ve seen abalone on the east coast actually test positive above regulatory limits, although we’re not entirely sure how they are accumulating the toxins – through feeding or directly through the foot.”

She says there is also more to learn about how PSTs actually affect the health and growth of animals, with Southern Rock Lobsters of particular interest. She says some experimental work suggests rock lobsters reduce their feeding, which may have implications for growth rates and harvest management.

“There have been some major gains in management since 2012 and it’s improving every year. We’re developing new tools and new ways of thinking; the whole industry is being proactive,” she says.

What is paralytic shellfish poisoning?

Algae are consumed by shellfish including mussels, oysters, clams, pipis, scallops, abalone, rock lobsters and crabs. The toxins build up in their flesh or organs and can be dangerous to humans when eaten.

What are the symptoms?

Symptoms of PSP begin within minutes or up to 24 hours after eating shellfish.

Initial symptoms include tingling and numbness around the mouth, these sensations can spread to the face, neck, arms and legs.

There have been no deaths reported in Australia as a result of PSP. However, there have been multiple hospitalisations over the past decade and anecdotal reports of people whose limbs have been partially paralysed for short periods.