While fishers are proud producers of an essential food, research is identifying new processes that have the potential to increase marketability and bring more of the local harvest to our tables

Emerging food and processing technologies, along with the adaptation of existing processes, suggest new ways that Australia’s seafood sector can make more of its catch and reduce waste.

Collating these figures and identifying potential opportunities has been the focus of the FRDC-funded post-harvest research program, which includes several projects led by Janet Howieson at Curtin University in Western Australia.

The ‘unfished’ allocations represent more than the total wild-harvest catch from New South Wales and Victoria combined. But part of the challenge in bringing this catch home is that the unharvested fish are not all the same species, and they are not all in one place waiting to be caught. Additionally, some of these species only occur in very small numbers, making fishing efficiencies very difficult to achieve.

Janet Howieson has identified 107 underutilised species, which are scattered around Australia’s 36,000-kilometre coastline. 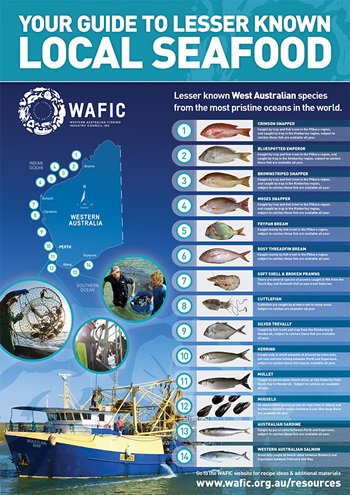 The poster produced by WAFIC: Efforts towards making more of underutilised species and increasing returns for fishers include improving handling protocols and raising the profile of these species in the marketplace.

The review (completed in 2016) focused on species where less than half of the allowable catch was actually harvested, or the value of the catch was less than $6 per kilogram. That is a potential value of about $150 million to the national economy at that time, or more if prices could be increased.

Advice from seafood marketing experts prioritised 42 species from the initial list as ‘commodity’ for high-volume export, or ‘premium’ for lower-volume domestic consumption.

In some cases, the fresh fish market has taken up the challenge to raise the profile of species. Pilbara-region finfish including Bluespotted Emperor, Frypan Bream and some Tropical Snappers have increased their profile, partially as a result of the research project, and have been enjoying broader support from consumers.

In an aligned sub-project the Western Australian Fishing Industry Council (WAFIC) produced an education package about the underutilised species with posters, recipe cards and lessons for school students.

Janet Howieson’s work on Western Australian Salmon (unrelated to Atlantic Salmon) has meanwhile highlighted both potential opportunities and barriers. The species is generally beach-seined, with a relatively short harvest season. As a case study for the underutilised species research, best-practice handling procedures to preserve the flesh quality and flavour of the fish were developed.

New products trialled from fish harvested this way included canned fish, smoked fish, fish in oil, fish burgers and premium pet foods, as well as premium fresh fish for export and for domestic restaurants. Well-known WA chef Peter Manifis generated interest in the species at several local restaurants. However, due to the short season it was difficult for fishers to maintain supply of quality fish to sustain the interest.

These logistical issues are shared by many other similar fisheries.

Offshore harvesting and processing, including freezing – not a current practice – might also be considered to provide a longer harvest and supply period and consistently higher quality fish. Currently, there may not be enough regional freezer capacity to hold all the harvested fish, should much larger amounts be landed, Janet Howieson says.

In developing new products from waste and underutilised species, the research team has tapped into the considerable expertise and specialised equipment of the broader food-processing sector around Australia, including private operators and other research groups such as CSIRO. The aim has been to develop ‘investment-ready’ seafood opportunities.

Janet Howieson says some of the technologies trialled to add value, such as hydrolysis or high-pressure pasteurisation, could be applied equally across fresh seafood and waste streams.

“However, despite good outcomes from the product development phase of the trials, there are often practical or cultural barriers that limit the commercialisation of new products and markets,” she says.

Distances between harvesting, processing and markets as well as species diversity are among the major issues to overcome in making more of both underutilised species and processing waste.

Volatility within the fishing sector also plays a role, with short seasons for harvesting and limited regional infrastructure for processing and storage. Fluctuating prices and seasonal conditions may also lead fishers to chase the highest price available in the moment, instead of uncertain and potentially lower longer-term returns from new products. Maintaining a consistent, commercially viable supply of quality raw material is one of the greatest barriers to commercial success.

“It can be difficult for smaller fishers or seafood processors to initiate the changes needed, to secure finance and to develop feasible marketing and distribution requirements. And even where we develop new processes, or tailor applications for a specific species, and provide proof of concept, success depends on having the commitment of the harvest industry, as well as whole-of-supply-chain commitment, including logistics, distribution and marketing channels,” Janet Howieson says.

She says future research in this area may fall within the scope of the proposed Fight Food Waste and Fraud Cooperative Research Centre (CRC), which has made a bid for federal funding. The FRDC is a major supporter of the CRC bid, and an announcement is expected in March.

See also: 'A guide to seafood value-adding technologies' (in this issue of FISH)