A guide to seafood value-adding technologies 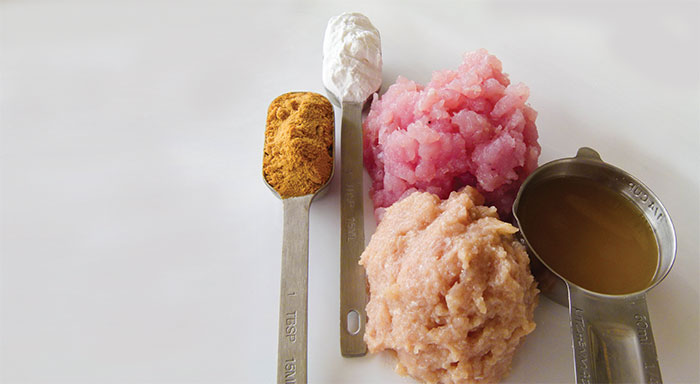 Ingredients used to create a high-value retail product from recovered fish protein that would normally be discarded as waste.
Photo: Andrew Molyneux

(from left of photo)

Processing technologies standard in other food sectors are now being adapted and trialled for the seafood sector through a range of FRDC post-harvest and waste-prevention research projects. Fishers and processors are encouraged to consider whether trialled technologies might have applications that could improve the value or reduce the costs of their products.

Handling protocols that preserve the quality of seafood have the potential to take a product that would otherwise be rejected, raise the price and put it on the ‘preferred’ or ‘premium’ buying list. Harvesting processes, including killing techniques, the use of sanitisers to control spoilage bacteria following harvest, and consistent, best-practice cold-chain logistics, all influence flesh quality and shelf life. Improved protocols to lift quality have been developed for Australian Salmon, Australian Sardines, pearl oyster meat and a variety of finfish from the Pilbara region.

Paspaley Pearls is among the companies that has implemented improved handling protocols to ensure pearl meat, previously considered simply a byproduct of pearling, is handled to meet food safety standards, including export standards, with new premium value-added products expected to be launched in 2018.

Injection technology is widely used in other food industries, often for applications such as infusing meats with marinades. In the case of seafood, Janet Howieson has worked with Australia Bay Seafoods as a seafood supplier and Catalano’s Seafood as a processor to adapt injection technology specifically for Saddletail Snapper.

The aim has been to stabilise flesh quality and address a ‘tough texture’ issue that plagues the fish, and which only becomes evident when the fish is cooked. The new injection process appears to provide a consistent eating quality in all fish, improving marketability of the species.

Acids and enzymes have both been used in seafood trials to break down larger protein molecules into smaller components, generally to turn a ‘waste’ product into something more useful, or enable it to be disposed of more effectively. In the Curtin University research program, enzymes have been the preferred catalyst, because they provide more consistent end products.

In one food-related project an enzyme-based process was able to convert second-grade mussels into a potentially marketable mussel stock product.

In another waste treatment project, the South Australian fish processor SAMPI was able to move from an acid-based hydrolysis process to a faster enzyme process that also produces a higher quality liquid product. Saleable products from the process include soil conditioner, aquafeed ingredients and fishing berley.

A small enzyme hydrolysis unit has also been developed, capable of breaking down up to 50 kilograms of mixed-species seafood waste, with the final hydrolysed product suitable as a liquid fertiliser. Trials of the unit are still underway, with some modifications being made, but this could offer small seafood businesses and fishmongers an alternative to landfill for their waste.

The hydrolysis process allows specific chemical components to be extracted for further testing of functional properties. This has been the case for cold-tolerant enzymes extracted from hydrolysed Patagonian Toothfish heads, provided by Austral Fisheries. A multinational detergent manufacturer is now looking at the functionality of the extracted enzymes for use in cold-water washing detergents.

Operating at temperatures of 15°C to 20°C, this process uses pressure at increasing rates to achieve different end results. For the seafood sector, three different applications have been identified: the easy shucking of shellfish, meat extraction and extended shelf life.

In trials with Fresh Produce Alliance, a private operator at Manjimup in Western Australia, packaged seafood – both raw and cooked – was processed under high pressures in cycles of two to 10 minutes. High pressure proved a viable option for the easy shucking of seafood, particularly oysters and abalone. Pressure at 250 to 350 pounds per square inch breaks the muscle that holds the animals to their shells. When the oysters or abalone are unpacked, the meat simply slides out of the shell – no knives required.

A preliminary trial provided reasonable meat extraction of intact portions of raw meat from the claws of Champagne Crab. This could improve the meat recovery and marketability of the species, which can be difficult to handle because of its small spines and hairs.

Higher pressures of up to 650 pounds per square inch effectively kill most organisms present in the meat, and this process was able to extend the shelf life of cooked crabmeat from five days to four weeks. A chilled, packaged, cooked crabmeat product with an extended shelf life was developed using this process and it was a finalist in the 2017 Delicious Produce Awards, with further trials and commercial production proposed in 2018.

The trials did show that high-pressure pasteurisation may affect texture, colour and other sensory properties so individual detailed product development is needed to optimise opportunities from this technology.

Fillet recovery rates for finfish vary from 30 to 50 per cent. However, mechanical meat separation technologies applied to filleted fish frames and other seafood ‘waste’ has recovered more than 20 per cent of the protein from the waste portions.

Trials used a drum separator with sieves ranging from two to 10 millimetres to produce mince of varying grades and ‘chunkiness’ from a variety of finfish, which could then be used to create new products such as fish cakes or croquettes, or potentially for use in high-temperature extruded products (see below).

A successful variation of this technology has also been applied to crustaceans, where a finer mince of low-value Coral Prawns was mixed with larger ‘chunks’ of King Prawns to produce King Prawn cakes, which were sold in local supermarkets. (Production was suspended when prices for all local prawns increased following the White Spot Disease outbreak in Queensland and a ban on imported prawns.) Screw press technology was also trialled and improved the texture of cooked and thawed seafood meat. It effectively squeezes the water from the flesh, which enhances the flavour and texture of the meat for use in other products.

Once seafood protein has been extracted from processed frames, a variety of technologies can be used to reform it into useable portions.

Commonly used in meat processing, cold-set binding allows for the ‘restructuring’ of raw meat proteins into portions that can be cooked and used in similar ways to fresh cuts of meat. Preliminary trials with CSIRO, later modified in trials at commercial food processing facilities, identified alginate products that provide an effective ‘glue’ to bind seafood mince recovered from fish waste into useable portions that could be ‘sliced and diced’. Crumbing portions was found to further protect the flavour and texture of the final product when thawed from frozen, which otherwise deteriorated. Further work is required to optimise the final product.

Extrusion technology is widely used in the food sector, creating products that range from breakfast cereals to pet foods. Raw ingredients are shaped as they are cooked at temperatures of 100°C or more.

In trials with CSIRO, finfish and crabmeat were processed at up to 120°C. The major challenge to be overcome was the high moisture content of seafood – initially about 80 per cent, with a requirement of 70 per cent or more in the final product.

The best result came from a trial using a mix of ‘waste’ fish protein that had been recovered through improved separation processes, which was then pureed and pre-mixed with other dry proteins to produce a seafood cake. The final moisture content was 75 per cent and the end product achieved both a good texture and flavour.

While more work is needed to refine the application of extrusion processes for seafood, the trials demonstrated that different ways of mixing and cooling were likely to solve the production challenges.
Surimi. While the recent research project did not trial surimi processing, one seafood company did send samples of reclaimed protein overseas for testing.

The commercial process for creating surimi was developed in Japan in the 1960s, but is based on almost 1000 years of traditional practice. It was originally a way to save unused fish by salting it and grinding it to a gel.

The modern surimi process is more complicated and uses sugar in gel formation to increase shelf life. It is now manufactured around the world, with products including fishcakes and crabsticks.