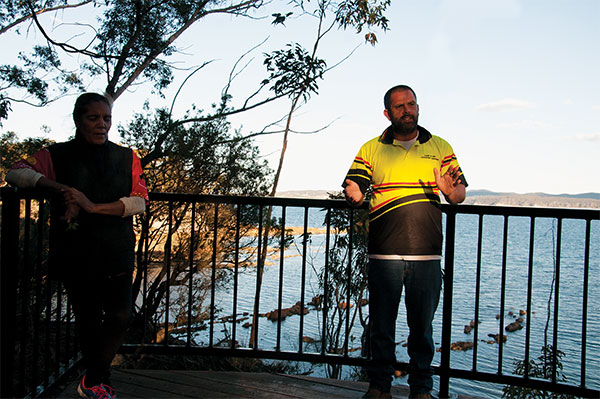 Les Kosez from the Eden Local Aboriginal Land Council tells stories of the area’s history and future on the tours he leads.
Photos: Melissa Marino

There is a story that Yuin man Les Kosez likes to tell about Jandas (Orcas) and how, in the past, they worked with local Aboriginal people “like cattle dogs” to herd Baleen whales into the deep and protected Twofold Bay on the NSW south coast, until they beached themselves, becoming easy pickings for fishers.

Traditional culture says the Jandas were warriors reincarnated, which is why they were clever and brave enough to help the fishers. Oral stories passed from generation to generation tell that the Jandas were so smart they would even approach the shoreline and slap the water, alerting fishers when Baleen whales were in the area.

This was not a one-sided arrangement – there was something in it for the Jandas, too. “Out of respect they were allowed first pickings and they would go for the tongue and the lips and then the people would utilise the rest of the carcass,” says Les Kosez, who is acting CEO of the Eden Local Aboriginal Land Council.

This is just one of the insights he shares on the guided tours he leads along the Bundian Way Story Trail, a recently rehabilitated traditional Aboriginal walking track on the NSW south coast. The 1.6-kilometre track, of “moderate” difficulty, hugs the coast from Eden’s Cocora Beach to Quarantine Bay and represents just a small fraction of the original Bundian Way.

Eventually, the entire 350 kilometres of the Bundian Way, which extends to the highlands of Targangal (Mount Kosciuszko), will be restored and open to bushwalkers. The coastal area was the first focus because of the clear economic and social benefits it could bring from tourism and use of local labour and materials. 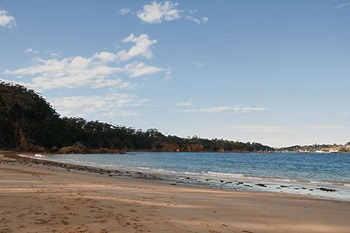 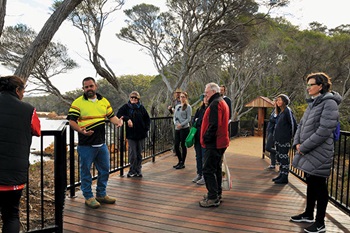 Les Kosez from the Eden Local Aboriginal Land Council tells stories of the area’s history and future on the tours he leads. 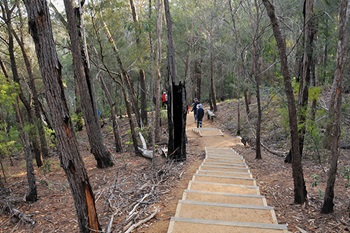 The Bundian Way Story Trail – an ancient pathway along the NSW south coast rehabilitated by young people working with the Eden Local Aboriginal Land Council. It features lookouts, bridges and steps made from local materials.

The project has employed local people, with several young Yuin men, who had been struggling to find a job, working on the trail’s restoration. This has given the young work crew an income and skills as well as knowledge about their culture and a sense of pride in it, Les Kosez says.

As they worked on the trail they discovered the stories of their people, which has empowered them, he says, and will allow them to pass on knowledge themselves as their culture evolves.

The Yuin people’s connection with fishing and the sea, he says, is evident through their relationship with the Jandas and the area’s natural and sustaining wealth of aquatic life, including a variety of fish, abalone, mussels, pipis, periwinkles and oysters. There is also evidence of seafood cultivation by indigenous people.

“You’ve heard of fish traps – well there is some consideration to the possibility that estuaries have been modified for the purpose of cultivation and different aquacultural practices,” he says. “You’d be surprised at the level of manipulation that Aboriginal people engaged in with aquaculture, agriculture and even animal husbandry.”

The Eden Local Aboriginal Land Council is also working with other local organisations and oyster farmers to lend its expertise to biosecurity and environmental programs.

This includes helping the oyster industry to prevent Pacific Oyster Mortality Syndrome (POMS) in the area by helping destroy outbreaks of pest Pacific Oysters that could host infection.  Les Kosez says they take the lead from oyster farmers who know the estuary best, and help them to destroy infected oysters.

They also work with oyster farmers and South East Local Land Services to stabilise eroding estuary banks, using coir logs made from coconut fibre and mesh filled with old oyster shells. This transforms the shells, often viewed as waste, into an environmental benefit.

This work further builds the connection and understanding crew members have of their traditional country and ensures they have a continuing, active role in the community – a community shared between Aboriginal and non-Aboriginal Australians, Les Kosez says.

“One of the big things we like to talk about with the Bundian Way is that it’s a way to describe the shared history,” he says. “If you consider yourself Australian in contemporary Australia then Aboriginal culture and the European culture and the entire history of the nation should be just as important to you whether you are black, white or brindle.”