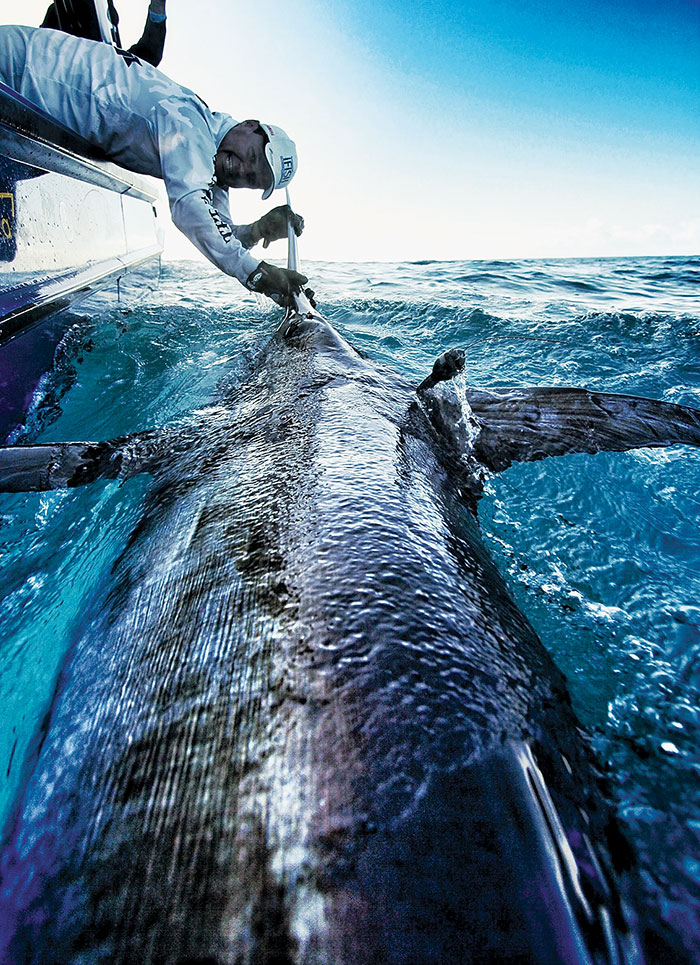 If there is a holy grail of recreational fishing, it’s the Swordfish. Anglers talk about it in almost mythical terms: the unicorn of the sea, the Mount Everest of angling, the ultimate test of man versus (marine) beast. Even its scientific name – Xiphias gladius – translates from ancient Greek and Latin as ‘sword sword’.

Until recently, the Swordfish was thought to be all but out of reach for recreational fishers in Australia. One or two may have been hooked through sheer luck, but no amount of persistence was able to coax this elusive creature out from the depths.

But anglers finally appear to have ‘cracked the code’, and a recreational Swordfish fishery is growing around Tasmania and off the south-east coast of Australia. The numbers are still minuscule compared with commercial catch of Swordfish, but it is putting Australia on the recreational fishing map for the species.

While apex predators such as Swordfish make an attractive hunting target, there is always the conundrum of whether these magnificent creatures are killed as part of the hunt or whether they should be released safely after capture.

“It’s been very controversial, with the general public but also within the recreational sector as well, about whether these fish should be being retained and weighed – that trophy concept – versus being released,” says Sean Tracey, a researcher at the University of Tasmania.

Marlin – another big game fish – is treated as a catch-and-release fishery. One of the main differences here is that Marlin are not considered to be good eating, whereas Swordfish are highly sought after for the dinner table.

Declaring that all Swordfish caught by recreational fishers should be released is not so simple when it comes to the animals’ welfare either.

Catching a Swordfish is a marathon effort both for the fisher and the fish. In some cases, a larger fish can fight on the line for several hours. By the end of that, the fish can be exhausted. The fish might also be suffering barotrauma – the damage done by expanding gases in the fish’s body as it is brought up from as much as half a kilometre below the sea surface.

Sean Tracey has set out to explore just what happens to Swordfish after they are caught and released, using satellite tags that collect data on a fish’s movements for up to 250 days after capture.

The tags, which are attached to the muscle near the fish’s dorsal fin, record information such as water temperature, depth and light intensity on a daily basis. If the fish survives the tag remains attached for up to 250 days then automatically detaches and is brought to the surface by an in-built flotation device. From there, it transmits its data via satellite.

The tag is able to detect if the fish has died – for example, if the tag records that it has stayed at the same depth for several days in a row, whether that be the surface or the sea floor – and will then automatically detach, float to the surface, and send back the data it has recorded.

“The primary point of the project is using satellite tags to determine, once the fish has been caught by a recreational fisher and then released, whether they actually survive,” Sean Tracey says. 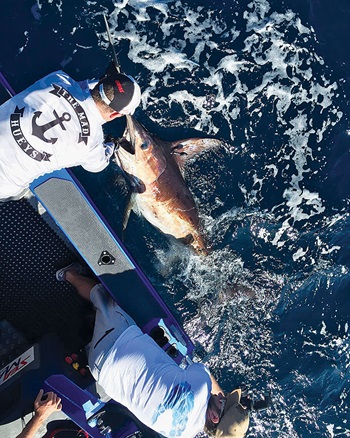 “The benefit of using the tag, for the ones that do survive, is that we get a lot of information on the movements and behaviour of the animal for a long period of time as well,” he says.

The pilot project, which has so far deployed eight of the 10 satellite tags, is already delivering a treasure-trove of data on the movements of these fish, some of which can weigh more than 300 kilograms.

For example, there has long been debate over whether the Swordfish actually reside year round in the cooler waters around Australia’s southern coastline, or whether they are simply migrating down from the Coral Sea, where the main Swordfish populations are found and where the commercial fishery plies its trade.

The satellite tag data showed that some of these southern-caught Swordfish were travelling huge distances up and down eastern Australia – in one case, as far north as the Solomon Islands. One fish even travelled up to the mid-north coast of Queensland and then journeyed back down to Tasmania.

“It would suggest the there’s something bringing them back down here – it’s not just that they’ve ventured down here and got lost,” Sean Tracey says.

There was also the suggestion that some of the smaller fish were hanging around the NSW and Victorian coast, rather than returning up north.

“That may be related to the fact that the ones that did travel back up north were quite large fish and likely to be spawning fish, and spawning is known to occur in the Coral Sea.”

But more importantly, Sean Tracey’s research suggests that a blanket catch-and-release policy is not necessarily the best approach.

While many of the Swordfish caught and tagged so far appear to have survived the experience, Sean Tracey points out there were some fish that the team decided not to tag because they could see from the fish’s physical state that it was unlikely to survive.

“We’ve got a series of things we observe, like an Apgar test with a baby; we do the same thing with the fish to determine whether it’s in good condition,” Sean Tracey says. When the fish is brought to the boat, the tag is put in, then the fish is ‘resuscitated’, which involves moving the boat slowly forward while the fish is held alongside, allowing water to flow over its gills as it rests – a common practice for many large pelagic species prior to release.

Once this is done for a period of time, the researchers do another assessment to see if its condition has improved enough to release it.

“Generally we’re doing everything we can to release them, because that’s the objective of the project, but we have had some that have died prior to release,” he says. This makes for a more complicated scenario than a simple catch-and-release: it is likely to require recreational fishers to complete an assessment of the fish’s physical state before deciding whether to release it.

A fish released when it was unlikely to survive would be a waste and a poor outcome. A better outcome, if the fish is in poor condition, would be to quickly and humanely dispatch it, and ice it down so the meat is in good condition for eating.

Paul Worsteling is a recreational angler and host of IFISH TV who supports a catch-and-release approach. “I always like to try to give the fish the chance for release first, and if release doesn’t work, then I’m happy to take the fish home and eat it because I love eating fish,” he says.

Paul Worsteling has spent more than two decades trying to capture a Swordfish, and has now caught several – including a 350-kilogram monster that he caught with Sean Tracey and the team.

“Even after five hours and 10 minutes of driving and pulling, it nearly broke me, but that fish just pulled the hook out, swam away, and it’s still swimming along merrily and that’s why they’re the most epic creature ever,” he says. That fish has been swimming around for three months with a satellite tag attached and Sean Tracey says the team are looking forward to getting the data back later this year.

In all that time, Paul Worsteling has only ever taken home one Swordfish when it was clear the fish was not going to survive. He argues that Swordfish should be given a chance to survive after being caught.

Sean Tracey says things such as hook choice could improve the chances of a fish surviving – for example, using a circle hook instead of a ‘j’ hook – and is also interested in tactics that might cut down on fight time.

“The issues currently lie more around responsible fishing practices and making sure we understand how the fish responds to the recreational catch, so if someone chooses to release one, they have fact-based information on hand to decide whether it is the right thing to do on a case-by-case basis.”