It's curtains for seabird conflict 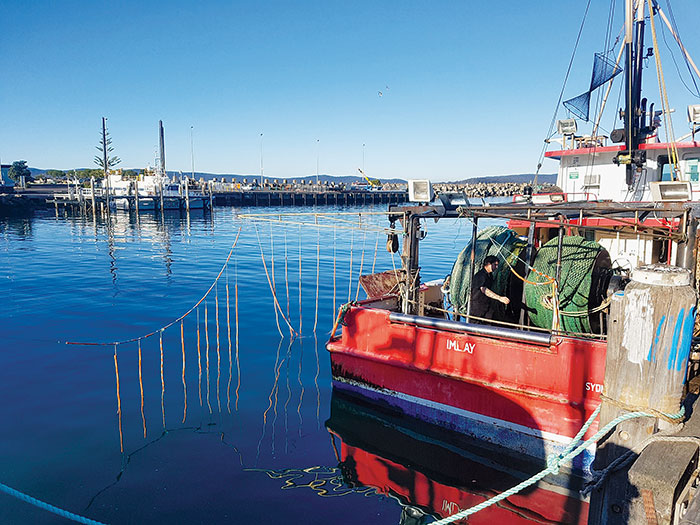 Curtains of brightly coloured plastic ribbons hung from doorways to keep out the flies are an iconic part of summer in Australia. And now a similar concept has been adapted to fishing vessels – to keep seabirds away from the fishing gear at the back of boats.

Known as ‘bird bafflers’, this world-leading innovation deters seabirds from foraging between the stern of the fishing trawlers and the area where net warp wires enter the water – where unwanted bycatch and offal are discarded overboard.

In the past, the Australian Fisheries Management Authority (AFMA) has required demersal trawlers in Commonwealth fisheries to use pinkies to deter seabirds – bright red, pink or orange inflatable buoys attached to the warp wires at the back of the boat.

However, after rigorous testing and at the request of the fishing industry, AFMA has now added the bird bafflers and also a bird sprayer to its list of approved bird-deterrent devices.

The bird sprayer is a comparatively complex technology, costing about $45,000, while bafflers cost $4000 to $5000. Pinkies cost about $1000 per vessel, allowing for two in use and several onboard spares.

Both the baffler and sprayer were developed and trialled in Australia following a government-funded study tour to New Zealand in 2014 to identify and adapt seabird deterrents that might be more effective than pinkies.

The executive officer of the South East Trawl Fishing Industry Association (SETFIA), Simon Boag, says fishers supported AFMA’s mandatory use of pinkies to reduce seabird interactions when this regulation was introduced in 2010. Pinkies reduce seabird warp strikes by about 75 per cent compared with unprotected warps with no mitigation device.

“However, pinkies can become tangled in fishing gear,” Simon Boag says. “And we believed we could do better to further reduce interactions with seabirds.”

From the eight devices initially proposed, the baffler and the sprayer were short-listed for further trials. The project team included representatives from the Australian Antarctic Division, CSIRO, AFMA, OceanWatch and the fishing industry. The project was led by Fishwell Consulting and trials were conducted over 12 months.

“Australia is leading the world in minimising risks between seabirds and trawl vessels,” says Christian Pyke, executive officer at the Great Australian Bight Fishing Industry Association. The southern Australian trawl fleet is the first small-vessel fleet in the world to mandate the use of proven devices on all vessels to minimise risks associated with trawling and seabirds.

At the opening of the 2017-18 fishing season in the Southern and Eastern Scalefish and Shark Fishery all but two active demersal board trawlers in the fishery have installed the new bafflers. These include vessels in the South East Trawl and the Great Australian Bight Fisheries.

One vessel is using the bird sprayer, and one part-time vessel is continuing to use pinkies. Where pinkies are used, fishers must not dispose of any offal while fishing.

Bird bafflers contain two booms, one on the port and one on the starboard stern quarters, which extend perpendicular to the sides of the vessel, past where the trawl wire enters the water. The booms have brightly coloured droppers hanging down to the waterline, which act as a curtain, and tori lines extending from the booms.

During the past few months, Chris Andrew and his crew have been tweaking the new bird bafflers onboard their trawler, the Tullaberga, to ensure they are working as effectively as possible.

He says the bafflers are more effective than pinkies in keeping birds away from the warp wires, which is the main aim. But they are also proving much safer, simpler and faster for the crew to use.

“We don’t have to hang out over the boat to bring them in, like we have to with pinkies,” he says. “In a 30 to 40-knot wind, that’s dangerous for the crew.

“I have a hand winch to pull in the bafflers and then we use a gaff to pull them into the side of the boat when we need to. Particularly in difficult weather, I don’t have to wait until the pinkies are pulled in and we don’t get pushed off the shot,” he says.

While Lakes Entrance is home for the Tullaberga, the 150-tonne trawler fishes along the south-east coast to Eden in NSW and around King Island and Tasmania, spending four to six months working from Hobart over summer.

Chris Andrew says seabirds are an issue all year round, particularly albatrosses. Mutton birds are also common in summer, but begin their migration, moving away as winter approaches.

He says when the weather is deteriorating the birds can become ferocious in their battle for food, and it can be difficult to keep them away from the vessel. They can gather behind boats, up to 1000 birds at a time, all in competition with each other. But the bafflers have been successful in keeping them out of the danger zone.

Why are bird bafflers so bright? 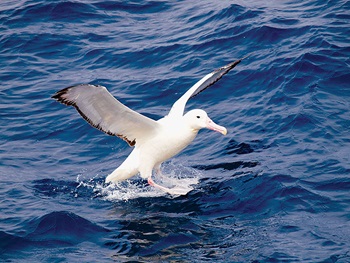 Bird bafflers use brightly coloured droppers – ribbons of orange or red pipe hose or sometimes even rope – that hang off the metal boom arms and backbone of rope. Recent science has confirmed earlier research that seabirds can see these bright colours.

In the 1970s, researchers found that albatrosses and giant petrels were attracted to orange and red-coloured rubbish on the ocean surface, anything from orange peel to red paper packaging. A test using paper balls in 10 different colours with equivalent light-reflecting qualities showed that some birds preferred the orange and red-coloured paper balls, followed by pink, yellow, blue, white and green respectively.

At the time researchers theorised this was because albatrosses and petrels were targeting items that were a similar colour to their food, such as krill and the shrimp-like mysids.

When it comes to fishing vessels, it seems birds are attracted by the smell of fish and offal and also use visual cues such as bright colour to locate food, and then touch to determine whether or not it can be eaten.

In 2011, a US study found that birds can see colours that are invisible to humans because they have additional colour cones in their retina that are sensitive to the ultraviolet range. So using bright red and orange colours for bafflers and buoys means birds can see them clearly and can avoid collisions.

'How to construct a bird baffler' – AFMA instructional video