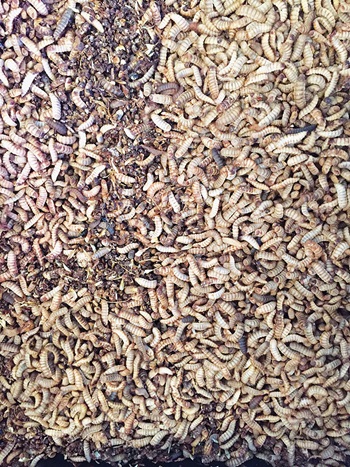 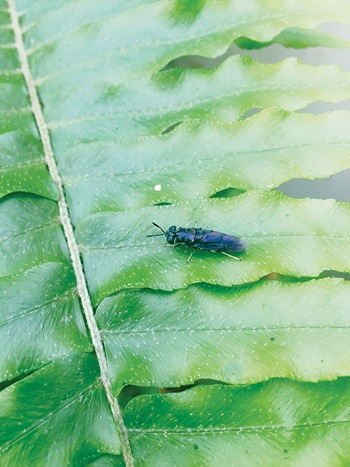 International research, including work in Australia, is investigating the potential of using insect larvae as an alternative protein to the fishmeal used in aquaculture feeds. A reliance on meal and oil produced from wild-harvest fisheries is a major criticism of aquaculture as a sustainable industry.

The non-profit research and development agency WorldFish estimates that up to 17 million tonnes of fish – about one-fifth of the global catch – is used to produce feeds for aquaculture.

In Western Australia, environmental scientist Luke Wheat is one of the founding directors of Future Green Solutions, which is using organic waste to produce black soldier fly (Hermetia illucens) larvae as a potential protein alternative to fishmeal.

The fly is native to the African continent but has naturalised as a non-pest species in Australia since it was first identified here in the 1970s. It can eat up to 70 per cent of its own body weight in a day, and 10 kilograms of wet organic waste can produce one kilogram of maggots.

Luke Wheat says he first began working on the potential of fly larvae after hearing about it six years ago. “It really appealed to me because it ticks so many environmental outcomes in one process,” he says.

“It reduces waste to landfill and reduces ongoing greenhouse gases from that waste in landfill. As an alternative to fishmeal and fish oil, it reduces reliance on wild-caught fish. And for food security, it allows the production of aquaculture from a sustainable protein source. We are trying to develop oils as well, but meal is the most immediate market,” he says.

The business is currently establishing proof of concept and production processes for larger-scale commercialisation, and will move from Geraldton to a new full-time demonstration plant in Perth later this year to increase production. A pilot plant processing 10 to 20 tonnes of waste a day and producing a tonne of protein meal a day could be operating in less than three years.

Luke Wheat says while black soldier fly larvae will eat almost any organic matter, the business is researching which inputs will provide the best growth and nutritional outcomes for use in animal feeds, including aquaculture. This includes research on potential contaminants in inputs such as heavy metals or pathogens.

Potential feed sources include dairy, meat and horticultural wastes. “We have to make sure the product is safe, and fish and the aquaculture industry are even more sensitive to this than other animal industries.”

While proteins are the priority for Future Green Solutions, Luke Wheat says he expects further research will investigate the potential for omega-3 oils from insect larvae.

The company is working with the University of Western Australia to fill some of these information gaps, with a cross-disciplinary team that includes biology, entomology and engineering expertise.

Other partners include feed manufacturer Ridley Corporation and the WA Department of Fisheries. Fisheries scientist Craig Lawrence is leading a growth and digestibility trial this year, incorporating insect protein into feeds for Rainbow Trout fingerlings and yearlings. “There’s a small trout industry in WA and the species is closely related to Atlantic Salmon, so we think this is a good place to start,” Luke Wheat says.

Similar but independent research is also underway in the east African country Tanzania, with the help of the Australian Government international aid initiative InnovationXchange.

The Recycler is a waste-management and recycling company that uses black soldier flies to treat the organic waste it collects, producing an insect-based protein. The business is one of 10 winners to receive a share in the Australian Department of Foreign Affairs and Trade’s $3 million Blue Economy Aquaculture Challenge last year.

The Recycler’s protein is being trialled in aquaculture feeds in Tanzania, according to a report from project partner SecondMuse. In the report, aquaculture operator Jonathen Arul says the insect protein will make up 25 to 30 per cent of a complete fish feed for trials at Indian Ocean Aquaculture.

These will compare different insect-based formulations fed to Tilapia raised in his company’s ponds and recirculated aquaculture systems to maximise its performance before it is put on the market.

Jonathen Arul will be a speaker the national Seafood Directions conference from 27 to 29 September in Sydney. His presentation will focus on the challenges of aquaculture in developing countries, which include sourcing affordable feeds.