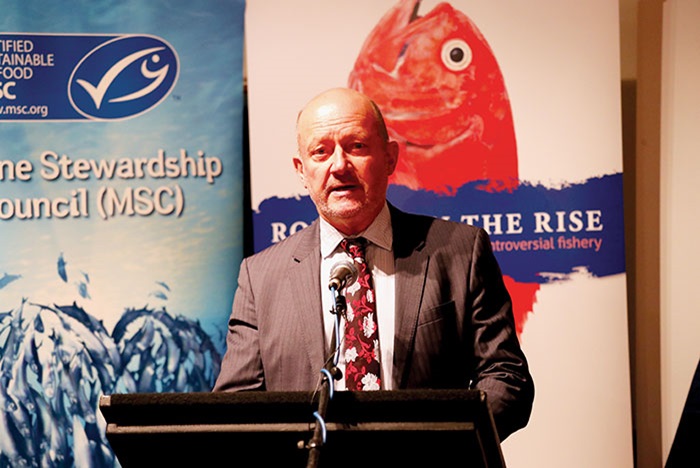 Other names: Slimehead, deep sea perch, red roughy, orange ruff.
Description: A bright reddish-orange deep-sea fish, it can grow up to 75 centimetres long and weigh as much as seven kilograms. It is commonly harvested at 1.25 to 2 kilograms and 50 centimetres long.
Life span: More than 100 years; reproductively mature at 27 to 32 years.
Cooking: It has a highly versatile, moist white flesh with a mild and delicate flavour. 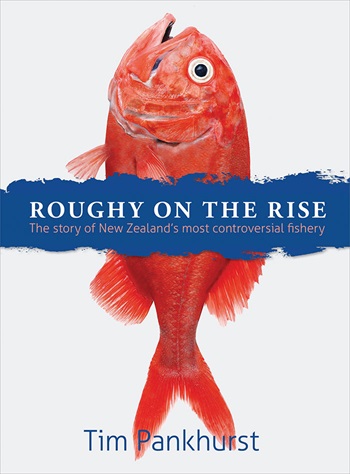 Roughy on the Rise is the name of a new book focusing on a warts-and-all history of New Zealand’s Orange Roughy fishery and its “resurrection” from the brink of collapse. It is a remarkable story, says author Tim Pankhurst, which also reflects the history of Australia’s own recovering Orange Roughy fisheries.

But for New Zealand in particular, Tim Pankhurst says, the story speaks to the larger issue of public confidence in the behaviour of the seafood sector.

He says Roughy on the Rise was produced as an unvarnished account of events at the behest of the seafood sector. A former journalist, editor and publishing industry representative, the book was a sideline to his full-time advocacy role at Seafood New Zealand, the New Zealand fishing sector’s peak body, where he has been the chief executive for the past four years.

This July, the body launched a new campaign aimed at developing public trust in New Zealand’s seafood industry. Tim Pankhurst says the campaign includes recognition that mistakes were made. It also highlights the initiatives and long-term commitment the industry is making to improve its performance. He says this is the epitome of what has occurred in the fishing of Orange Roughy.

The industry’s ‘promise’ campaign is a three-year project largely funded by Seafood New Zealand’s eight largest stakeholders, all of whom are represented on the organisation’s board of directors.

Smaller quota holders have also seen the worth of the campaign and have contributed.

When the Orange Roughy fishery was first discovered in the early 1980s, it was quickly exploited. “It was an instant gold rush and the market just couldn’t get enough,” Tim Pankhurst says. “Some boats in both New Zealand and Australia were so overloaded with catch they sank. There were extraordinary risks, but also extraordinary rewards.”

Acoustic tracking technology to locate schools was initially rudimentary, but fishers quickly learnt through trial and error the best way to target these deep-sea fish, often found at depths of more than one kilometre.

At its peak, New Zealand fishers were catching 63,000 tonnes of Orange Roughy a year. But as catches declined and the science revealed more about the long-lived roughy, several fisheries were closed. Today the total allowable commercial catch across New Zealand’s four fishing zones is 8700 tonnes a year.

“We estimate we catch four in every 100 fish, and the population is slowly recovering,” Tim Pankhurst says. “We see it as a story of redemption, but also a story of the resilience of the oceans. Well-managed fisheries can and do recover, and this has happened around the world.”

In December 2016, the three major Orange Roughy fisheries received certification as sustainable from the Marine Stewardship Council (MSC). In awarding certification, the MSC said it was the “biggest news story ever in the New Zealand fishery”.

Tim Pankhurst says although there are still some doubters about the fishery, the MSC process is a rigorous one: all 32 environmental or social criteria must be met. “You don’t see Orange Roughy for sale in New Zealand very often, which I think contributes to the perception that it’s still at risk, but in reality most of it is exported.”

Today the New Zealand fishery is worth $60 million a year, and, in the past four years, China has overtaken the US as the major buyer with a preference for whole fish, which effectively doubles the return to fishers.

At the launch of Roughy on the Rise in April 2017, chief executive of New Zealand’s Deepwater Group George Clement said the return of Orange Roughy to a sustainable fishery had taken two decades of dedicated work by the industry.

The rebuilding of the fishery was the result of a significant change in attitude, from exploitation to a solid commitment from industry to sustainable fishing.

“It has been a long and challenging process. In the late 1990s it was clear that we needed to start from scratch as we attempted to gain reliable, scientific data on the Orange Roughy stocks to establish the sustainable yields and to put in place a management system that allowed the stocks to rebuild in size.

“We’re proud of what we have done. The direct investment in science and innovation by industry to ensure the Orange Roughy fisheries are sustainable is around $35 million since 2000.”

Tim Pankhurst says the story of Orange Roughy is part of the larger picture of the New Zealand seafood sector’s commitment to better manage fisheries resources for the long-term benefit
of the public.

The public trust campaign launched in July has been born of the frustration of ongoing negative reporting about issues such as overfishing, bycatch, discards and endangered species, despite significant industry improvement.

“We know our fisheries are well regarded internationally, and quota systems have helped to build sustainable fisheries. The science confirms this.

“But we haven’t been able to get this message across. This campaign is a promise to the people of New Zealand that we will do the right thing and we are committed to improving our performance.”

He says a film crew and photographer have captured that commitment during a two-week tour of the country visiting fishers and seafood processors who are telling their own stories in their own words.

A promotional campaign on television, radio and social media will be complemented with longer web episodes highlighting how important sustainable fisheries are to the fishers themselves, and also the role that fisheries play in supporting communities.

“We will be closely tracking the results and any changes in the public perception of the seafood sector.” He says the campaign is entirely industry funded as part of Seafood New Zealand’s industry advocacy role.

As chief executive of Seafood New Zealand Tim Pankhurst will be speak at the national Seafood Directions conference at the International Convention Centre, Sydney, from 27 to 29 September 2017.