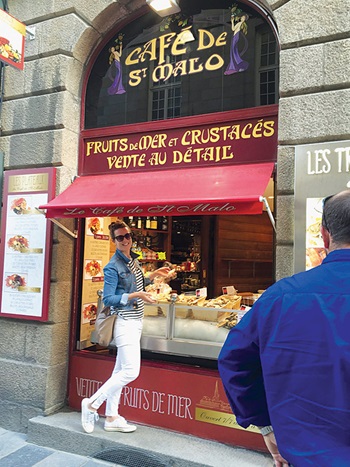 As she searched for strategies to more successfully brand Australian seafood as a luxury product during her recent Nuffield Scholarship studies, Tasmania’s Abby McKibben identified several approaches applicable to the seafood sector as a whole.

These include making the consumer experience central to the marketing of the product and having other people – independent third parties – endorse the product or tell its story.

Abby McKibben is the brand manager for Huon Aquaculture, one of Australia’s largest Atlantic Salmon producers. The initial impetus for her Nuffield Scholarship was ‘luxury’ seafood branding and the importance of provenance for products such as Huon’s Atlantic Salmon caviar.

During her scholarship she travelled through the food-producing regions of Europe and the UK, visiting leading producers and investigating their marketing strategies – everything from the Guinness factory in Ireland to the Terra Madre food festival in Italy. However, she says a presentation from one of Coca-Cola’s senior marketers during the North American Seafood Expo in Boston most effectively consolidated what she had learned during her study tour. Principally, this involved highlighting the consumer experience.

“I realised, for instance, that we had been focused on selling Atlantic Salmon farming, not the experience of eating salmon. We had photos of our production pens, but we didn’t have images of people eating salmon.” Abby McKibben believes it’s something that the seafood sector as a whole can take on board.

The importance of provenance was also clear, particularly throughout Europe and the UK, where products were widely branded by the point of origin.

“In Australia we produce some of the highest-quality seafood in the world, in extremely pristine and environmentally sound locations such as Tasmania. This provenance story will become more important for the success of our industry, with increasing competition from lower-quality imports,” she says.

The successful marketing of a provenance has the ability to confer a ‘halo effect’ on other products from the same region. However, she says most Australian provenance marketing does not have a real supporting quality assurance framework to increase consumer confidence in the associated product quality – something she believes will become more and more important.

She says Huon was lucky to have been tagged on social media by leading international road cyclist Richie Porte, a Tasmanian who is a fan of the company’s hot smoked salmon products. As an athlete (and one of the favourites for the 2017 Tour de France), he frequently talks about his diet; his endorsement of their product is authentic and he has officially become an ambassador for the Huon brand.

“Consumers see through the spin,” Abby McKibben says. “Having others who endorse your product, whether that’s medals at fine food awards, or consumers who love your product, those independent endorsements have far more power.”

She says the Nuffield Scholarship program was an extremely valuable experience, both professionally and personally. Interactions with other scholars involved in primary production from around the world, all with different mindsets and perspectives, challenged her views and perceptions. “It’s the kind of experience you just can’t buy,” she says.

The 2018 Nuffield Scholarship program provides a $30,000 bursary that allows primary producers to research an issue of their choice, assisting with up to 16 weeks of international travel, including a six-week Nuffield global focus tour.