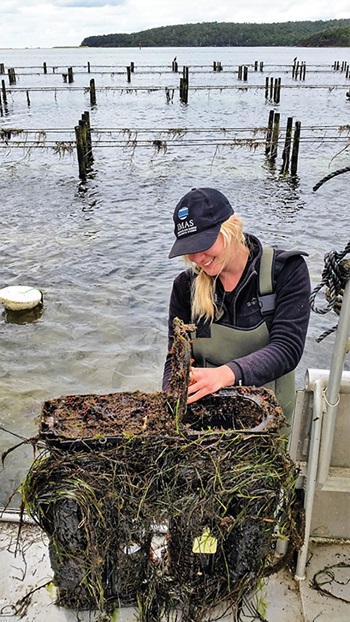 In 2016 Tasmanian oyster farmers joined those from NSW facing the new reality of life with the ongoing threat of Pacific Oyster Mortality Syndrome (POMS). The exotic virus OsHV-1, which causes POMS, killed up to 95 per cent of Pacific Oysters during an epidemic in some parts of Tasmania early last year.

Since then, a new coordinated and collaborative research and development network has been established to help secure the productivity and profitability of the oyster industry – the $5 million Future Oysters Cooperative Research Centre Project (CRC-P).

The CRC-P includes $3 million from the Commonwealth Department of Industry, Innovation and Science. Through an existing industry partnership agreement, Oysters Australia, the FRDC and other partners have collectively invested another $2 million.

The CRC-P’s three programs are:

A key CRC-P goal is to breed POMS-resistant Pacific Oysters and to manage the supply of disease-resistant broodstock to hatcheries in NSW, Tasmania and South Australia, which have different biosecurity and risk-management requirements.

Playing a key role is Australian Seafood Industries (ASI), managed by Matt Cunningham, a company established in 2004 in part to selectively breed oysters. “Having a Pacific Oyster breeding program in place in Australia meant that within a month of the POMS incursion in NSW seven years ago, we had family lines growing in the affected sites so we could test their level of genetic resistance,” Matt Cunningham says. “Commercial hatcheries now have access to Pacific Oyster broodstock that display 70 to 80 per cent POMS survival when they are one year old.”

Biosecurity restrictions that prevent the movement of oysters bred in Tasmania to South Australia have left oyster growers in SA with difficulties sourcing enough spat. Funding from the Future Oysters CRC-P has made it possible to establish a breeding hub at the South Australian Aquatic Science Centre.

Other CRC-P funding through the ‘Healthy Oysters’ program allows researchers, led by Christine Crawford from the University of Tasmania, to work closely with oyster growers on farms in POMS-affected areas in Tasmania.

Key research issues include understanding the POMS window of infection and how the virus spreads. It is also developing fast and cost-effective techniques to detect the POMS virus, and management practices that allow industry to operate in the presence of the disease.

The data being collected will eventually be used to develop a predictive model to help the oyster industry forecast POMS danger periods.

In the meantime, Christine Crawford, together with John Preston from Biosecurity Tasmania, provide a monthly newsletter to oyster farmers, available on the University of Tasmania’s website.

While OsHV-1 virus causes mortality in oysters, the disease cannot be transmitted to humans and there are no health implications from consuming Pacific Oysters from POMS-affected region