They might be prized as a source of protein in some parts of the world, but in Australia carp remain defiantly among the nation’s four most disliked vertebrate pests. Since it was launched in May 2016, the headlines surrounding the FRDC-led National Carp Control Plan (NCCP) have focused on the eradication of carp. But ultimately, according to NCCP coordinator Matt Barwick, it is not actually about carp.

“It’s a program about recovering our native fisheries and waterway health. It just so happens that controlling carp is the tool through which we think we can do that,” he says.

Over a three-year period, with $15 million of funding from the Australian Government, the NCCP will address a range of knowledge gaps to better understand and manage the risks should the carp virus, known as CyHV-3, be released. In that vein, the NCCP will support a raft of research, incorporating risk analysis, analysis of benefits and costs, synergistic carp control measures and, importantly, how to deal with the clean-up.

Since the mid-19th century, carp have spread through Australia’s fresh waterways like a virus. They now make up 80 per cent of the total fish biomass in some Australian waterways, and up to 93 per cent in some highly infested areas.

These populations took off at a time when Australia’s waterways and native fish communities were at their lowest ebb. “Our waterways were in a really poor state of health back in the 1960s and ’70s and, for carp, it was the perfect storm for them to really take off,” Matt Barwick says. Combined with their bottom-feeding habit, which stirs up sediments, increases nutrient levels and reduces sunlight penetration, their numbers represent an ecological disaster.

>Fortunately, over the past decade there has been increasing investment in the restoration of native fish habitat and migratory pathways, improvement of water quality and delivery of more natural flow regimes.

>Snags – large dead trees and branches sunk into waterways – were once the curse of paddle steamers and irrigators, so over the course of nearly a century they were removed from many river systems. According to Jarod Lyon, principal research scientist at the Arthur Rylah Institute for Environmental Research, this had devastating consequences for native fish species such as Murray Cod and Golden Perch.

One project to re-snag a section of the Murray River involved dragging about 5000 large snags, each weighing at least one tonne, back into the river. Other research through innovative projects such as the Victorian Environmental Flow Monitoring and Assessment Program is exploring how best to use environmental flows to help beleaguered native fish populations recover.

“There’s been a lot of work done over the last 10 to 15 years exploring how to deliver flows and manage rivers in a way that provides conditions that native fish need to spawn,” Jarod Lyon says. “Now we have that part of the equation worked out; we’re also looking at the importance of using river flows to promote connectivity between rivers.”

Recent research around the Goulburn River in Victoria found that some of the Golden and Silver Perch captured there were actually coming to the river from hundreds of kilometres away. 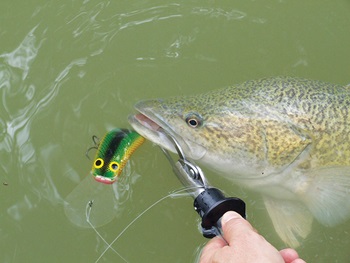 Murray Cod being released after capture in the Murrumbidgee River.

While understanding and restoring the complex ecology of inland waterways is an important piece of the puzzle, another significant aspect of the NCCP’s remit is to explore the potential risks inherent in releasing the carp virus.

“We need to understand all those dimensions of risk and ensure that we can manage them,” Matt Barwick says.

The ecological dimension of risk is a complex one. For all the damage that carp have wrought in Australia’s river systems, it’s worth remembering they have been in Australian waterways for decades, and some other species eat them. What happens when that food source diminishes?

To date, research has shown that for key predatory native species such as Murray Cod and Golden Perch, native prey is the preferred diet; carp are a less palatable option.

“There is really interesting research that shows if you can significantly reduce carp numbers, it can result in up to a fourfold increase in important food items such as zooplankton and small-bodied native fish species,” Toby Piddocke, project manager of research under the NCCP says. “Importantly, increases in small native fish – little gudgeons, rainbowfish and things like that – could add more biomass than that of the carp removed, which means there could be even more food available for native predatory species if carp numbers are reduced.”

However, the sheer biomass of carp clogging Australia’s waterways adds up to a lot of decomposing fish in the event of the virus’s release. This makes the risk to water quality for humans and animals a high priority. Consequently, this issue is the focus of careful investigation to understand how different carp biomass levels affect water quality, odour, taste and bacteria levels.

Opportunities to stage the release of the virus using natural and man-made barriers to fish migration will also be explored, along with improving estimates of carp biomass levels within affected catchments, exploring the most efficient methods for harvesting dead carp and resolving options for use or disposal.

In the eight years since it was first understood that this virus might be used as a biocontrol measure in Australia, a huge amount of research has gone into understanding its potential and how to exploit it. Toby Piddocke says the carp virus attacks the gills, skin and kidneys of carp of all ages, with a mortality rate of 70 to 90 per cent.

But even the most optimistic estimates of the initial kill rate can not ignore the fact that resistance may develop. Modelling from CSIRO suggests that carp populations might recover to about 30 to 40 per cent of their original levels in just 10 years unless followed up with additional control measures.

“The evidence we have shows that the carp virus will be very effective on common carp. However, examples of pest control for other species really highlight the need to consider secondary control measures, possibly in the form of a sex-biasing construct,” Toby Piddocke says.

This refers to a genetic modification introduced into carp populations so they produce offspring of only one sex, or all the offspring of one sex die at an early age, before they have the chance to breed. Sex-specific control methods are used for other pests such as mosquitoes, so one of the NCCP’s areas of focus will be to explore these other options.

Carp eradication will be a vital part of the effort needed to recover Australia’s inland fisheries and waterways. A lot is riding on the NCCP and, while some previous biological control measures have not gone as well as hoped, Matt Barwick is optimistic.

The very fact that we are here now, with funding from the Australian Government, to do this careful planning and research over the next two years is due to the fact that the bene ts that carp control would deliver are significant.”