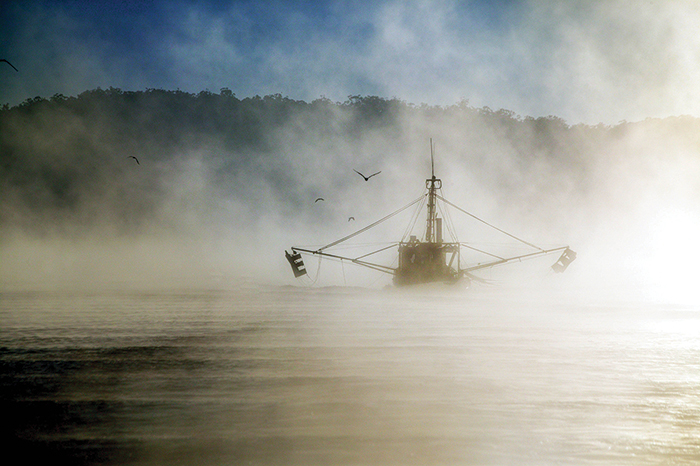 After more than 20 years of research, Australian prawn trawl fisheries already have an extensive ‘toolbox’ at their disposal to improve efficiency and reduce environmental impact. Trawl nets are the only way to catch Australian prawns so these innovations are vital if we want to continue to eat Australian wild-catch prawns. But the adoption of different gear modifications and operational strategies has varied considerably between fisheries.

To help industry better match and modify existing solutions to suit specific prawn fisheries, the Australian Council of Prawn Fisheries (ACPF) is developing a plan to take the existing ‘toolbox’ of developments to ports around the country.

This follows a two-day workshop in Sydney in February, attended by industry representatives from all prawn trawl fishing states, as well as fisheries managers, researchers and gear modification experts. The aim of the workshop was to identify further research needs, particularly those related to reducing bycatch and improving fuel efficiency.

At the workshop, an overview of work already undertaken and discussions of industry issues, state by state, identified that extension of existing bycatch mitigation measures and their suitability should be the priority, rather than new projects. The workshop report is available on the FRDC website.

The ACPF and the FRDC hosted the workshop and ACPF executive officer Rachel King says it proved a good opportunity to exchange ideas between fisheries, and between researchers and industry. “We found the fishers attending were keen to share their experiences and learn from each other,” she says.

Workshop participants were also keen to get a better understanding of research being done overseas which might have applications in Australia. This included initiatives in Europe as a result of the implementation of the Landing Obligation (often referred to as the “Discard Ban” involving the phasing-out of discarding of certain species).

The ACPF is planning portside preslp evaluate the onboard performance to ensure the solution fits the need and to increase adoption where appropriate”.

The ACPF is planning portside presentations of the prawn trawl research to help fisheries “gear match” existing tools to address specific operational issues. Dates are in the process of being finalised.

“It’s important that these aren’t just ‘talk and leave’ events,” Rachel King says of the proposed presentations, for which dates are still being finalised. “We need co-investment from industry and research agencies to help evaluate the onboard performance to ensure the solution fits the need and to increase adoption where appropriate”

One such project has been undertaken in the Northern Prawn Fishery (NPF) where industry aims to reduce bycatch by 30 per cent. The NPF Industry recently trialled a number of innovations aimed at reducing bycatch and worked with the Australian Fisheries Management Authority and CSIRO to ensure scientific validation of the results.

Among the designs trialled is a new bycatch reduction device (BRD) known as the Kon’s Covered Fish Eyes (KCF) device.  The CSIRO analysis of the data collected during the scientific trials showed the KCF BRD reduces small fish bycatch by an average 36.7 per cent compared to the Square Mesh Panel BRD, with no prawn loss.

In spite of the success in the NPF, these results may not translate directly to the same level of effectiveness in other prawn fisheries. The KCF BRD could be trialled in other fisheries but further modification of this and other BRD designs may be required to suit different fishery conditions.

The sharing of the onboard experiences between fishers can provide valuable information to improve adoption of new gears – what worked, what didn’t and any tweaks which might have been made, which is all often undocumented. Greater networking between fishers and fisheries is expected to be an important part of these future extension efforts.

FRDC program manager Crispian Ashby says there have already been significant reductions in bycatch and improved fuel efficiency in prawn trawl fisheries over the years. BRDs for a wide range of species are already widely used although, as the NPF project indicates, further improvements can be made.

Crispian Ashby says most modifications have focused on the cod-end of the net and helping non-target species to escape. Prawn nets use smaller mesh than general fish trawl nets, because prawns are generally much smaller than fish.

“The unintended consequence is that the nets retain small fish that might be in the same area as the prawn trawl’s path, and we end up with fish that are not targeted, but which are brought onboard."

“The public perception of this – fish that are discarded – is one of a potential protein source being wasted. There are also other potential ecosystem impacts that might come from reducing quantities of fish."

“We have done a lot of research looking at the back end of the net, the codend where the catch aggregates. BRDs – fisheyes, radial escape sections, square mesh panels, square mesh cod-ends, grids, turtle excluder devices – they are all about trying to sort the catch as it starts to collect towards the back of the net."

“This is sometimes achieved by manipulating water flow characteristics in the net. As the net is towed through the water, the way the net displaces water creates areas of high and low velocity. By understanding how fish behave in the net, and swim differently to prawns, you can use water flow to encourage fish to move toward the exits.”

More recent work has focused on modi cations to the anterior trawl – the front of the net – looking at the trawl boards, foot ropes and headlines to reduce drag and disturbance of the sea floor.

The more drag, the more power the trawlers need and the more fuel they use. Strategies to reduce drag include using a ner twine, increasing the mesh size, changing the net mesh orientation and even using di erent knot con gurations.

Research in NSW has found that combinations of many smaller nets rather than one larger net can reduce drag and fuel use, while maintaining the same ‘swept area’ of each trawl and therefore the same potential catch.

The trawl or otter boards used to hold openthe nets are essentially solid objects being towed through the water. the larger the net, the larger the boards and the greater the drag they create. Reducing the time the net is towed through water has also been shown to reduce bycatch. Less bycatch reduces the potential damage to the targeted prawn catch and increases the value of the catch.

“There is a lot of knowledge about what can be done,” says Crispian Ashby. “Now the issue is getting that out to the industry, and helping to trial modi cations that will work for them.”

To be properly tested, gear and BRD trials need to happen during actual fishing periods. e trials need to be well designed and scientifically robust to make best use of sher’s time and investment. 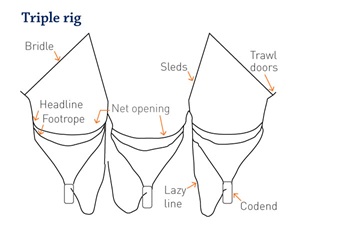 Bycatch in the double rig was reduced by 26 per cent compared to the single rig, and by 44 per cent in a triple rig.