Memories made with the right ingredients

Fresh, local, high-quality seafood has helped create a successful formula for the most recent winner of the National Fish and Chips Award 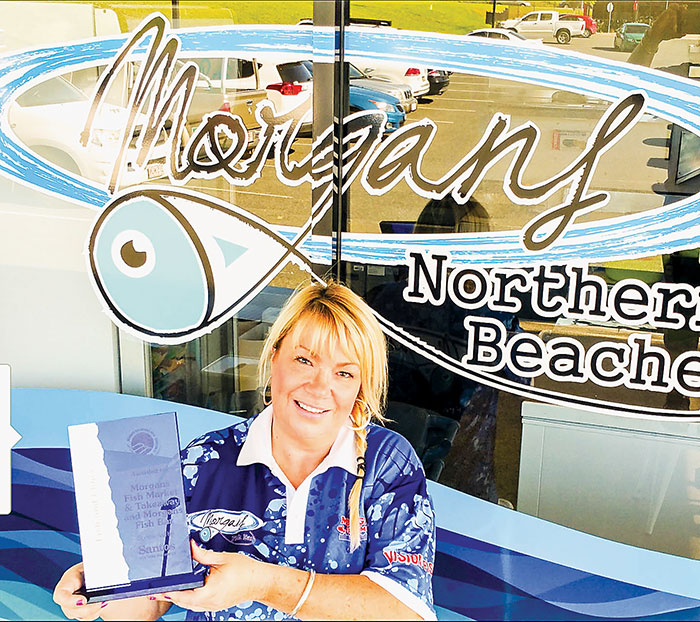 A salty breeze, the sound of the ocean and pesky seagulls wanting to be included in a delicious meal of fresh, battered fish and hot, crispy chips form an enduring memory for Kelly Morgan. Her earliest fish and chips recollection involves Sydney’s Manly beach and her grandfather.

Memories can be powerful connections to our past and to our present communities.

When love and opportunity saw her open her own fish and chips shop in central Queensland years later, she wanted to offer her customers the same quality and freshness she remembered from her childhood. “It needed to taste fresh and like it came from the ocean,” she says.

For Kelly Morgan, who won the National 2015 Fish and Chips Award, her earliest recollections have not only helped to create a successful business, but are helping to build links between professional fishers and the public.

Her journey to becoming an award-winning operator began when she met and fell for a third-generation commercial reef fisher, Andrew Morgan, 15 years ago.

Although a registered nurse with a 17-year career, she saw a demand in her new local area – Mackay, north Queensland – for freshly caught seafood and decided to take a chance. So in 2006, with an esky and some ice, she took a break from nursing and started selling Andrew’s catch from the back of her LandCruiser – with the motto ‘Fresh from the fisherman’s wife’.

That catchphrase helped her spell out the link between professional fishers and the public. “I felt I had a responsibility to promote the industry in a positive way and I still do. I have always been proud to be a part of the Queensland fishing industry and promoting it in a positive way to the public is important to me. We can educate and involve the public by giving them the ability to make informed choices about the seafood they are eating, doing the best to make Australian seafood a prominent choice to consumers.” She soon found the LandCruiser was not big enough; nor was the refrigerated truck that followed.

“The business snowballed,” she says. “I started our first shop, but we soon outgrew that and moved to larger premises.” Now the Morgans have three retail fish and chips and fresh seafood stores in Mackay, employing 40 staff, in addition to Andrew’s commercial reef line business.

As a relative newcomer to the industry, Kelly Morgan knew what she wanted her business to emulate: “We had access to a fresh, quality product and I wanted our retail outlets, staff and professionalism to match those attributes.”

As well as Andrew’s catch, Kelly Morgan also sources seafood from other local boats and relies heavily on a local wholesaler to provide her with enough fish to meet ever-increasing demand.

The fish sold is seasonal. When Barramundi and reef closures are in place, stock needs are assessed and snap-frozen product is used.

The most popular fish tend to be Red Throat Emperor or Barramundi. “We sell Spanish Mackerel as our fish of the day and it is popular with locals,” Kelly Morgan says.

The most popular way to cook it is hard to gauge; locals are keen on both crumbed and battered options, she says.

“Crumbed fish is very popular and we use a coarse, breaded crumb, which gives a nice crunchy texture. That said, battered is a favourite as well and I think the lighter and crunchier the texture the better it tastes and the less oil it holds.”

Constant experimentation has led them to batter perfection. “After numerous batter trials we have found one that works and we make it daily instore. It’s light and it’s crispy – basically just self-raising flour, water, egg and food colouring that is well-mixed and kept refrigerated.”

The trick, she says, is to keep batters cold – it helps make the fish really crunchy.

Chips and potato scallops, also known as potato cakes, are equally important offerings. Potato scallops are made instore using an extra-large Golden Delight variety of potato. “We slice them skin-on, then pre-cook in batter, refrigerate, then cook again to order. We have been accused of having potato scallops bigger than our pieces of fish,” she jokes.

Combined, the retail outlets sell about 4000 kilograms of potato scallops a year.

An 11-millimetre cut product is used for chips and 1000 kilograms are sold in an average week.

The key to the crispiness of both potato products is the oil used, Kelly Morgan says.

Although cottonseed oil is used for fish and other products, the potatoes are cooked in animal fat, which she says gives the chips a better depth of flavour and crunchiness.

The Morgans’ crumbed fish uses a breaded crumb to give a nice crunchy texture.

For those customers wanting another seafood option or a gluten-free choice, an extensive range of fresh fish, salads, prawn cocktails and garlic prawn skewers are also on offer.

All fish is filleted and prepared daily instore in open, clean kitchens, where local prawns are peeled and crumbed for prawn cutlets, calamari is sliced and crumbed, and homemade fishcakes prepared.

“Freshness and quality are two of the most important things in my businesses and I know that is one of the main reasons our stores are so popular with the locals and tourists."

“We are proactive in complying with standard labelling and providence labelling so our customers really know what they are getting. Promoting wild-caught and locally sourced sustainable seafood increases consumer confidence in the industry.”

Kelly Morgan’s favourite fish is Barramundi, served lightly grilled with lots of lemon. “Oysters and champagne are one of my favourite mixes as well, but you can’t go past a big barbecue seafood feast with a nice crisp craft beer.”